5 Thoughts from the Weekend’s BPL Action

Matchday 8 brought us some great games after two weeks of international break. Here are some thoughts from the weekend.

If you read my article from two weeks ago, you may have figured out I have a bit of a soft spot for Southampton. Putting all that to the side for a moment, consider the Saints electric start to the new campaign.  Their 16 points from eight matches leaves them in third, and this weekend they banged eight past Sunderland. Southampton has not only continued its impressive play from last season but also managed to improve on that form. The new boys have certainly been a huge factor: Graziano Pelle has six goals and Dusan Tadic has seven assists. Their budding bromance aside, the two have come together to form a lethal attacking combination. The big question mark for Southampton is how long its run can continue. Southampton doesn’t have an especially deep squad, a factor that has brought down stronger teams in the past. Only time will tell whether they can handle the physical toll of the Premier League Schedule. But until then, the Saints will just keep marching in, and their fans will be happy to be in that number.

Saturday’s game at St. Mary’s told two drastically different stories. On the one hand, there was Southampton, who currently fly high at third. The other story is the much more depressing tale of Sunderland. The Black Cats have been a solidly bottom half team since their most recent promotion in 2007. They have somehow managed to avoid the drop due to what can only be described as some form of dark magic, and it looks like this season Sunderland fans will be hoping for yet another escape act. Eight points from eight games leaves them right above the drop zone. Admittedly, the margins are still small, and a few wins could put them in relative safety. However, with their truly awful defense, subpar midfield and total lack of production up front (I’m looking at you, Jozy Altidore), expect this season to be yet another tough one for Sunderland.

Sergio Aguero has had his ups and downs since moving to Manchester in 2011. His first season was a fantastic campaign that ended with Aguero securing City’s title on the last day with a last-second stoppage time goal against QPR. However, Aguero struggled in his second season. A mixture of poor form and injuries left much to be desired from his performances. His third season was better, but injuries limited his playing time. Those injuries may have been affecting him over summer, as he was really poor during the World Cup. But all that seems to be behind him now. Aguero put four past Tottenham with an outstanding solo performance. Sure, the last time Tottenham visited the Etihad they lost 6-0. And you wouldn’t be wrong in pointing out that two of his goals were from the penalty spot. And you still wouldn’t be wrong if you pointed out that he missed a third penalty. But you would be wrong if you said that any of those facts take away anything from his performance on Saturday. His speed and shooting ability make him one of the deadliest strikers in England, and nine goals on the season pretty much says it all.

I said it before and I’ll say it again: Liverpool lack quality in their squad. They have struggled for much of the season, and QPR exposed their deficiencies on Saturday. QPR are a really bad team.  They’re sitting at the bottom of the table with four points and a negative 12 goal difference, with just one win and one draw. That should make it all the more worrying that Liverpool left Loftus Road with a very, very, very lucky three points. The Reds were atrocious, particularly in the first half. Shockingly bad defending lead to some fantastic chances for QPR, with Leroy Fer rattling the bar twice. QPR were unlucky not to be in the lead after a dominant first half performance. Liverpool picked it up in the second half and ended up winning after a truly ridiculous ending to the game (where one goal was scored three minutes from time and three goals were scored in stoppage time). Ultimately, two own goals undid QPR. But Brendan Rogers will be counting his stars after Saturday. A mistake-prone defense that lacks cohesion nearly gifted a shock win to QPR. On top of that, the news that Daniel Sturridge will be out for another month will be of great concern to Liverpool fans, particularly with Mario Balotelli leading the line. While his truly awful miss has led to some truly hilarious tweets, his performances should be very concerning for Liverpool. Balotelli has just one goal for Liverpool which he scored against Bulgarian nobodies Ludogrets in the Champions League. The Reds better hope for a miracle, and they better hope it comes soon, or this could be a disappointing season for them.

5. The Season of Saido

I have a soft spot for unknown players, and Saido Berahino is (or was) a fairly unknown name in the Premier League. The young striker is a product of West Bromwich’s (fairly underwhelming) youth academy. If you haven’t heard of him before, you should hear about Berahino’s story, which is pretty incredible. He was born in Burundi during the nasty ethnic conflict of central Africa that was ravaging his country. His father died when he was young. His mother escaped to the UK through asylum and was trying to get asylum for Berahino. When he was just 10 years old, he escaped Burundi by himself and reunited with his family in England. He did not speak a word of English but used the game to settle into his new country. Berahino joined West Brom’s youth academy in 2004 and has impressed for England’s youth squads, particularly the U21 team, where he has 10 goals in 13 caps. He broke into West Brom’s first team squad last season, when he managed to notch a winner at Old Trafford. At just 21 years of age, it seems Berahino has found his footing this season, scoring his sixth goal of the League campaign on Monday against Manchester United. His pace, strength and work rate up front caused numerous problems for United’s defense, and his finishing isn’t too shabby either. I wouldn’t be surprised if Berahino gets called up to the senior squad during the next international break. Keep an eye out for him, because he could be the League’s (and England’s) next big thing. 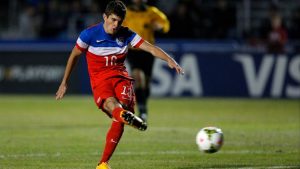 It’s Time to Treat Christian Pulisic Like a Star