Can the Thunder Rise Again?

Mere weeks ago, If someone had told you the Oklahoma City Thunder would start 5-12, you’d think they were crazy—or a still-disgruntled Sonics fan. But here we are, just past Thanksgiving with the Thunder fighting to stay out of the Western Conference basement. Of course, this weird state has come about thanks mainly to Kevin Durant and Russell Westbrook’s injuries, but the questions still remain: have the Thunder dug themselves too deep of a hole? In a larger sense, is their championship window closing?

With Durant and Westbrook set to return sometime in the next few weeks, the Thunder find themselves ahead of only the lowly Timberwolves and Lakers in the West. After compiling a winning percentage of over .700 each of the last three seasons, suddenly Scott Brooks and his team must learn to climb into a playoff race. With over sixty games remaining and two superstars set to return, this might sound easy. It’s not.

As of right now, ten teams in the Western conference have winning records (if only the Thunder were in the East, where that number falls to six). Besides the eight squads currently in playoff position, the Suns and Kings also have their sights set on the postseason. The next few weeks provide the depleted Thunder with ample opportunities for wins—against the likes of the Jazz, Knicks, and 76ers—and they must take advantage. Last year the Mavericks needed 49 wins to snag the eighth and final playoff spot. With ten (eleven, if one counts the Thunder) teams dreaming of the postseason, one has to expect a similar level of excellence being required to advance this year. That means the Thunder will need to play right around their past .700 level from here on out. Continued struggles without their stars will only make that number rise.

Reggie Jackson and Serge Ibaka have done their best to lead the Thunder these past few weeks, but strong supporting players can only do so much when asked to bear such a load. The Thunder rank 29th in the NBA in both points per game and field goal percentage, well behind any other teams in the West. Their defense has held up well in the absence of their leaders, but the barren offense does not bode well for several more Durant-less games.

The good news is Durant and Westbrook have started on-court workouts, but stepping back from these past few weeks, the Thunder’s story arc remains troubling. The stars both turned 26 this fall, so the time for panic has not arrived, yet championships still remain elusive. Durant has an MVP and four scoring titles, and Westbrook has found a home on the All-NBA second team, but their playoff pushes have grown stagnant. After an unsurprising rebuilding year in their incipient Oklahoma City season in 2008-2009, the Thunder quickly grew into a contender, winning 50-plus games the following season and reaching the conference finals in the spring of 2011. Next came the emergence of James Harden alongside the aforementioned stars, and with it a Finals appearance and an understandable defeat at the hands of LeBron’s  Heat.

All of that sounds great. Second-rate team growing into a contender with homegrown talent in the blink of an eye. Surely they were on their way to many Finals appearances and an eventual title. Then came “The Harden Disaster,” as one professional opiner put it. Some argue that beyond the financial repercussions of keeping Harden (totally worth it, BTW), the Thunder needed a change in chemistry or structure. I won’t get into that now, but suffice to say I side with the idea of having three of the ten best players in the world on my team. Since losing Harden, the Thunder have ended their seasons with a beatdown at the hands of the Grizzlies after winning 60 games and a conference finals loss to the powerhouse Spurs in last year’s conference finals.

Every basketball fan should be excited for Westbrook and Durant’s blitz to get their crew back into contention. Whether or not they climb back into playoff position, the Thunder will play as hard and fast as any team in the NBA. But even if they find a way in, can they validate their golden age? As a Celtics fan, I had hope for the Thunder as a replacement team. If the Celtics weren’t going to win it all, better to have the likable Durant take home titles than Kobe or LeBron. Now it’s hard to be confident that the Thunder can even manage one before the lowly Celtics rebuild. The Mavericks and Spurs eventually have to reach low points, but even after they fade in the years to come, there stand the electric Warriors and the Unibrow-fueled Pelicans, vengeful Harden’s Rockets and the upstart Blazers, the stalwart Grizzlies and the immensely talented Clippers. Can Durant and Westbrook overcome this loaded field? Can Brooks and his bosses keep their stars beyond their current contracts? Plenty of teams will be willing to spend everything to get their hands on one of them, and one has to wonder just how far the Thunder will go, given their history with the Harden situation.

It’s a rare occurrence to have two (or really three) compatible stars fall into your lap in today’s NBA. Usually that requires offseason spending and heavy recruiting… 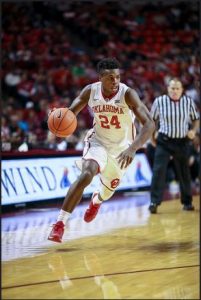