With the twilight two years of the Obama administration well under way and the president’s sixth State of the Union address now under his belt, it’s worth remembering that, of the men who have occupied the Oval Office, Barack Obama was always a bit of a political odd duck long before he became a lame one.

The president’s singularity doesn’t just spring from being the first black man elected to the job—with all the expectations, mandates, and racial baggage that freight that proposition—or from his status as one of the youngest presidents in U.S. history at the time of his 2009 inaugural. Nor does it arise from the seeming insuperability of the tasks before him, among them an economy in recession, two Middle Eastern wars, and hardnosed Republican opposition.

Instead, as his most recent SOTU demonstrates, the president whose days are numbered remains in deep tension with the realities of what it means, functionally, to be a Washington, D.C. politician in an age of partisan divide.

In a rhetorical crescendo that largely evaded pundits’ radar, Obama’s Tuesday address mounted a powerful critique of the obstructionist mechanisms at work in the nation’s political establishment. Leading with the tag “better politics,” the president laid out an unfulfilled vision of Congressional leaders who “better reflect America’s hopes” by “[breaking] out of…tired old patterns,” the Sisyphean tasks of endless “arguing…, constant fundraising, always looking over your shoulder at how the base will react to every decision.” Instead he urged Congress to “debate without demonizing” and to discuss “issues, and values, and principles, and facts.”

An evaluation of the peril of partisanship from the president for whom it has become a byword is, of course, hardly newsworthy. After all, past SOTUs have ardently expressed Obama’s commitment “to making Washington work better” (2014), championed bipartisanship and coveted more (2013), and asserted that both legislators and their electorates “want a smarter, more effective government” (2012).

But Tuesday’s remarks turned a corner. More candidly than ever before, the president ventured the thought that gridlock in Washington arises from more than just friction between a Democratic executive and an obstructionist GOP. Instead, he seemed to imply, Washington’s is a structural problem that demands a structural solution.

The value of the president’s comments parallels the problems they present. In a laudable first step, Obama’s rhetoric moved the discussion beyond the realm of policy. After all, if one accedes to David Frum’s assertion in The Atlantic that the president addressed himself on Tuesday at least in part to the future occupant of the White House, the implication that whoever succeeds him will face just as much Congressional road blockage merits recognition.

And the shadow of the future is just one way to acknowledge that Washington’s structural problems won’t follow Obama out the White House door. The fracturing and diminishing political base of the modern GOP, whose adherents are having as much trouble rallying around a viable 2016 presidential candidate as some of its elected representatives are having toeing the party line (see Ted Cruz), is another. Party lines, suggested a recent New Yorker review of Julian E. Zelizer’s The Fierce Urgency of Now, are another. Democrats, for their part, have done an abysmal job marketing their successes to voters. It’s telling that a president whose most recent SOTU trumpeted the successes of his economic policies was, barely three months before, reeling from a midterm shellacking that saw Republicans achieve majorities in both chambers of Congress. And Citizens United v. FEC, the 2010 Supreme Court ruling that paved the way for Super PACs (for which Obama has a documented distaste) and astronomical political contributions by private citizens will surely keep elected officials looking nervously over their shoulders for the foreseeable future.

Less helpful, however, was the president’s appeal to the problem itself, which wrongly prescribed an attitudinal solution to a structural issue. It’s a bit like arguing that the impoverished have only to work harder to stop being poor—libertarian, optimistic, and spiced with a healthy dose of blame, but simply not what the numbers support. Poverty is a structural issue, as is why Congress can’t get much done these days.

Unless a concerted effort is made to better understand and disrupt the structural issues that stand in the way of compromise, effective debate, and consensus-based solutions, the pressing social issues—two free years of community college, tax credits for education and child care, and tax hikes on the wealthy—that populated the other 58 minutes of Obama’s address are unlikely to find legislative relief.

Timing is also on the president’s side. He and his party are scot-free until 2016. For a lame duck facing an opposition Congress, remarking on partisanship’s underlying structures may be more flippant than brave. But whether he is able to do anything about it or not, the house of partisan structures that courts, Republicans, and the Obama presidency built still stands. This country may need another odd duck to begin the work of tearing it down. 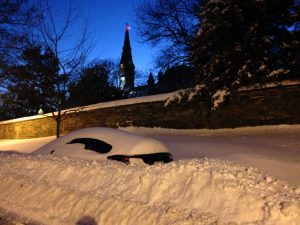 City on a Hill: House of Jokers