Death without Dignity: The Dangers of Assisted Suicide

Two weeks ago, the Voice published an editorial supporting a D.C. proposal to legalize physician-assisted suicide. Better known as “dying with dignity,” physician-assisted suicide has  been popularized by the media through their coverage of a photogenic young, white, class-privileged woman named Brittany Maynard. Mass media would have you believe that opponents are mostly anti-choice, right-wing, religious extremists callous to incredibly heart-wrenching stories like Maynard’s.

Yet as a disabled activist working within a framework of radical, intersectional social justice, I am deeply concerned about issues of choice, self-determination, and bodily autonomy. This is precisely why I am ardently opposed to the legalization of physician-assisted suicide.

Instead of promoting choice, legalization of physician-assisted suicide will limit choices. Legalizing physician-assisted suicide incentivizes medical insurers to restrict or outright deny coverage of more expensive life-saving treatment. If people with limited financial resources are denied other treatment options by their insurers, they can be functionally coerced into choosing assisted death. With greater focus on austerity and high medical costs incurred toward the end of life, the cheap option of assisted suicide ($100-$300) will unavoidably distort future treatment decisions.

Georgetown’s own Center for Clinical Bioethics published a study in 1998 that found a strong connection between pressure to cut costs and willingness to prescribe lethal drugs if legalized. The study warns that there must be “a sobering degree of caution in legalizing [assisted suicide] in a medical care environment that is characterized by increasing pressure on physicians to control the cost of care.”

The D.C. bill is closely based on Oregon legislation, which was drafted by a former health maintenance organization executive and passed in 1997. It is thus critical to examine the Oregon law and its implementation to understand the dangerous nature of the D.C. legislation.

Neither the Oregon law nor the D.C. bill provide any means of detecting violations of the safeguards. Oregon’s annual statistical reports repeatedly state, “we cannot determine whether assisted suicide is being practiced outside the framework of the law.” Oregon does not interview doctors who refused to provide the lethal drugs to patients who later received them from other physicians, even though the initial caregivers may have determined that they were ineligible. The law also does not require autopsies, leaving no way to confirm a terminal illness afterward.

Oregon’s research has failed to uncover numerous cases inconsistent with the stated purpose of the law that only came to public attention through media coverage. For example, Barbara Wagner’s insurance provider sent a letter denying coverage for her chemo prescription but offering to cover assisted suicide instead. The law further fails to prevent a caregiver or heir from suggesting assisted suicide, witnessing the consent form, obtaining the lethal drugs, and administering them.

Most importantly, no supposed safeguard can protect people from choosing to die based on a wrong prognosis. Doctors admit that it is impossible to predict with certainty when someone will die. In a letter published in The Boston Globe, Jeanette Hall described how she originally supported Oregon’s law. After receiving a terminal diagnosis, she requested the lethal drugs. Eleven years later, Hall is “so happy to be alive” and has publicly opposed further legalization.

Furthermore, people with terminal illnesses in all 50 states may receive palliative sedation, where they are sedated and pain relieved for a peaceful death. Patients everywhere also have the right to stop artificial nutrition and hydration. These currently legal solutions do not implicate the serious ethical and legal dilemmas that the prospect of legalizing assisted suicide does. While there are widespread, dangerous trends of patient neglect and prolonged suffering due to ineffective care and functional institutionalization, the solution is not assisted suicide, but improvements to the medical profession.

As a disabled person, I am concerned by the rampant ableism in physician-assisted suicide implementation. Many disabled people live with severe, chronic pain, multiple co-occurring physical, cognitive, and psychiatric conditions, and repeated and incorrect prognoses of early deaths. Our world is dominated by public discourse that considers disabled lives inherently defective, burdensome, suffering, and not worth living.

It is not hyperbolic to imagine that talk of legalizing assisted suicide for terminally ill patients could be expanded to include people who simply have lifelong disabilities. Many non-disabled people believe that it is better to be dead than disabled. Mass media and public opinion lauds a disabled person’s “brave,” “heroic,” or “inspirational” decision to commit suicide though most would rush to find suicide prevention services for non-disabled people. Current research further suggests that pain is rarely the actual reason that people choose assisted suicide. Instead, most people do so because they are afraid of becoming disabled and thus burdens on their families. This insidious form of ableism will have deadly consequences if assisted suicide is legalized.

No amount of safeguards are sufficient to prevent exploitation and abuse of vulnerable people with disabilities, as well as elders. Furthermore, in the presence of existing options for end-of-life care, it is disingenuous at best to suggest that those who have terminal illnesses have no other option. I am disturbed that many otherwise progressive people concerned with social justice have chosen to support a dangerous, discriminatory bill that in effect profits large corporations and unscrupulous relatives of sick and disabled people. There is no real justice or choice in assisted suicide. 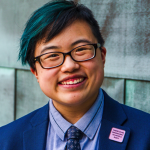 Lydia Brown
Lydia Brown is a queer and disabled activist and writer whose work focuses on violence against multiply-marginalized disabled people. Lydia is president and co-founder of the Washington Metro Disabled Students Collective and co-president of TASH New England, while also serving on the Board of Directors of the Autism Women’s Network and the Massachusetts Developmental Disabilities Council. Lydia works as a policy analyst at the Autistic Self Advocacy Network. Additionally, Lydia has served two terms as Undersecretary for Disability Affairs with the Georgetown University Students Association. Previously, Lydia was the 2012 Patricia Morrissey Disability Policy Fellow at the Institute for Educational Leadership. In 2013, Lydia was honored by the White House as a Champion of Change for disability rights. Most recently, Lydia received the Washington Peace Center's Empowering the Future Youth Activist Award for 2014. Lydia’s work has been published in Criptiques, Torture in Healthcare Settings, Tikkun, Black Girl Dangerous, hardboiled magazine, and The Washington Post.