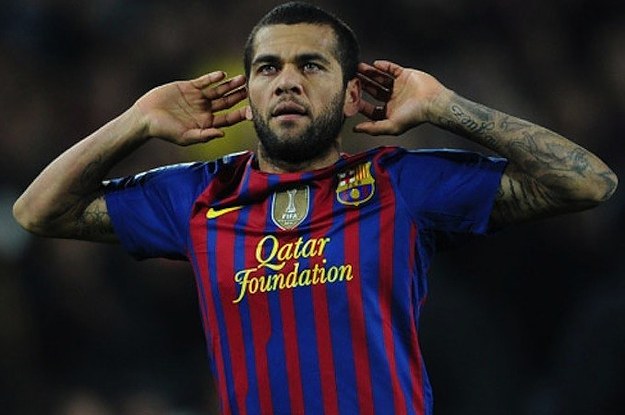 “We are all monkeys.”

This phrase was famously repeated among many football stars following an incident that occurred on April 27, 2014. It was a La Liga match between title contenders Barcelona and the resurging Villareal. Brazilian wingback and Barcelona star Dani Alves walked over to the corner flag to take a corner kick, when a Villareal fan threw a banana at the distinguished fullback.

Unfortunately, throwing bananas and making monkey noises are only two of the prominent racist gestures that have been used to target black football players by some fans within recent years during Spanish and Italian football league matches. Instead of reacting violently to the derogatory act from the opposition’s fan, Alves performed a brilliant act by strolling over to where the banana was dropped, casually peeling it off, and eating the treat before sending the corner kick into the box, as if nothing happened. Following that match, a worldwide campaign was popularized on social media networks. Started off by club and country teammate Neymar, football players began to upload photos of themselves with bananas under the hashtag #weareallmonkeys. In just one moment, Alves possibly had a bigger impact combating racism within football than UEFA or FIFA have ever done.

People all over the world hoped that this moment last year would become the turning point in history when racism would not be a repeated issue in football. Unfortunately, following a fairly successful World Cup under the lens of discrimination – in that there were no major hate crimes – the issue of racism has popped up once more. Before the recent Champions League clash between Chelsea and Paris Saint Germain on February 17, 2015, some Chelsea fans travelling from London created this incident when they were travelling to the Parc des Princes through the metro. The rowdy group of English fans repeatedly prevented a black man from entering the metro, shouting “We’re racist, we’re racist, and that’s the way we like it.” The black man ended up missing that train, and thanks to a bystander who filmed the incident, the world was outraged with the foolish acts of the Chelsea fans.

The fact that the issue of racism is being enlarged even outside the stadium is just as troubling as the behavior of wily fans during club games and matches. Fans like to target opposition players one way or another on the field during matches, and race becomes an easy target for them. Although racism should not be allowed at all, those cases can be understood to some extent; the fans are simply channeling the passion for their club and hatred towards the opponent in a wrong way. Having these fans shout racist remarks outside the footballing environment and towards people who have no reason to be targeted is a whole different issue.

The racism issue in European football comments on a larger image, an image that includes Europe as a whole: it reflects Europe’s struggle to transition into embracing multiculturalism. Contrary to the unified nuance between the name the European Union, counties from this continent – especially those in the East – have struggled to accept different cultures from outside the continent. In the past, this pattern has been observed with historic clashes with the Jewish and the Muslim faiths. As some of these anti-Semitic and anti-Muslim hate crime still persist to this day, it is difficult to claim that Europe is overly accepting of other cultures. The overly public racism in the world of football can be traced back to the entrenched racial attitudes that became taboo after World War II. These attitudes, which were never eradicated, were further strengthened with the drop of European power, the decolonization, and the wave of immigration from the Mediterranean. European society needed an enemy to blame their own situation.

Many football clubs are beginning to recognize this expression of racism and work towards taking this unwanted quest out of the pitch. For example, Real Madrid recently removed the traditional Christian cross from their official club crest in order to signal multiculturalism, although it did had a monetary motive financed from a lucrative sponsorship deal from the National Bank of Abu Dhabi. Stadiums willingly allocate advertising spots to display campaigns against racism in football – such as “Kick It Out” rather than taking in more advertising revenues, and clubs all over Europe have their players and captains display messages in the pregame schedule.

Change will be hard to find, especially as the racism issue lies in the entire continent that the sport is being played in rather in the sport itself. Football management is still dominated by Caucasians, with only 3% of those in professional coaching and management positions being of ethnic backgrounds. However, with efforts from the players like Alves’ and efforts from the clubs and football associations, we can only hope that football can be appreciated for its beauty and not for stealing headlines because of acts of racism and discrimination.

Good article on issue that makes us football fans around the world.