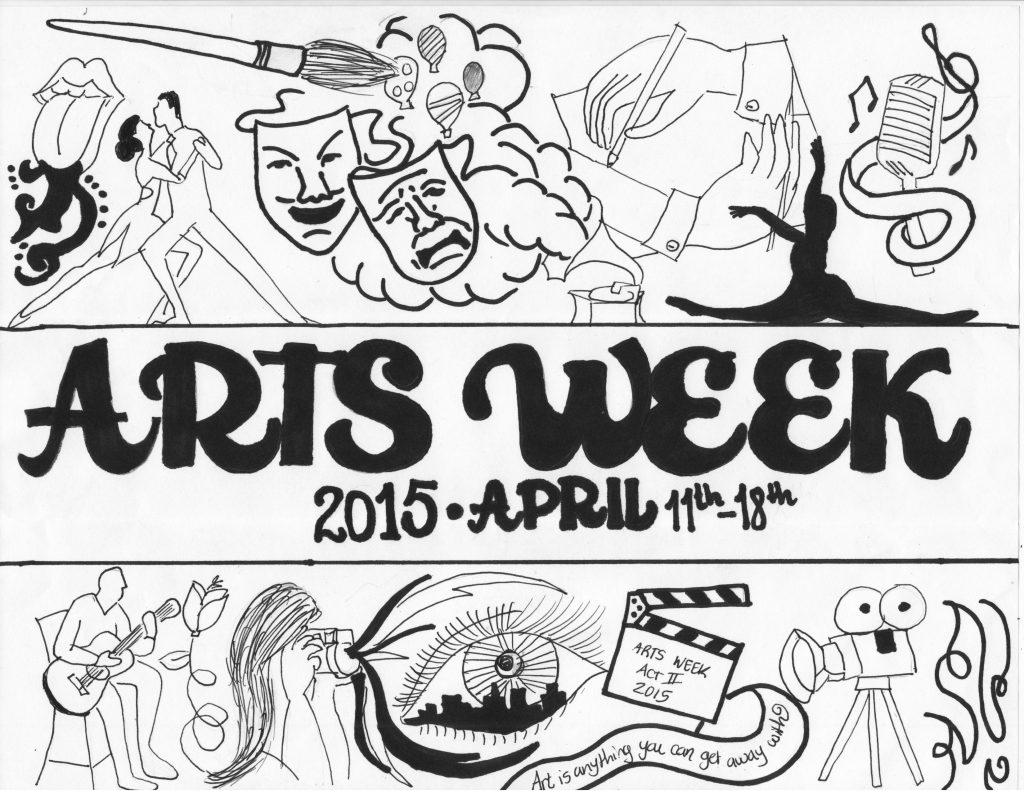 Starting this Saturday, the Georgetown University Student Association (GUSA) Subcommittee on Creative Expression plans to hold the second annual Arts Week to highlight and showcase the varied talents of the many on-campus art groups.

The newly formed committee created the week because they “saw a need to make more of a community around the arts,” according to Andrew Walker (SFS ‘16), co-president of the committee.

“While creative students on campus are excited about the art that they are making, Arts Week works to bridge the gap between disciplines, promote the work being done by artists on campus, and make students who wouldn’t necessarily identify as creative realize there is room for art in their lives,” he said.

Many of the events held during last year’s Arts Week will return, including Spring Sing, the annual a cappella concert held by the Saxatones and Superfood, plays from student theater groups, and daily Open Mic Nights at Uncommon Grounds. In addition, this year’s schedule involves more representation from the visual art, literary, and film communities through the inclusion of art installations, writing workshops and a film festival.

This article highlights some of these events and the many students creating them.

Have you ever wanted to be in a flash mob but never had the chance? Good news: Arts Week will host its first flashmob Friday, April 17 at 2 p.m. in Red Square. Starting next week, members of Georgetown dance groups will host workshops on various dance styles in the Healey Family Student Center dance studios.

All are encouraged to join, whether you have danced your whole life or only dance in your dorm when your roommate is showering. One of the coordinators of the flashmob, Katie Rosengarten (COL ‘17), says that Arts Week is special for the very fact that it’s inclusive to people who both identify as artistic and those who don’t.

“Arts Week aims to create an environment in which people of both colors can engage with the vibrant arts community on campus and hopefully come away with a better sense of their own artistic abilities and artistic identity.” And even if you decide not to dance, be on the lookout for Hoyas dancing to Beyoncé, Mambo Italiano, and more.

Killer Joe is most well known for its movie adaptation, which was released in 2011 and starred Matthew McConaughey. But Killer Joe was originally a play, which debuted in 1993 and was revived on Georgetown’s campus two weeks ago in a collaboration between the Mask and Bauble Dramatic Society and Nomadic Theatre. The play’s potentially triggering content prompted a talk-back session between the audience and the cast following the production.

“Because the play/movie has such strong and triggering themes, including sexual assault, the production had Sexual Assault Peer Educators facilitate a short talk-back after each performance in order to help the audience process what they had seen and make a safe space for the audience to share,” director Andrew Walker (SFS ‘16) wrote in an email to the Voice. “SAPE also communicated the many resources available to students before turning the talk back over to the producer, director, and actors to talk about the process and other themes in the show.”

The film adaptation of Killer Joe will be screened on campus next weekend as part of Arts Week, and will conclude with a similar talk-back session.

Next week, the Georgetown Program Board (GPB) is bringing the silver screen to the Hilltop, presenting Into the Woods and American Sniper in the Healey Family Student Center.

Into the Woods, Disney’s adaptation of a Stephen Sondheim musical that mixes many classic fairy tales together, has received critical acclaim since its release last December. The movie features many high-profile stars, most notably Meryl Streep, who earned an Oscar nomination in the category of Best Supporting Actress for her performance. The film also showcases performances from Anna Kendrick, Chris Pine, Emily Blunt, and Johnny Depp.

American Sniper generated widespread conversation for the portrayal of its subject material upon its release in January. Since then, it has earned praise as both a critical success (particularly for Clint Eastwood’s direction) and emerged as a studio moneymaker. The film, which stars Georgetown alumnus Bradley Cooper (C ‘97), was nominated for six Oscars, including Best Picture. Cooper earned a Best Actor nomination for his portrayal of Chris Kyle.

And if the free films aren’t enough, GPB will be providing free popcorn as well.

How does transitioning genders affect one’s family? How unconditional is the love we possess for those close to us? In Draw the Circle, playwright Mashuq Deen—along with director Chay Yew—takes on these weighty questions, exploring transgender issues through a multicultural lens. Although Deen alone mans the stage, the story takes the perspectives of those around him trying to make sense of life’s transitions. The performance marks the close of the Kennedy Institute of Ethics’s Undergraduate Bioethics Research Showcase and is co-sponsored by the LGBTQ Resource Center. Prior to the show, a reception will be held in the Riggs Library Blue Room, showcasing students’ work in various mediums.

Based out of Brooklyn, Deen is an advocate for LGBTQ rights and the inclusion of transgender individuals. He has had success in his young career across the northeast, earning accolades such as a Fellowship from the New York Film Academy.

From a foundation of compassion, Deen conjures a performance that evokes laughter and joy without sacrificing serious considerations. He allows their emotions and challenged assumptions to guide his work. Draw the Circle starts from a place of confusion and discomfort but seeks togetherness and understanding, for all of its figures and their evolving attitudes towards gender, sexuality, and love.

Some generations are easier to identify than others. Take the Baby Boomers, for example, or the so-called “Greatest Generation” that preceded them. But how do we define ourselves as members of Generation Y?

As part of a yearlong project entitled Myriad Voices, the Laboratory of Global Performance is presenting Generation (WH)Y, a performative culmination of dialogue and encounters between Georgetown students and youth living in Pakistan, Ireland, India, Egypt, Greece, and the United States. Generation (WH)Y was birthed out of encounter. The show marks the third installment in the four-part Myriad Voices series, enhanced by multimedia including video, audio, nontraditional lighting, projections, and poetry.

But what’s most fascinating about Generation (WH)Y it not the technology  it uses. It’s the quest for identity. Starting with merely an idea Georgetown students were able to create not only a performance, but, perhaps, a satisfying answer to the question of how we identify ourselves, uniquely, as a generation.