Transportation and getting around in D.C.

For reasons ranging from Georgetown’s small campus footprint to our prickly relationship with our rich and influential neighborhood residents, you can’t bring a car onto campus. So don’t go asking around for student parking permits. In fact, doing so would be a violation of the student code of conduct. 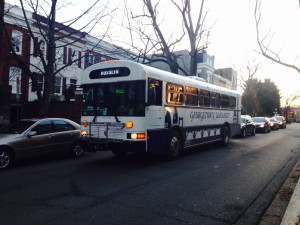 The university itself operates an army of GUTS (pronounced ‘guts,’ just so you know) buses, that run on five routes that take students to the Law Center, near Union Station and Capitol Hill, Dupont Circle, Rosslyn, Arlington, and Wisconsin Ave., making it useful to get to internships, places to hang out in the city, or to Safeway or Whole Foods, the nearby grocery stores. During rush hours, buses come as frequently as every 5 to 10 minutes. The Dupont Circle route operates until midnight.

Get on the metro

The Metrorail system is one of the fastest and most efficient ways to get around D.C. and the suburbs of Maryland and Virginia. Many museums, monuments, restaurants, and neighborhoods in D.C. are within walking distance. The Blue Line also takes you to nearby Ronald Reagan Washington National Airport. It is also generally safe, but be street smart and travel with a group, especially at night, when trains run much less frequently. Don’t forget to purchase a SmartTrip card at a station or at a CVS store before your first trip to save time and money while taking public transport in the city. Taking the metro is an experience in and of itself. You will be in awe at the giant concrete arches, dimly lit platforms, long escalators, and arbitrary delays that happen pretty much everyday because of some malfunctioning train.

For numerous reasons, the Georgetown neighborhood itself does not have a metro stop, but you can take the Dupont GUTS bus to access the Red Line and the Rosslyn GUTS bus to access the Blue, Orange, and Silver Lines. Rosslyn Station, located across the Key Bridge, is also within a reasonable walking distance from campus. Bear in mind that maintenance often delays rail service.

Numerous bus routes serve the Georgetown area and can bring you directly into the city. The G2, at the front gates, and the D2, on Reservoir Road, can bring you to Dupont Circle. The D6, which also stops at Reservoir Road, brings you to Dupont Circle, Chinatown, Metro Center, and Union Station. Nonetheless, they run less frequently than GUTS buses do, so be sure to check out the timetable online before waiting at the stop. At nearby Rosslyn, the 5A bus route can bring you to Washington Dulles International Airport at the unbeatable price of just $7.50.

You’ll also see red and yellow Circulator buses running across D.C. They provide frequent service around the National Mall, between Union Station and Georgetown, and between the Convention Center and the National Mall for the flat fare of $1.

Because D.C. is such a beautiful city, it’s hard to resist walking to places. Foggy Bottom, Theodore Roosevelt Island, the Lincoln Memorial, the Kennedy Center, and the Georgetown waterfront are all neighborhoods and attractions that are within a 30-minute radius from campus. For those without a bike, check out Capital Bikeshare, which allows residents and tourists with a membership to rent one of its over 3,700 bikes at 440 stations across D.C., Arlington, Montgomery County, and Alexandria. Users can pick up a bike at any station and return it to any other station. Daily, monthly, and annual memberships are available; the first 30 minutes of each trip are free and the service charges additionally for each additional 30 minutes.

Taxis are readily available across the District and, while expensive and sometimes frustrating, could be a useful, if not last resort, option if you’re stuck somewhere and a bus is nowhere in sight. By law, all taxis are required to accept credit card payments. Also consider downloading rideshare apps like Uber and Lyft, where you can request a car or taxi ride on demand with your smartphone, and look out for free ride promotions that these companies give out aggressively to young college students like you. Uber Pool and Lyft Line services can be more affordable than public transportation at certain times of day. However, be wary of surge pricing (Uber) and heat maps (Lyft), where your fare could be doubled or tripled because, apparently, everybody around you is requesting a car too only at times when you need it.

If you really, really, REALLY need to drive…

Georgetown University has contracts with Zipcar and car2go to provide carsharing services right on campus. If you’re over the age of 18 and have a driver’s license, then you’re eligible to become of member of either (or both) services.

Kudos to Minali for a previous version of this post. 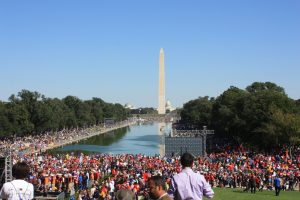 Off-campus restaurants you could use