Higher Edge: What Are We Paying For, Anyway? 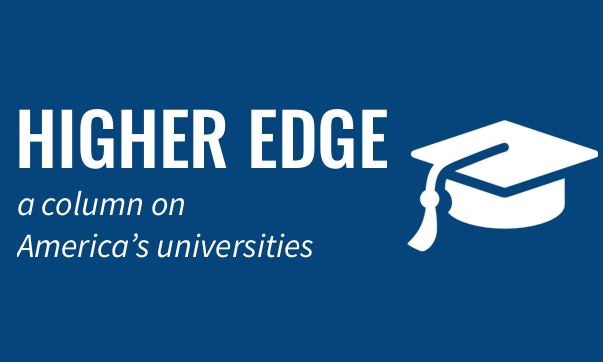 It’s the second week of school and everyone I know already seems to be consumed by work. Nine days of classes, and we’re burnt out and sleep deprived and wondering what we’re doing here, paying $59,625—money that we have not yet earned—each year in tuition.

Each year, without fail, our college tuition increases. Although the year to year difference in cost seems small, and perhaps negligible, to high income families, it’s impossible to overlook the the over 500 percent increase in college tuitions nationwide since 1985. Despite the burgeoning cost of higher education, each year even more high school students across socioeconomic classes are choosing to attend universities in order to earn a degree.

The pressure to attend college and preferably private elite institutions, especially among middle and upper class students, seems to be so ubiquitous that few people stop to question exactly what they’re paying for.

The first and easiest argument to make for attending a college is to get a job, and not only a job, but higher paying and more prestigious ones. After all, according to Business News Daily, an increasing number of employers are only hiring candidates who have earned a bachelor’s degree. A recent report of all secretarial and assistant job postings finds that 65 percent of listings require a B.A., whereas only 19 percent of the people who already hold those positions have one. Furthermore, according to the Bureau of Labor Statistics, college graduates make $400 more per week than non-graduates and have a significantly lower level of unemployment.

Although these studies seem to construct a compelling case for attending college, there has to be more to the story. Universities dedicate an exorbitant amount of resources to curating a faculty full of experts and leaders of research in their specialized, respective fields of study. Georgetown University, for instance, spent $611,840,000 on faculty salaries in 2014, which exceeded the $524,840,000 it took in from student tuition. According to DCist, tenured professors at Georgetown make an average of $167,100 a year. If the main goal of these faculty members is to provide career training, then the current system seems ineffective, at best. Universities could just as easily higher candidates who dedicate their lives to teaching and have master’s degrees in their fields. Our professors are overqualified and overpaid just to be teaching students the skills needed for specific jobs.

Therefore, the purpose of selecting such a prestigious staff ought to be to provide students with a better rounded and more meaningful education . If you choose to attend a university such as Georgetown, then you should agree. Georgetown sells its students the promise of a Jesuit education, which fosters inquiry, self discovery through reflection, and a deeper understanding of the community at large. The notion of “educating the whole person” sets Georgetown apart from other top colleges during the admissions process because it emphasizes an education that integrates faith and service with learning. If carried out correctly, this should translate into an environment where the development of the individual is as much a productive goal as exam scores and grades. It should make us into understanding and compassionate human beings instead of people who just work enough to get by.

In practice, however, while an education at Georgetown or any university is certainly meaningful, there are many times when it falls short. For instance, I took a class a few semesters ago in which I barely understood the material. I nodded along in lectures, pushed myself through homework (in which you could answer each question again and again until you got it right), asked questions without receiving satisfying answers, and received a 57 percent on my midterm. I received an A- in the class, though, because all of my fellow classmates were in the same situation, and a department-wide curve masked the fact that none of us were learning.

This is just one example of the many institutional barriers that stand in the way of learning. Curves reward students who can edge out their peers on tests. Professors assign more reading than students can realistically finish and reward students who are able to fake their way through class discussions. Although individual thought is always encouraged, it is never required. Students can excel at Georgetown simply by mindlessly taking notes in lecture and half-heartedly contributing to discussion sections.

Essentially what it comes down to is goal-oriented education. Students use college as a means to get a job, and if they view it as more than that, then they are still just learning to take a test or finish an assignment.

Whereas I would usually call upon the university or administration to make some form of policy change at this point in my column, instead I am calling on the student. We choose the level of education we receive when we attend a university like Georgetown. Unlike universities almost anywhere else in the world, most American universities allow students to curate their own paths of learning.

Attending a university costs several fold as much as it should, but until our government decides to revolutionize the way college is funded, we have to learn to work within the system. The answer to the question, “What are we paying for, anyway?” is that you have to decide for yourself.

You have an opportunity before you that only few others in the world have access to, and if you’re not a male and/or you’re not white and/or you’re not from the highest socioeconomic class, then that number is even smaller. Let yourself be curious, even when it’s not rewarded. Challenge yourself beyond what is expected of you. And if you don’t like the courses you’re taking, change them. I don’t mean to oversimplify, but I also don’t want us, as students, to overlook our own agency. We ultimately choose what we carry away from our experiences.

As I continue writing Higher Edge, I will call out grievances with bureaucracy and educational policy and institutionalized learning, but I wanted to start this year off with a reminder that even if the cost is high and we feel crippled under the burden of our studies, we are still standing in a place of privilege.