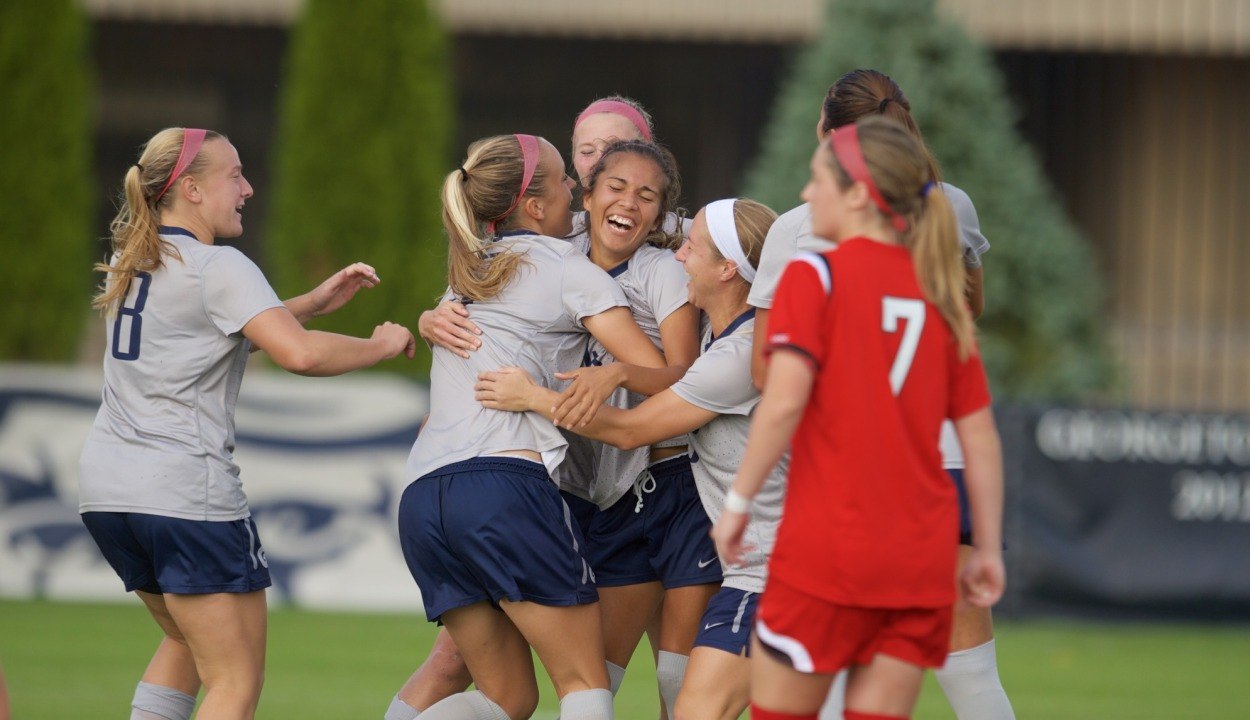 The Georgetown women’s soccer team (8-4-0, 3-0-0 Big East) handed St. John’s (11-2-0, 3-1-0 Big East) its first Big East loss Thursday afternoon. “Score early and score often” seemed to be the plan for the Hoyas, who netted their first goal 40 seconds into the match. Sophomore midfielder Chloe Knott scored on a header off of a corner kick, setting the tone and pace for the rest of the game.

“It’s huge when you can get a goal like that. It just gives you momentum,” said Georgetown Head Coach Dave Nolan of the goal. “It gave our kids confidence, and for the next 25 minutes I thought we really pounded them in.”

The Hoyas used this momentum in the first half, outshooting the Red Storm 7-4 in the first 45 minutes. Their lead could not last all the way to halftime, however. Saint Johns’ star senior forward Rachel Daly scored on a penalty kick in the 30th minute. Daly leads the Big East with 12 goals, and also plays for England’s U-23 National Team. The Hoyas had been planning their defense against her all week and they certainly stepped up. Aside from her penalty shot, she Daly not seem as dominant against the Hoya defense as she has been against other teams.

The Hoyas made sure their play in the first half continued on in the game, when sophomore defender Taylor Pak scored a header off of a corner kick in the 49th minute. From this point on, the game belonged to Georgetown.

“We didn’t make any mistakes in the second half. We played a flawless second half defensively,” said coach Nolan.

Capitalizing on the Red Storm’s mistakes was key for the Hoyas in this game; they gained possession for Pak’s goal off of a handball by the Red Storm. A crucial turnover at around midfield led to the Hoyas’ third goal: an 18-yard shot off a breakaway in the 76th minute by freshman forward Caitlin Farrell, her first goal of the year.

Red hot sophomore midfielder Rachel Corboz had another outstanding game, notching her team high 5th and 6th assists Thursday. She is also second on the team with 5 goals.

“Rachel’s our midfield general. One of the things I asked her to do this year was to get a little bit better and more consistent on her delivery on set pieces,” said Nolan. “You can see we scored on two of them today.”

With all the remaining regular season games for the Hoyas being against Big East opponents, the team hopes that they can carry over the momentum from the win into future games. With games against many strong opponents like No. 23 Depaul (9-2-2, 3-0 Big East) still left to be played, the Hoyas will need everything they can get.

“I think it sets us up well for the rest of the season,” said Knott. “For us to win confidently, I think it means a lot. It was like our hard work paying off.”

“To this point, [St. John’s] has been the best team in the Big East,” said Nolan. “We knew that if want to have a resume for the NCAA committee to review, we needed some wins against some highly ranked RPI teams and Saint John’s was one of them.

However, the Hoyas coach was quick to point out that there was still a lot to be done for the team.

“It sets us up nicely, as long as we take care of business in the rest of our games,” he stated.

The Hoyas are now on a four-game winning streak and are undefeated in the Big East, something they will look to continue Sunday at Butler (9-5-1, 2-2 Big East) in Indianapolis.