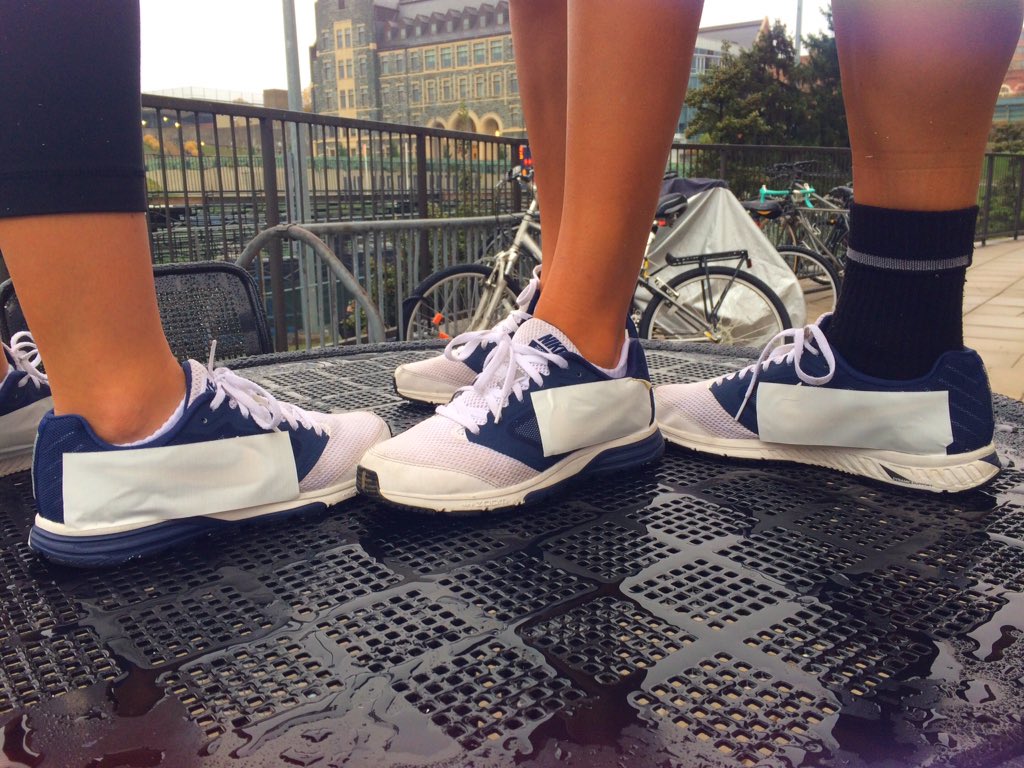 A group of unidentified Georgetown student-athletes have taped over the Nike logo on parts of their university-provided equipment in response to an event led by activist Jim Keady that explored Nike’s labor practices.

A tweet from Keady shows a picture of three student-athletes with tape covering the Nike logo on their shoes. Keady, who spoke at Georgetown on Nov. 9, called into question the relationship that Georgetown and other Jesuit institutions have with Nike.

“It’s exciting that students are taking up the call,” Keady said regarding the photo in an interview with the Voice. “Students have a lot to lose in taking a stand like this.”

In Keady’s discussion with students on Nov. 9, he claimed that Nike employees in sweatshops make only $1.25 per day. Keady described working and living conditions in these factories as cramped and dirty. He also noted physical, verbal, and and sexual abuses that some workers, especially female, endure as well as low health and safety standards being met in the factories.

“There are student athletes here at Georgetown, and every time they go out onto the field or the court they are wearing the Nike swoosh or Jumpman logo that was launched here at Georgetown with St. John’s and one other school,” Keady said at the event. “Georgetown was used, and the administration and elected parties used the student athletes and continue to do so. They have turned [student athletes] into walking billboards for a company that violates everything this Catholic Jesuit institution stands for.”

According to the Code of Conduct For Georgetown University Licensees, a document that outlines the standards to which Georgetown expects companies that produce its licensed goods meet, employees of these companies have the right to earn a living wage.

Callahan Watson, chair of the Georgetown’s Licensing Oversight Committee (LOC), noted Georgetown’s commitment to supporting workers’ rights in companies that have license to use the university’s name or logo.

“We require these companies to act in a socially responsible manner and abide by the Code of Conduct for Georgetown University Licensees as a condition of their licensing contracts with the University,” Watson wrote in an email to the Voice. “The Code sets standards regarding working conditions and the rights of workers involved in the production of licensed goods.”

This story will be updated as more information becomes available.

Is there any evidence that these are actually the feet of Georgetown student-athletes? Right now it looks like one loudmouth (not that he doesn’t have a point about The Swoosh). Have any actual Hoyas spoken out about this being a concern?

Who is being “kicked off teams”?