Higher Edge: The Role of Campus Media in Student Protests 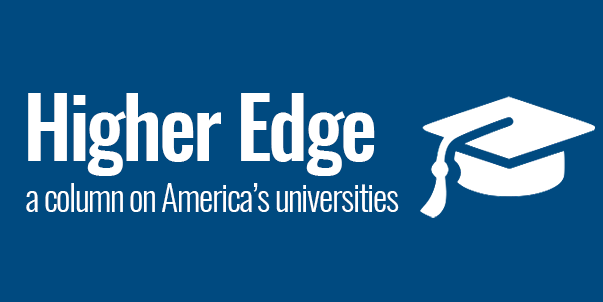 The confrontation between student photojournalist Tim Tai and protesters at the University of Missouri has ignited a debate concerning the stifling  of free speech on college campuses, re-raised questions concerning the coddling of American  students, and shed light on the apparent contradiction of weaponizing safe spaces. A video of the incident surfaced on Tuesday, revealing the protestors forming a human barrier as Tai refused to abdicate his right to be present as a photographer at the event, “the same First Amendment that protects you standing here,” he said to the protesters pushing him back. Despite one student’s assertion that Tai could be arrested, Tai was acting well within his legal rights.

However, this isn’t just about free speech, and it would be reductive to leave it at that. As students and student journalists, we have the imperative here to think not only about free speech, but also about its history in the context of racism and oppressive narratives. Our challenge is not to push the legal boundaries of our rights, but rather to understand where and how to draw our own ethical lines. In order to do so, we first have to consider the context surrounding the requests of the protest group, Concerned Student 1950.

The students protesting were calling for action from University of Missouri President Tim Wolfe in light of recent instances of racist and anti-semitic acts on campus. Black students have continuously been racially harassed not only on Missouri’s campus, but also on campuses across the nation where there have been nooses hanged and blackface parties. In light of these repeated instances of harassment, it makes sense that Concerned Student 1950 called for a safe space. The group tweeted, “We ask for no media in the parameters (sic) so the place where people live, fellowship, and sleep can be protected from twisted insincere narratives.”

No matter how high our own standards of journalistic integrity may be, Washington Post reporter Terrell Jermaine Starr sheds light on the historical insensitivity and inadequacy in media coverage of issues of racism. In the wake of Michael Brown’s murder, Fox News drew attention only to the “moral decay” of the black community, stories headlined with picture of Brown using gang signs, and ultimately, for conservative sources, the bias of liberal media. Police brutality and black pain were undermined in an argument of who was providing better coverage. Baltimore coverage featured pictures of the “heartbreaking aftermath” of the riots rather than the heartbreak of black communities who needed it. According to Starr, African Americans are only rarely featured on the news unless they have committed a crime.

This does not mean, however, that student journalists have no place at protests. It does not mean we should shy away from coverage. When protesters at Missouri shouted that reporters had to go, Tim Tai firmly said, “I have a job to do.” The job, though, is not just fulfilling an assignment from an editor. It is not publishing the perfect picture. It is doing what it takes to capture an honest narrative because no matter how dismissive anyone is of journalism, it has a power. Think about Seymour Hersh’s exposure of the My Lai Massacre, Bob Woodward’s watergate investigation, or the photographers who navigated the base of the Twin Towers right after the attacks. My point is that journalism is powerful insofar as it exposes injustices and preserves history. And, when we look back at it, we want to make sure that all voices are being represented.

At Georgetown, members of our community demonstrated in solidarity with students of color everywhere. In order to protect the safe space, leaders asked that no one to speak to media so the narrative would not be misconstrued. I’m still grappling with what to make of this. Of course no one has to speak. We have the right to speech and the right to silence, but the problem is that the story gets written anyway and the voice of the marginalized community becomes “X declined to comment.”

Our job as reporters, though, has always been to represent all voices on campus. If we want these students who feel oppressed to trust our judgment in crafting an inclusive and non-oppressive narrative, then the call is for higher standards of ethical journalism. I will not deny Tim Tai’s right to stand in a public space, but I will ask what he would have lost to have taken a step back, respected the space, and taken the shot. Our duty to preserve and to capture does not excuse insensitivity. Our right to free speech does not mean we should make our own voices louder than the truth, but we also cannot let ourselves be silenced either.

Higher Edge: The truth about rankings