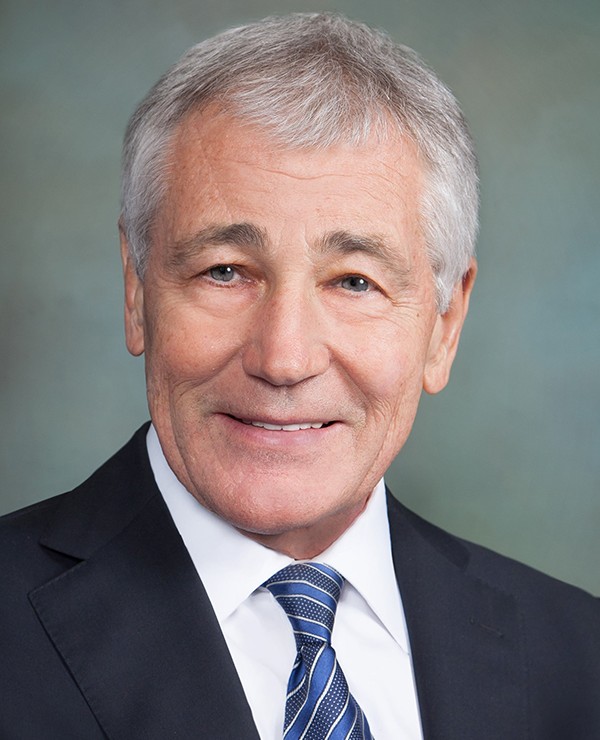 On March 21, Chuck Hagel, former United States Secretary of Defense and current distinguished executive in residence at Georgetown University, spoke with Professor Daniel Byman about security issues the United States and the world will face in the future.

The conversation was part of the University’s Global Futures Initiative, an effort on the part of various programs and departments to adapt the University’s mission and identity to increased global engagement, including dialogues with prominent figures in fields including health, governance, the environment and in this case, security. Byman teaches in the Security Studies Program in the School of Foreign Service and the Department of Government in the College.

Hagel emphasized the risk of cyberattacks against the United States. “I think cyber warfare represents the most ingenious, insidious, real, and growing threat to our security as any one threat,” he said.

“The reason cyber represents a new kind of threat is because it is quiet, it is so deadly in that you don’t know for a while where it actually came from,” Ha gel said. He added that another reason cyberattacks pose such a threat is that they can be highly effective even when used on targets that are not thought of as military assets, citing the example of a power grid.

Hagel suggested that an obstacle to effective cybersecurity is the diffusion of authority and resources throughout various federal agencies without strong communication among themselves, as well as a lack of cooperation between the government and the private sector to improve the cybersecurity resources of the latter. “We’ve got to pass new cyber legislation that builds the bridges to be able to [coordinate cybersecurity] better inside our own government, and also allow our governments assets… to be used far more capably in helping the private sector within the boundaries of privacy,” he said.

The declining power of international institutions, such as the European Union, the United Nations, and NATO, and the world order these institutions upheld, is also a threat to global security, added Hagel. “Any measurement you want to apply to this world of alliances and relationships and partnerships that’s lasted for over 70 years, essentially a world order is now shifting, [which] I think is one of the great threats.”

Byman later guided the conversation towards the questions of the United States’ intervention in the world. Hagel acknowledged the complexity of the decision. “I have always taken the approach that I don’t think there’s any absolute, fast rule about military intervention. I think you’ve got to always assess it based on history, frames of reference, allies, your interests, what can you do, being what is most likely the outcome,” he said.

Hagel was generally cautious regarding intervention, adding that before deciding to intervene, the United States must ask itself hard questions about its goals and logistics. “This question has to be asked: is it in America’s interest?” said Hagel, “The last question should be, this is what Colin Powell used to talk about, do you have an exit strategy?”

Hagel took questions from the crowd later in the conversation. Asked about the likelihood of future conflict between the United States and China, he was optimistic about the possibility of peace. “We cannot afford to undo each other, and it’s not in either one of our interests,” he said.

The conversation continued with a question from the crowd about conflict in the Middle East and possible solutions which the United States could contribute to. Hagel ascribed the unrest in the Middle East to a number of causes including political dysfunction, economic problems, the legacy of colonialism and ethno-religious sectarianism.

In his final remarks, Hagel again emphasized the need for restraint in the United States’ foreign policy, in particular towards promoting peace in the Middle East. “We’ve got to work with the leaders, the countries, the people of the region, because ultimately they’re going to have to sort it out,” he said.