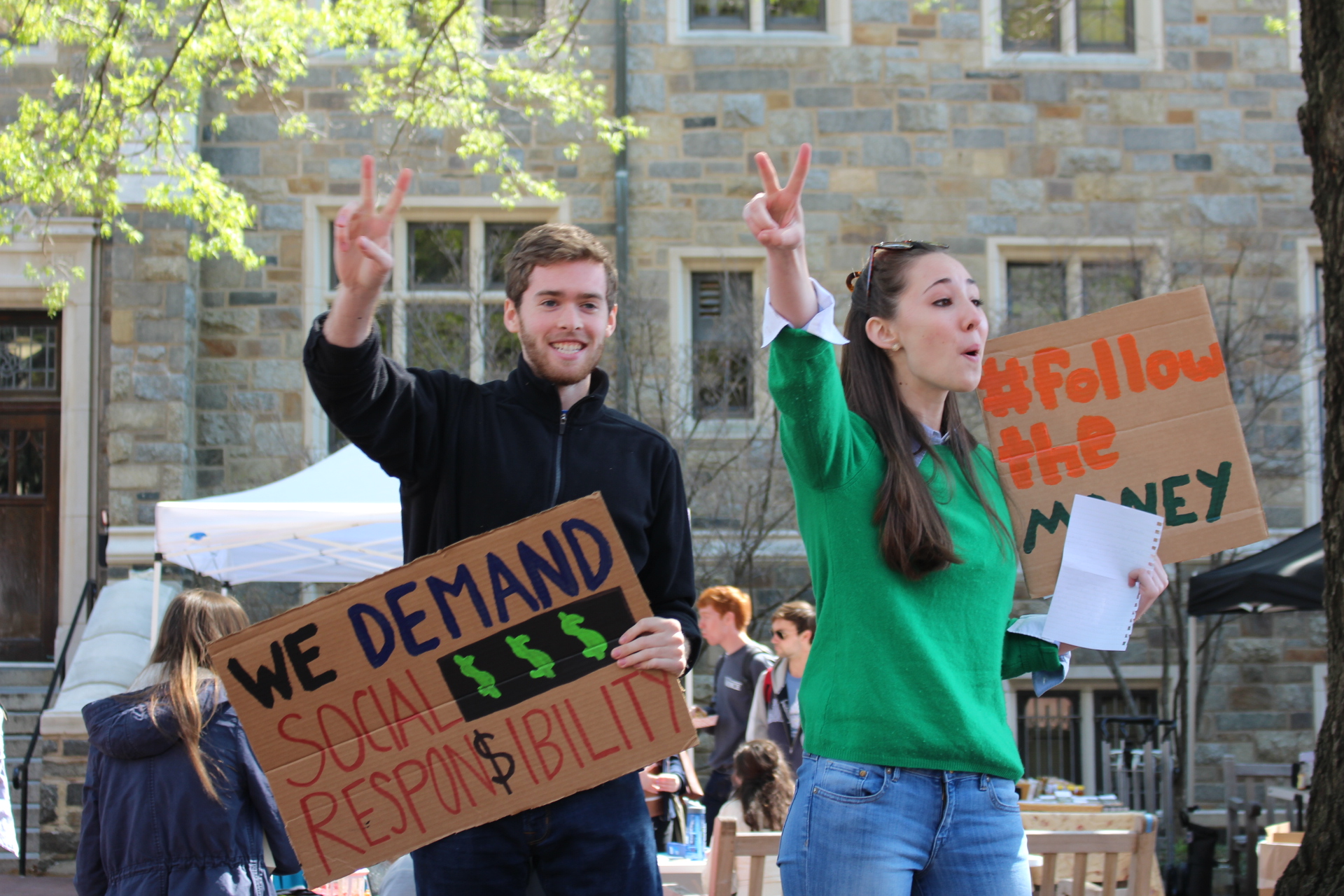 Georgetown University Fossil Free held a rally on April 13 in Red Square with members from allied student groups groups to demand transparency and social responsibility in University investments. GU Fossil Free members spoke about Georgetown’s need for a socially responsible investment policy before leading a chanting group of students to President DeGioia’s office where they delivered their list of demands to the President’s Chief of Staff, Joseph Ferrara. GU Fossil Free is an unrecognized student group campaigning for the University to divest from fossil fuels. 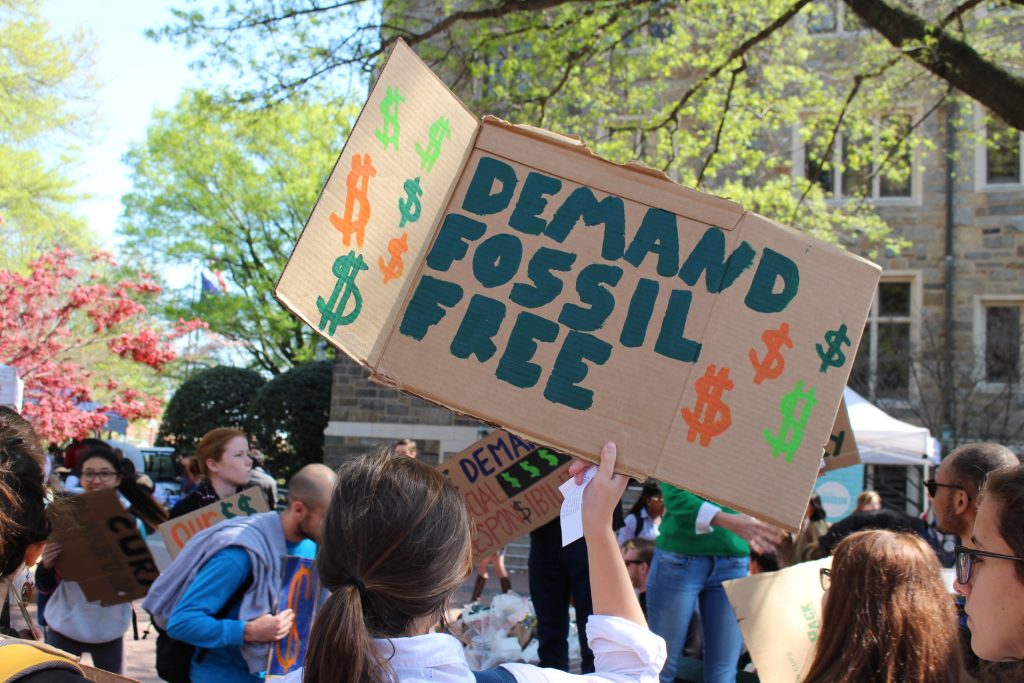 About 30 students gathered in Red Square during the Farmer’s Market, as members of GU Fossil Free explained the need for moral guidelines on University investment and read their demands. Attendees emphasized that this was an action-based, not issue-based rally. “The point of Follow the Money is not to dictate what the University should put in its investment policy. It is to say that the University should have one, period–and that students should be engaged in the process of its creation and implementation,” wrote GU Fossil free on the rally’s Facebook event page.

Georgetown’s Committee on Investments and Socially Responsibility (CISR), a committee that includes students and Fossil Free members, does not have access to information on the University’s investments. According to the website of Georgetown’s Office of Public Affairs, CISR acts as an advisory body to the Board of Directors and does not have oversight over endowment investments. “The CISR does not have authority to review, veto, or recommend specific endowment investments, or to address the day-to-day operations of the university,” the website reads.

“Georgetown does not utilize students in its decision making processes,” said Montgomery, “We demand student engagement.” 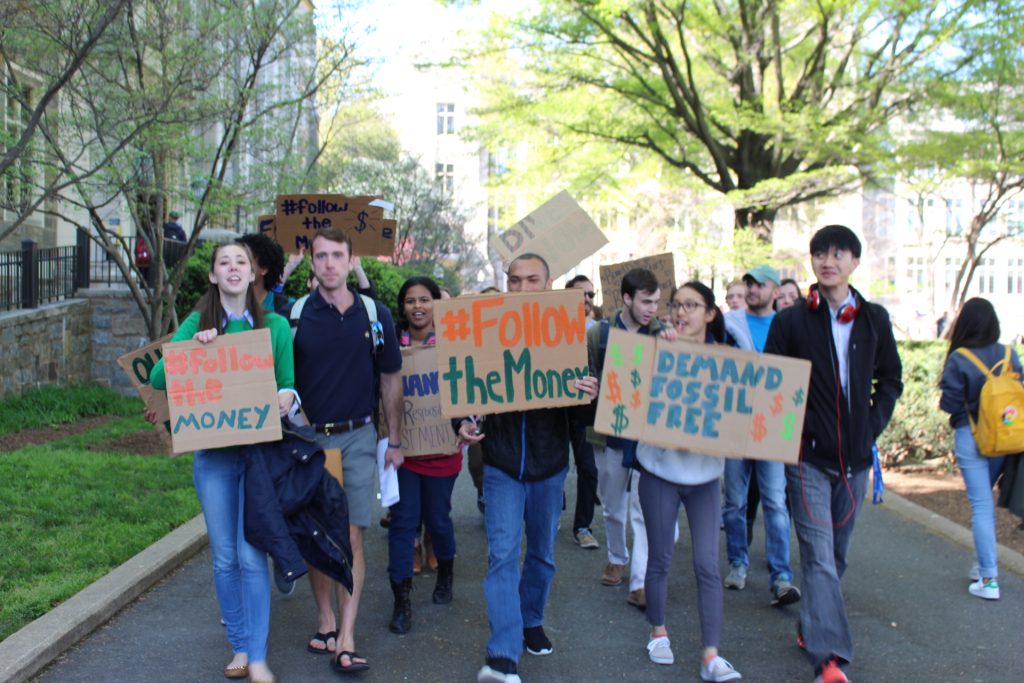 Other GU Fossil Free members cited Brown University’s adoption of such policies and Georgetown’s Jesuit values as additional reasons for implementing a socially driven approach to investments. GU Fossil Free and their partner student groups are demanding the creation and development of a University-wide socially responsible investment (SRI policy), a permanent and institutionalized Board of Director’s SRI Working Group, changes to the structure of CISR, and an online investments transparency page, according to the list of demands on GU Fossil Free’s website.

“Georgetown students are known for being advocates for social justice and it was really important to me to have that same advocacy from Georgetown, “ said GU Fossil Free member Samantha Panchevre (SFS ‘19). “Our investments, our endowment depict who we are as a university, and for the students, we are not injustice.”

Daniel Silbert (COL ‘18), President of the Georgetown Israel Alliance (GIA), said that the GIA supports Follow the Money because of their concerns about the University’s ties with Qatar. “Qatar is the global financial center for terrorism and violent extremism in the Middle East,” said Silbert, “So we just want transparency that none of our money and no Georgetown money is going to any company that directly or indirectly supports terrorism in the Middle East or extremist groups that perform acts of violence against Israel.” 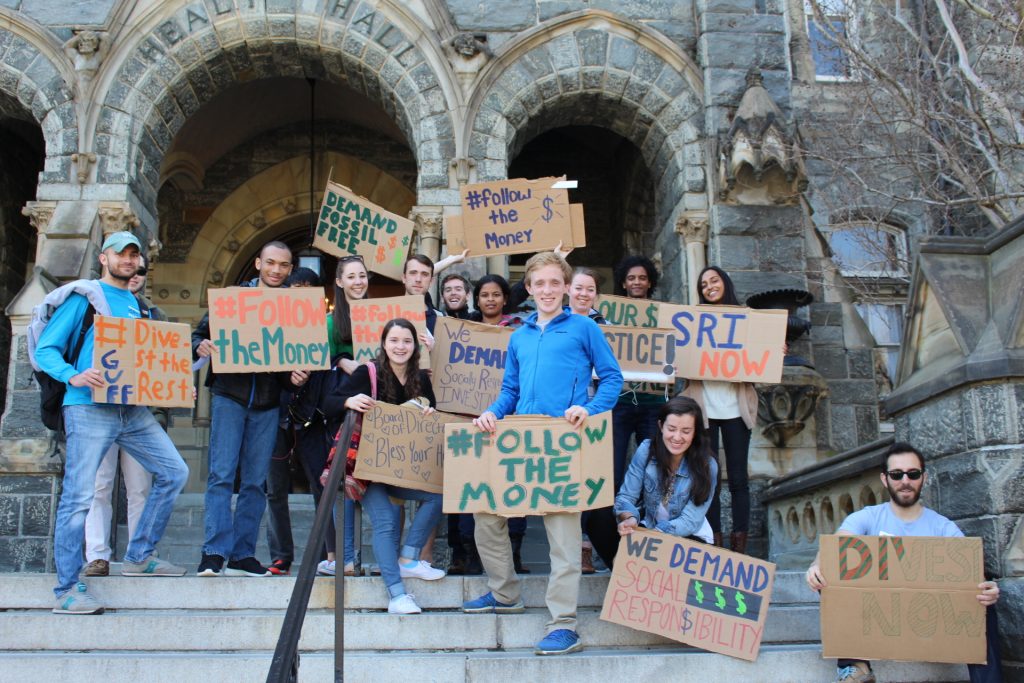 Georgetown Students for Justice in Palestine (SJP) was another co-sponsor for the event. “I think it’s a great thing that even though our clubs are so different and have very opposing viewpoints, we’re able to find one thing that we have in common and work together on, which is supporting transparency,“ Silbert said. 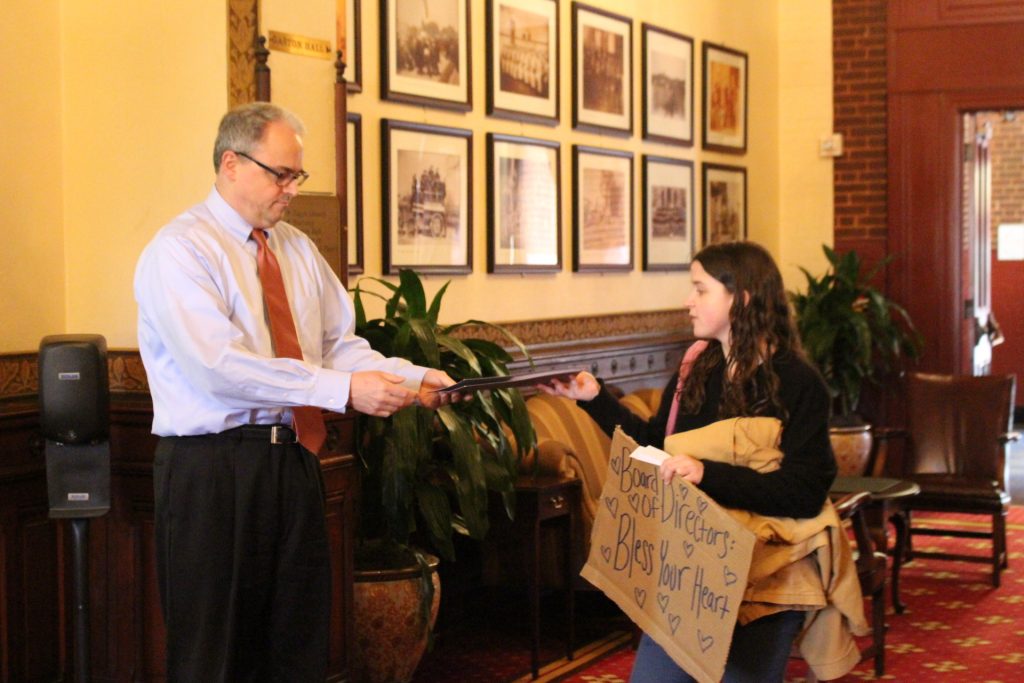 An error with regards to the group’s afternoon meeting has been corrected. The meeting was with Joseph Ferrara and Erik Smulson, not with President DeGioia. 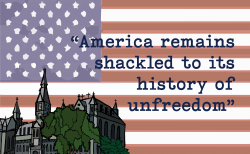