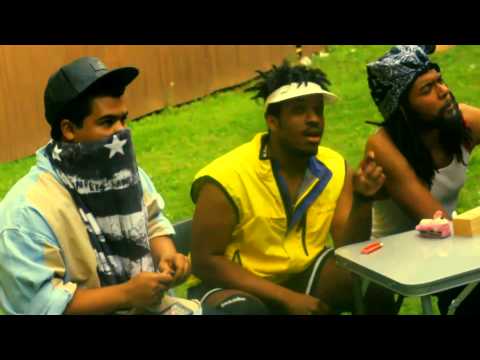 I must admit, when I first agreed to see Father at the U Street Music Hall, I didn’t quite know what I was getting myself into. Due to a slight failure to communicate on my part, until about 10 minutes before the show I thought I would be seeing indie singer-songwriter Father John Misty. Nonetheless, the rapper gave an impressive performance to the 150 or so fans that crowded into the bare-bones hall, a venue with a warehouse feel meant to put as much attention to the performers as possible.

Father is the founder of Awful Records, a collection of artists that make music almost specifically designed for Soundcloud and trendy Tumblr blogs. Three members of the label, Lord Narf, KCSB, and Lui Diamonds, each performed opening sets. While Lui’s set itself was somewhat underwhelming, he would later perform a verse alongside Father that was one of the most memorable of the night.

Lord Narf, the final set before Father, delivered the most exciting of the opening acts. She performed her most notable singles and, unlike the first two acts who struggled to keep the crowd engaged, enjoyed an excited crowd that was more than willing to sing along with the namesake chorus of her single “Leave Yo Azz Alone”. By the time her set was done, the crowd, an amalgamation of alternative hip-hop fans all of whom looked like they frequented the pages of The Fader or Complex, was more than ready for the main act.

When Father took the stage, dressed in a white t shirt adorned with the three headed dog Cerberus and thick rimmed glasses, he immediately set the vibe with his “Back in the ‘A’ Freestyle/ on Me”. To the delight of the fans, the rapper played the majority of his hits and many songs off of his newest release, I’m a Piece of Sh-t. The catchy, repetitive choruses he employs in “Look at Wrist”, “Everyone in the Club Gettin Shot”, and “Nokia” transformed the crowd into an army of head-bobbing fans adorned in overalls, double buns, and ironic t shirts.

Perhaps the most enjoyable part of the performance was the way in which Father and the other Awful members engaged with the audience. Richposlim, a rapper and producer in the label, jumped into the mob in front of the stage twice. He and the other performers clearly fed off the energy of the fans.

The passion from the crowd was so potent that no one really questioned it when Lui Diamonds pointed out that “DC was the best spot on the tour so far.” Even after the set was over, when Father heeded to the fans’ request of “one more song,” he and his tour members did not quite want the night to end, joining the fans in a sing-a-long to 2 Chainz’s “Watch Out.” Thursday night’s performance cemented the idea that Father’s brand of weird trap music just might have a place outside of the Dirty South.