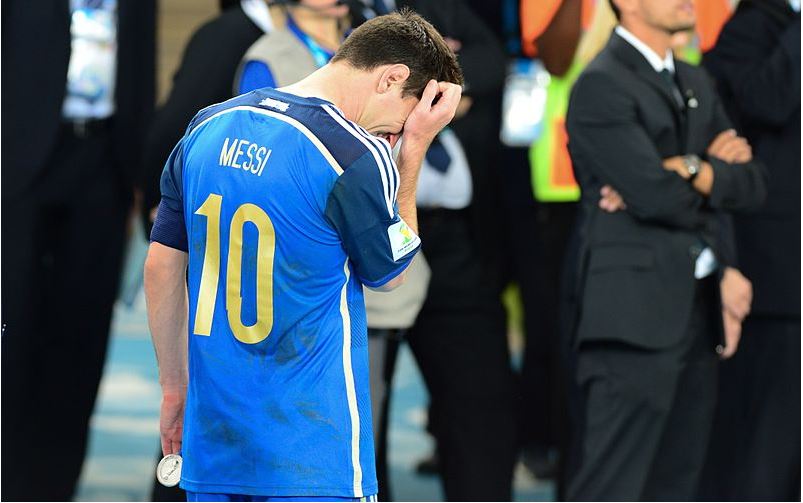 An Emotional Messi After the 2014 World Cup Final By Agência Brasil ([1]) [CC BY 3.0 br (http://creativecommons.org/licenses/by/3.0/br/deed.en)], via Wikimedia Commons

Lionel Messi is, if nothing else, memorable. His Barcelona debut was marked with a well taken goal and his club career since has been nothing short of remarkable. His first hat trick was at the Santiago Bernabeu against rival Real Madrid. His Champions League header against Manchester United was part of the first full soccer game that I ever watched. His two solo wonder goals in Champions League semifinals, in 2011 against Real Madrid and 2015 against Bayern Munich, are two of the most superb goals of the century, and one of the few that can top them is his solo goal from early in his career against Getafe. He broke Gerd Müller’s record for goals in a calendar year, helped along by his five goal game against Bayer Leverkusen. His goal against Athletic Bilbao in last year’s Copa del Rey final is everything that Messi represents as a player: close control, ingenuity, and a little bit of magic. Echoes of BeinSports’ Ray Hudson’s screams of delight and superlatives from when the “little Argentina man,” the “magician in football boots” scored another goal or played another pass through five defenders is what we’ve come to expect from the best player in the world, maybe even the best ever. But even he can’t make everyone happy. Argentina expects Messi, as the head of the current golden generation, to lead them to a senior title, and even then, there was a time that Messi wasn’t the leader at all.

Lionel Messi’s Argentina tenure began with the only red card in his illustrious career. Maybe it was an omen, because for a long time, Messi struggled. He was growing a reputation of being unable to produce his club form for his country, and after a disappointing World Cup in South Africa, which ended without a goal and a quarterfinal exit, there were doubts as to whether Messi would ever perform for his country. Without the London Olympics, it’s possible that he never would have. A pre-Olympic friendly against Brazil was Messi’s arrival on the international stage. His hat trick in that match was the turning point in his international career, when he made the national team his team. He captained the team in Brazil, scoring four goals and just narrowly missing out on the title in extra time against Germany, although Gonzalo Higuain missed the biggest chance in the match. 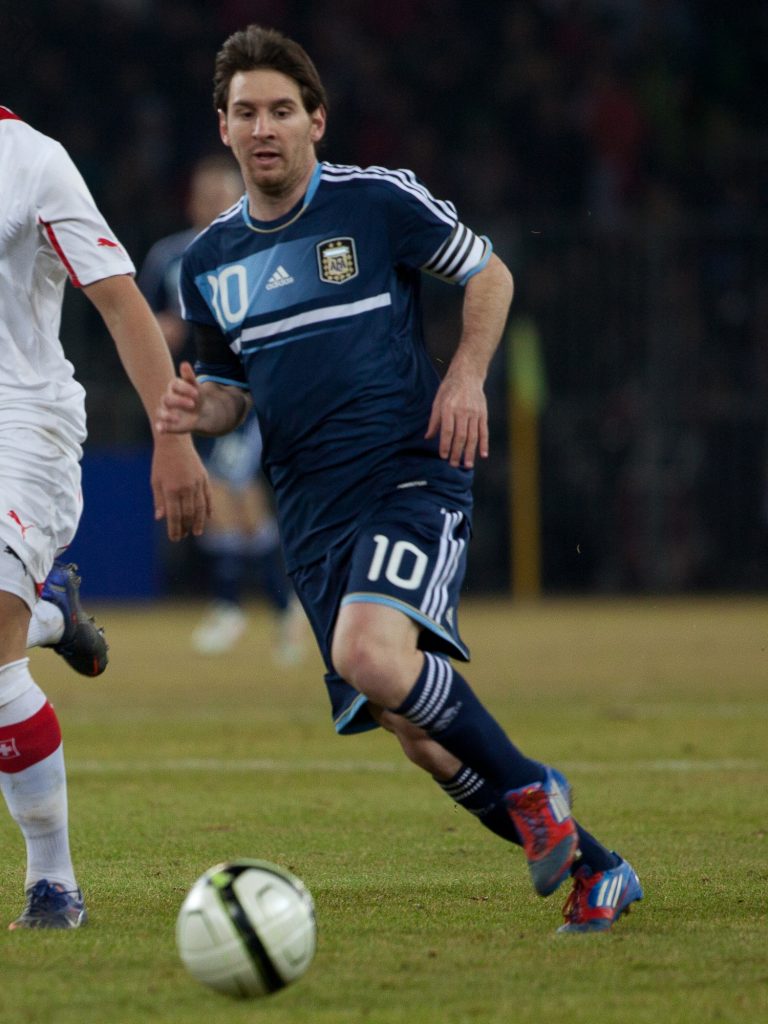 The next summer in Chile, Argentina were clear Copa América favorites and were off on the right foot with a 2-0 lead against Paraguay. It was a match they ended up drawing 2-2, and included Messi’s only goal of the tournament. Yet he was still creative, adapting well to the more physical play and compressed space. Unlike early in his international career, his lack of goal scoring did not mean anonymity on the field, but despite Messi’s marked improvements for his country, they still finished as runners-up to Chile, losing the final on penalties, in a shootout where Messi was the only Argentine to convert his spot kick. It was the second straight summer that Argentina failed to win a final, and although it was Ever Banega and Gonzalo Higuain who missed their penalties, most of the blame fell again on Messi.

Last December saw Lionel Messi hit back against his critics. He attacked the notion that Argentina lost their two finals because they, and specifically he, did not put in enough effort in those matches. He explained why he doesn’t sing his national anthem before the match. It seemed unfair to him, and rightfully so, that he receives this criticism just after reaching two major tournament finals.

This past month in the Copa América Centenario, Messi seemed to answer his critics. He scored a hat trick in his first match of the tournament and a goal and two assist in both the quarterfinal and semifinal matches. He broke the Argentina all-time scoring record against the United States and ran every match. No one could stop him, and the final against Chile was supposed to be his coronation. But a narrow field at MetLife Stadium and a Chile team that wasn’t afraid to foul ended his dominance. He was still the most dangerous Argentinian player on the field, but Chile did just enough to keep Messi from scoring, or even from having the best chance. Once again, Gonzalo Higuain would have that chance, and once again he fluffed his lines. But in the shootout, after Arturo Vidal missed his penalty, Messi skied his penalty, and Argentina went on to lose the shootout 4-2. As it stands, it’s his last kick of the ball in a blue and white shirt and the end of the pressure to exorcise the demons that plagued his Argentina career.

The first of his frustrations is to dispel those early years of his Argentina career, which were underwhelming. He had to be constantly superb to make up for his subpar performances as a youngster, including a scoreless World Cup in South Africa. In many of his matches since, he has been just that, superb. But even that was not enough for the Argentinians because none of these big performances came in a final.

One of Messi’s great strengths is his ability to elevate his game when necessary. Regardless of all the records he was able to set with Argentina and his success on the scoring charts in two of the past three major tournaments, including winning the Golden Ball at the World Cup in Brazil, he was unable to provide that magical goal or pass for Argentina in finals. For Barcelona, Messi has scored in two of his four Champions League finals he won and was hugely influential in a third without being on the scoresheet. This year’s Copa del Rey final featured two assists from Messi in a 2-0 extra time victory for Barcelona. For of all his success and trophies won at Barcelona, he was never able to break through for Argentina in his four senior cup finals played, three of them being in the last three years, not scoring in any of them. Whatever the issue was, Messi and Argentina haven’t been able to figure out how to win a final yet, an issue that never plagued Argentina’s other great.

No one in Argentina will ever call Messi the best ever, at least not those who remember 1986. They will remain partial to the man who casts the biggest shadow over Messi, the very man who was his manager in South Africa. Diego Maradona’s Argentina career ended in ignominy after failing a drug test at the 1994 World Cup in the United States, but eight years earlier in Mexico, it was the diminutive, left-footed playmaker who carried Argentina to their second of two World Cup titles. Maradona did what Messi could not. That’s why Messi had such a high burden of expectation with Argentina. Someone already did it.
Statistically, Lionel Messi’s Argentina career is one to be envied. He scored 55 goals for La Albiceleste, a record, in 113 matches. A goal in every other match would be impressive for most players, but considering that Messi had a slow start to his international career, his performances for Argentina were incredible once he got over the hump and came closer to his nearly one goal per game record for Barcelona. Yet the constant criticism he received from the Argentine media led to frustration and no doubt contributed to his decision to retire from the national team on Sunday night, two days after his 29th birthday. A return is not out of the question, but it won’t be quick. Messi will have no desire to go back into the crucible he just left, where every mistake he makes is criticized and his successes hardly celebrated. But if this truly is the end for Messi and Argentina, La Albiceleste have lost a truly special servant. The magic that he created in Brazil two summers ago and in the United States this summer was a wonder to watch, and the thought of Argentina playing as fluidly as they did without Messi is not one that I can envision. Trophies or not, Lionel Messi’s illustrious career was not only for Barcelona, but for Argentina as well. It’s a shame that the country he served will remember him, the most talented player of a generation, and in my opinion ever, as only second best and still would have even if he scored 100 goals in 113 games for Argentina. A trophy was the only thing that could propel him to god-like status in Argentina, the only way for him to finally catch his shadows. 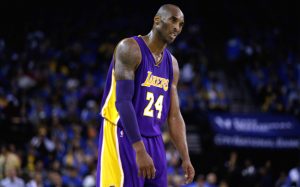