Inches Away: Women’s soccer struggles to break down Providence in Big East opener

“We’re a bit disappointed” said head coach Dave Nolan. “I just don’t think we had that little bit of quality that we normally have.”

From the outset, the Hoyas played in the Providence half, making Providence goalkeeper Kristyn Shea stay active throughout the match. Shea took the ball off the feet of sophomore forward Amanda Carolan in the early minutes of the match, foreshadowing the work that she would have to do all game long. Shea also came to claim Corboz’ first corner of the match, but she fumbled it, only to be bailed out by the referee’s whistle. Corboz tested Shea with these types of corners throughout the match, and she was always given the benefit of the doubt.

“Half the battle with keepers in those areas is confidence to come for the ball,” Nolan remarked. “(Corboz) knew coming for some she would get some, but she also knew unfortunately, in the game today, if a goalkeeper screams, the referee is always going to look for a foul because that’s less controversial than a goal going in and the keeper claiming she was fouled.”

Later, a corner that the Hoyas connected on was cleared off the line by a Providence defender. About halfway through the first half, Corboz found Carolan in the box only for Carolan to see her shot saved by Shea’s legs.

It wasn’t until late in the half the Providence was able to break out of their defensive shell, finally testing sophomore goalkeeper Arielle Schechtman with both a shot and a flick on that she did well to claim with a forward challenging. Graduate student forward Crystal Thomas nearly carved her way through the Providence defense in the final minute of the first half but eventually ran the ball out for a goal kick.

The second half began with Providence turning the tables on the Hoyas, forcing Schechtman into an early save and also putting a shot just wide of the goal. “To be honest, games like this require more from us than big games where we all know individually what we need to do,” said Schechtman. “As a goalkeeper, you really need to work on staying focused in games like this because if you have a moment of lull when they’re getting a breakaway… it’s hard, so you just need to make sure you’re staying focused.”

The Hoyas quickly weathered the storm and were back on the front foot. Sophomore winger Caitlin Farrell constantly used her speed to break down the right hand side while the midfield trio of Corboz and fellow juniors Taylor Pak and Chloe Knott continually found her runs. The Hoyas kept mounting more and more pressure onto the Friars and it nearly told in the 80th minute.

Senior winger Grace Damaska found Corboz with a cross from the right hand side. Corboz took her first shot and saw it blocked by a defender. The rebound fell kindly for her, and she took a touch and saw her second shot saved by Shea. Corboz latched onto her own rebound again and sent her third shot past Shea, striking the inside of the post and rolling across the face of goal, but never crossing the goal line.

Graduate student defender Marina Paul was cautioned in the next minute and Providence’s ensuing free kick was saved by Schechtman. Farrell had an opportunity at the other end before the end of regulation, but her curling shot was deflected inches beyond the far post.

Overtime went in much the same way as regulation time: Georgetown pressed and Providence sat deep and compact. Tempers ran high as a few more tough tackles flew in during the extra twenty minutes played. Towards the end of the twenty minutes, a Providence assistant coach was issued a caution, but neither team came close to scoring with the exception of a Crystal Thomas header and several Georgetown corners.

“That was always their plan, just to disrupt us, and try and get us out of a rhythm and just really try and counterattack with three players,” commented Nolan. “They’ve got some players that can score goals and the positive for us is that we kept another shutout.”

The Hoyas amassed nineteen shots and thirteen corners on the day. Shea made seven saves while two other shots on target were blocked by other Providence defenders. Typically, one of those shots will go in, but the Hoyas couldn’t quite put one away.

“I think if it was a boxing match we would have won on points, but you’ve got to score a goal,” said Nolan.

The Hoyas next chance to score a goal is against the Villanova Wildcats (2-8-0, 0-1-0, Big East) at Shaw Field on Thursday. 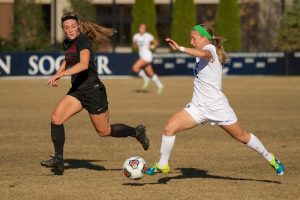