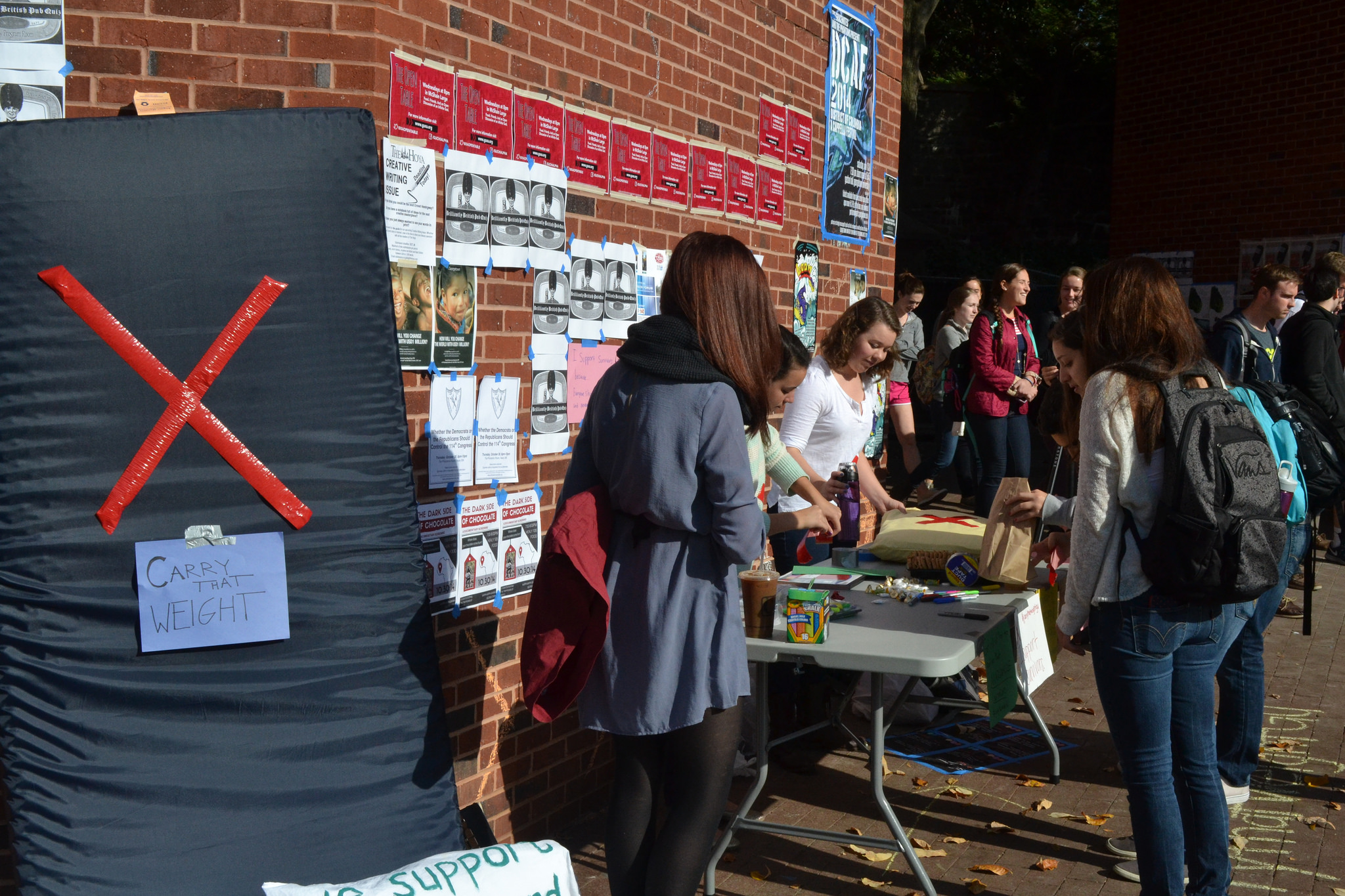 Mine is blue. My neighbor’s is lavender, one sparkle shy of a Bedazzler. They match our outfits; they fit in perfectly. I’m talking about our cans of pepper spray. Designed to fit seamlessly into purses and bags, the little tubes look innocuous, effectively disguising the truth of their contents. Our mothers sent us to college with them hoping they’d help protect us when they couldn’t do so themselves.

We are constantly inundated with statistics telling us how likely it is we will be sexually assaulted in our lifetimes, particularly during college. This June, Georgetown released the results of a survey on sexual misconduct taken by 7,926 Georgetown students, given in an effort to assist the university in combatting this problem on campus. Thirty-one percent of female undergraduates and 10.8 percent of male undergraduates at Georgetown reported experiencing “non-consensual sexual contact by physical force or incapacitation.” Nearly half of all students have reported in this survey instances of sexual harassment since attending Georgetown. Since August 3, four sexual assaults have been reported on or around Georgetown’s campus. So far in 2016, six sexual assaults have been reported, up from three in 2015 and four in 2014. Despite the fact that the D.C. Metropolitan Police Department recently arrested a suspect, this series of attacks makes it difficult for girls to feel secure. Instead, it emphasizes the perceived need to constantly be prepared to defend ourselves from violence.

There exists an entire market of self-defense products, designed to help women feel safer. The Well Armed Woman, an organization devoted to providing for the intersection between femininity and weaponry, sells a self-defense keychain called “Brutus.” The website advertises, “Guard yourself against unwanted advances: put your fingers through the eyes of Brutus and watch the tips of his ears transform into pointed jabbers that will keep any attacker at bay.” Another group, Undercover Colors, is dedicated to developing a nail polish that changes color when exposed to date rape drugs. Perhaps most outlandishly, Mace sells a pink pepper spray gun.

Don’t get me wrong: I think it’s great that these types of products exist, for no other purpose than to offer women some sense of security. But first of all, we should be doing more as a society to combat sexual violence at large and to denormalize rape culture. As of now, we are just attempting to prevent violence on a case-by-case basis with the use of these defense mechanisms, as opposed to tackling the problem at its roots.

Second, the modes of protection shouldn’t be so clearly gendered. I understand that one could argue that an innocuous, pretty-looking pepper spray can might blend in better, hiding the fact that it’s actually a weapon until it’s in use. However, why is it that brands like Mace don’t think girls can use gender-neutral forms of defense? A girl could just as easily carry a black pepper spray can, and no one would be the wiser. Why is it that, even in the context of defending oneself from attack, males and females are separated by archaic gender divisions?

Girls are taught defense mechanisms. We go everywhere with friends, especially at night. We don’t take drinks from anyone, especially not guys. We keep our keys hidden between our knuckles. We have signals so that friends know when to rescue us from uncomfortable situations. And again, some of us carry pepper spray or rape whistles. We know that people, particularly men masquerading as college boys, are out to get us.

So when we see pink pepper spray guns and bulldog keychains, we may be tempted to laugh at the ridiculousness of the fact that even self-defense companies reinforce outdated gender stereotypes. However, I don’t think that’s necessarily wrong. My advice is to try to find the humor in the situation. Buy these products; carry them with you if you will. Laugh. Laugh at the fact that our society wants only to treat the symptoms of rape culture and not to find a cure. Laugh at the fact that these companies profit off of violence. Laugh to prevent yourself from thinking too hard about the real reasons these weapons are necessary.

Sienna is a freshman in the college.