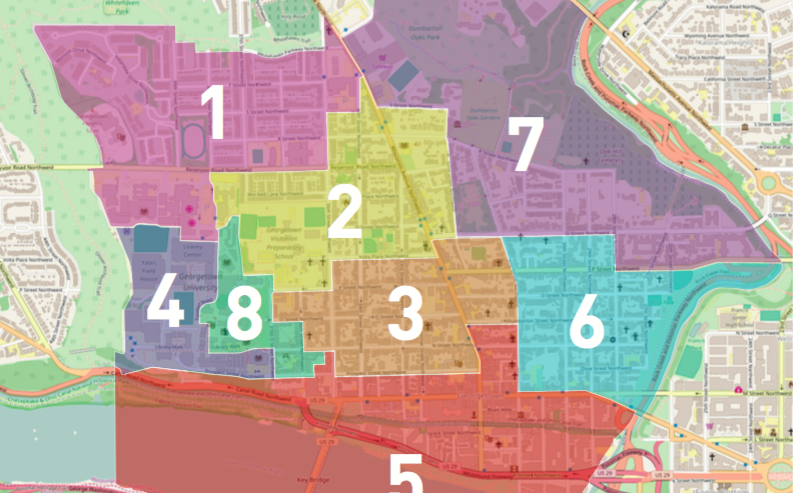 The Eight SMDs of ANC2E. From OpenStreetMap Contributors and Jake Glass.

On Nov. 8, residents of the Georgetown neighborhood will turn out to vote on the members of Advisory Neighborhood Council (ANC) 2E.

ANCs are neighborhood committees which advise D.C. government agencies on policies that will affect residents. Because the University is within ANC2E, the commission also has a role in making decisions that impact students. ANC2E encompasses the Georgetown, Hillandale, and Burleith neighborhoods, as well as the university itself.

According to Reed Howard (SFS ’17), the current commissioner of Single Member District (SMD) 08, the ANC influences policies affecting trash disposal for off- campus students, noise violation punishments, and the Student Neighborhood Assistance Program (SNAP), among others.

Relations between the ANC and the university have been uneasy in the past. Tensions flared in 2010, when disputes between the university and the ANC over Georgetown’s 2010 Campus Plan were settled in court. This conflict led to a number of unpopular compromises for the university, including a three year minimum on campus residence for undergraduates, and stricter enforcement of noise violations.

In response to the events surrounding the 2010 Campus Plan, there was an increased interest on campus in student representation on the ANC, and the Georgetown Community Partnership was created. As a result, the 2017-2038 Campus Plan was a much more collaborative effort, and the ANC2E approved it unanimously.

According to Howard, a major goal of the ANC going forward will be to enforce this plan. “The ANC commissioners representing Georgetown University will have a particularly important role to play when it comes to the implementation of the campus plan. Much of their work will be about shaping how the plan is lived out,” he wrote in an email to the Voice.

ANC2E is divided into eight SMDs, each of which is represented by one commissioner. As the election comes closer, the Voice has prepared a guide to the representatives from SMDs that include the university and the nearby area.

Ed Solomon is running unopposed for reelection to be commissioner of SMD 01. With a number of veteran ANC commissioners stepping down or facing a contested election this year, Solomon, who has served on the ANC since 2005, will be one of the most experienced commissioners in the next term.

Solomon has an established record of service to the community, with a focus on safety. “One of my goals is that our community stays safe, not just for residents, but for University students too,” he said.

Solomon is the chair of ANC Safety Committee, and is the liaison between the ANC and the Metropolitan Police. He was also involved in the development of DC Alerts, a pilot program which went on to become the basis of AlertDC, the city’s mass emergency communication program, as well as the basis of Georgetown University’s HOYAlert.

Solomon is also in regular contact with the University through his position as chair of the Safety and Student Life Committee of the Georgetown Community Partnership, and considers his relation to the university to be positive. “I’ve had excellent relations with all the student presidents running back the last three or four, and [done] lots of work committed to putting into place the programs that students are requesting,” he said.

Regarding the most recent campus plan, Solomon, who voted in favor of approving the plan, is optimistic that it will continue to be implemented through the next term. “I don’t think there will be any speed bumps, as far as the collegial relation we have between the community and the University,” Solomon said.

Rick Murphy is one of two candidates running for the contested position of commissioner of SMD 03.

Having lived in the Georgetown neighborhood for 13 years, he believes that his personal attachment to the area is his greatest strength as a candidate. “I’m well connected to the neighborhood, I’ve been here for a long time, and I’ve practiced law for many years, which may come in handy,” said Murphy. “I know what it’s like to be a resident.”

Murphy is a part of the Environmental and Landlord Initiative, a working group within the Georgetown Community Partnership that monitors garbage removal in the area surrounding the campus and the safety of off-campus housing by cooperating with the D.C. Department of Regulatory and Consumer Affairs and local landlords.

He has also provided legal help to Ed Solomon, the chairman of the Fair Skies Initiative. The initiative leads an effort to minimize noise due to air traffic in the neighborhood and the university by changing the northbound departure flight path from Ronald Reagan National Airport.

In Murphy’s opinion, his main priority as ANC commissioner would be to continue to collaborate closely with the University and maintain the positive relationship that allowed the current campus plan to be approved. “The work that led to the current campus plan…was very successful, very collegial,” he said. “People had different points of view but they worked them out, and we need to continue that, because I think the relationship between the University and the neighborhood is the best it’s been since I’ve been here.”

Greg Miller (SFS ‘14) is Murphy’s challenger for the position of commissioner of SMD 03. Miller, who joined the Transportation and Parking working group of the GCP as an undergraduate and is still a member, now works for Georgetown University as the Sustainability Coordinator in the Office of Sustainability.

Miller’s campaign is centered around ideas for reform in a number of specific areas of policy. Ensuring safety and convenience in terms of local transportation, maintaining a healthy environment within the neighborhood, and preserving Georgetown’s public spaces are among Miller’s priorities.

Miller also hopes to maintain and further develop the current positive relationship between the University and the ANC and to continue to take student perspectives into account. “I hope that our ANC will continue to work with all of our constituents, including students, to improve our community experience for all,” he wrote.

Mara Goldman (SFS ’19), the incumbent commissioner of SMD 04, is running unopposed for reelection this November.

Goldman began to serve in June 2016 after the departure of Kendyl Clausen (SFS ’16), and as a result has not served a complete term. However, Goldman was on the ANC in August when the 2017-2038 Georgetown Campus Plan was proposed, and voted to approve the plan.

She feels that the campus plan is the result of improving community relations. “[It] was the product of years of work and cooperation between the University Administration and the Community and reflected a new era of collaboration and communications between the two parties,” she wrote in an email to the Voice.

In her next term, Goldman hopes to build off of the positive relationship between the ANC and the university that has come about in the wake of the plan’s approval. “In this upcoming term, I hope to work with a new commission in maintain collegial relations between the students, the university, and the neighborhood,” she wrote.

Goldman feels that her position as both ANC commissioner and student at the University gives her the opportunity to advance student interests in community.

“Student presence on the commission gives us a voice in all this community development. As a commissioner, I have access to meetings with University Administration as well as community leaders,” Goldman wrote. “I consider myself a link between the community, the student body, and the university administration.”

Zachary Schroepfer (MSB ’19), another student candidate, is running unopposed for the commissioner of SMD 08.

Schroepfer has had experience in developing relations between the University, the community, and local government, having been a part of the Master Planning and Community Engagement working groups of the GCP, as well as the D.C. and Federal Relations committee of GUSA.

Improving housing for students through his involvement in the ANC is a main priority for Schroepfer. “The administration and the neighbors have agreed that we need to renovate housing, because it’s abysmal in a lot of places,” said Schroepfer. “By the end of this semester we’re going to have a timeline of when which buildings need to be renovated according to this professional consulting group which has provided this information for us,” he added.

Schroepfer also expressed his interest in improving relations between the University and the surrounding neighborhood through his position as ANC Commissioner. “We’re meeting with neighbors because no longer do we want this idea that it’s students versus neighbors, and we’re competing for who has more power in the neighborhood,” he said. “Why don’t we say, ‘What’s best for both of us?’”

Schroepfer also worked as part of the GCP on creating the 2017-2038 campus plan. “I collaborated in assisting the nalizing of the campus plan,” he said.

According to Schroepfer, as the only students on the ANC, he and Goldman will have a unique responsibility to advocate for students through their positions as commissioners. “We’re the only student representatives who are in the D.C. government,” said Schroepfer. “If we see student’s rights being violated within the district, we’re the liaison to say that this isn’t right.”