Home » News » Leftist group tries to establish itself on campus 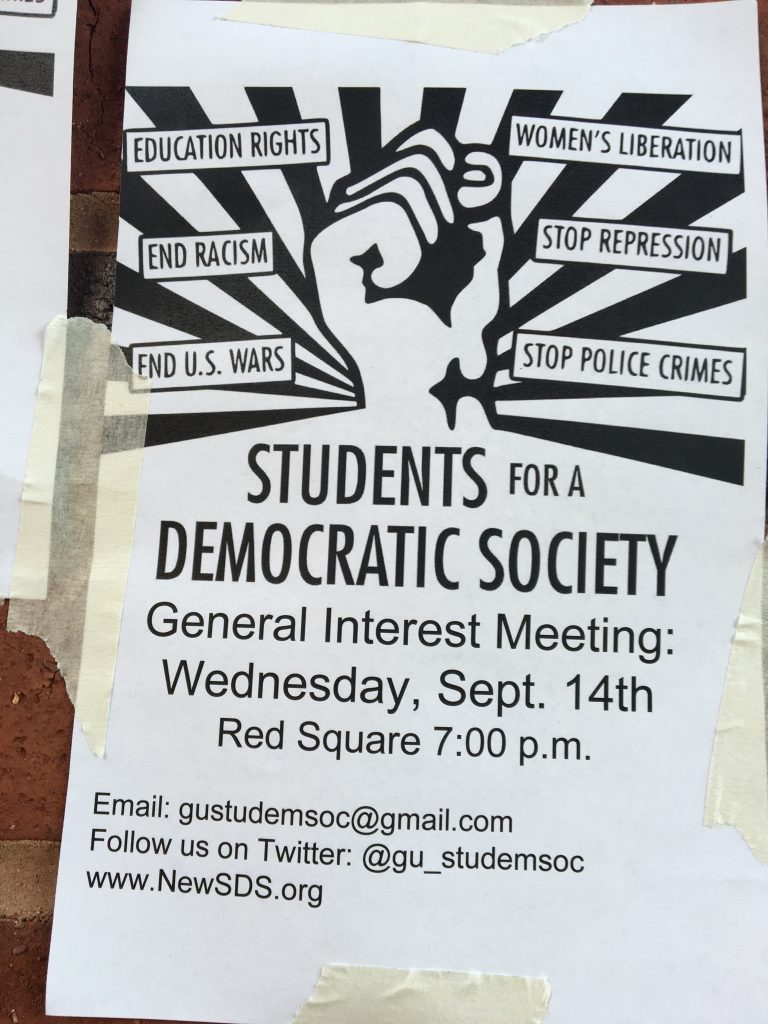 Leftist group tries to establish itself on campus

A group of students are starting a Georgetown chapter of New Students for a Democratic Society (New SDS) this semester. Despite initial struggles with poor attendance, the organization has had more recent success and is planning a variety of activities for the rest of the school year.

According to the New SDS website, the society is a chapter-based radical student organization located at many high schools and colleges throughout the country. The organization started in 2006, modeling itself off of the original Students for a Democratic Society (SDS) that was active on college campuses throughout the 1960s.

Gabe Mielke (SFS ‘20), the founder of the Georgetown chapter, said he wanted to create a New SDS chapter at Georgetown because he felt that an umbrella leftist group was missing on campus. “We have a lot of specific social justice issue groups that focus on workers here on campus or reproductive health issues or a million and one different things,” Mielke said. “But we don’t have any sort of really broad student organizing group that focuses on organizing students for broader issues in the entire world.”

The group held its first meeting Sep. 14; however, only four students attended. Despite the lackluster attendance, Mielke wanted to continue trying to organize a chapter on campus. “The advice I’ve gotten from fellow SDSers from other campuses is that at the beginning, it’s very hard to get anyone involved because it’s such an obscure club and obscure organization,” he said.

Vincent DeLaurentis (SFS ‘17), a student who attended the first meeting was optimistic about the future of the club. “In my opinion a Marxist, political space at Georgetown is really needed,” he said. “But I think to get that going off the ground, it’s going to take a lot more sustained organizing and a lot more critical thought about what’s happening at the university and how people can best plug that kind of political ideology into it.”

Mielke continued advertising for the club with flyers in Red Square along as well as mentioning the group in other leftist spaces on campus, and as a result, a total of nine people attended the second meeting. Members discussed possible events including a book discussion club, speakers, debates, and the process of becoming an official student organization.

Mielke’s vision for the club includes working with existing social justice organizations on campus while also organizing around political issues in D.C. outside the front gates. However, he stressed that the club is democratically-run so any member can shape the club’s purpose. “The club itself would really decide how it goes,” Mielke said. “But what I would love to see happen is a large group of students who actively and regularly organize around events happening here in the D.C. area in terms of politics as well as lending their aid to the various social justice issue groups here on campus and their campaigns.”

According to Jordan Brown (COL ‘20) who attended the second meeting, the democratic nature of the club was something that stood out to her. “I really like the fact that we get to be part of making this organization what we want it to be because it’s just starting. So being able to put in our ideas, and it being very open, very friendly, very welcoming environment was great,” she said.

“Georgetown was known as a place where, when anti-war demonstrations happened in Washington, people would come and stay here in the dorms, but there was no actual left-wing student organization I don’t think until pretty late in the ‘60s,” he said.

The 1960s organization on campus had several problems of its own. The House Committee on Internal Security investigated the organization in 1969 and were fraught with concerns about, among other things, a movie screening attempting to earn sympathy for the Black Panthers, a protest of the mayor of San Francisco’s visit to Georgetown, and discussions promoting socialism.

The commitment to leftist politics that inspired many students to join the organization at Georgetown in the 1960s continues to draw many student into the new chapter. “I think it’s important for us to have leftist organizations at a place like Georgetown. College campuses are always left-leaning from the rest of the world,” said Brown. “College campuses and college students have so much power … so I think it’s important to have an organization like this.”

The Girl on the Train is Subtle, Bone-Chilling
Taste Test: It’s Poppin’