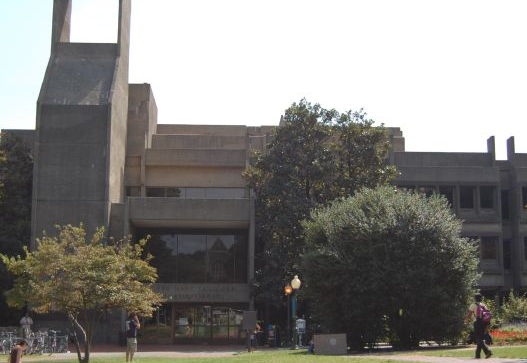 GUSA senators debated a referendum proposal about a smoke-free and tobacco-free campus at their Oct. 16 meeting. The Senate will again debate an updated version of the original proposal, sponsored by Senator Henry Callander (COL ‘18), and possibly vote on Oct. 23.

Smoke Free Georgetown, a campaign led by Callander and Mac Williams (NHS ‘17), organized the petition calling for a referendum. Williams had this idea since his sophomore year, but after facing several obstacles over the course of the previous academic year, he started the petition at the beginning of this semester.

“Ultimately, the goal is to bring the university up to the standards of our peer institutions and just try and look out for the health of all faculty and staff, and specifically students obviously as well as any visitors to campus,” Williams said. “The goal of the whole Smoke Free Georgetown movement is to get a referendum and to have a vote so all students are able to get their voice heard. We’re just kind of the messenger.”

According to Callander, Smoke Free Georgetown’s petition received 426 signatures by the start of the Senate meeting. This number surpasses the 300 signatures that GUSA by-laws require for a senator to a sponsor a referendum for the Senate to approve.

The official language of the referendum asked the respondent to either agree or disagree to the question: “Georgetown University should be smoke and tobacco free.”

“It will likely undergo multiple changes and amendments throughout the week before it’s presented on Sunday including the specific language of what will go on a potential referendum ballot,” Mullaney wrote in an email to the Voice.

During the meeting, several senators addressed concerns about a variety of issues with the bill. Many senators thought that the bill was too black-and-white and did not allow for alternate options like designated smoking areas. Senators also raised concerns about the exact boundaries of Georgetown’s campus and whether or not the school should prohibit only tobacco smoking or whether the ban should cover all tobacco products.

The Senate will hold a debate with comments from the public at their Oct. 23 meeting, and while they initially planned to vote at the same meeting, a unofficial vote of senators showed that many are in favor of tabling the vote until Oct. 30 in order to allow students to voice their concerns during a Oct. 24 Hoya Roundtable and for senators to adapt the language of the referendum during unofficial, closed-door Senate meetings.

In an Oct. 17 email, the university’s Senior Vice President and Chief Operating Officer Christopher Augostini wrote, “for this Hoya Roundtable, University leadership will share brief remarks on project updates for a smoke-free campus proposal, followed by a Q&A session to discuss topics related to smoking on campus, designated smoking areas and what a smoke-free campus would entail.”

According to Mullaney, the Senate requires a two-thirds majority to pass the referendum proposal. The outcome of the referendum is non-binding. The issue would then move to the university administration, which could then choose to formulate a policy, taking student input into account.

“Student referendums are non-binding, but they’re many times very influential in persuading the administration to take a specific course of action,” Mullaney said. “If the student body were to vote in favor of a smoke-free campus, that would be used by student leaders to convince the administration to institute that policy.”