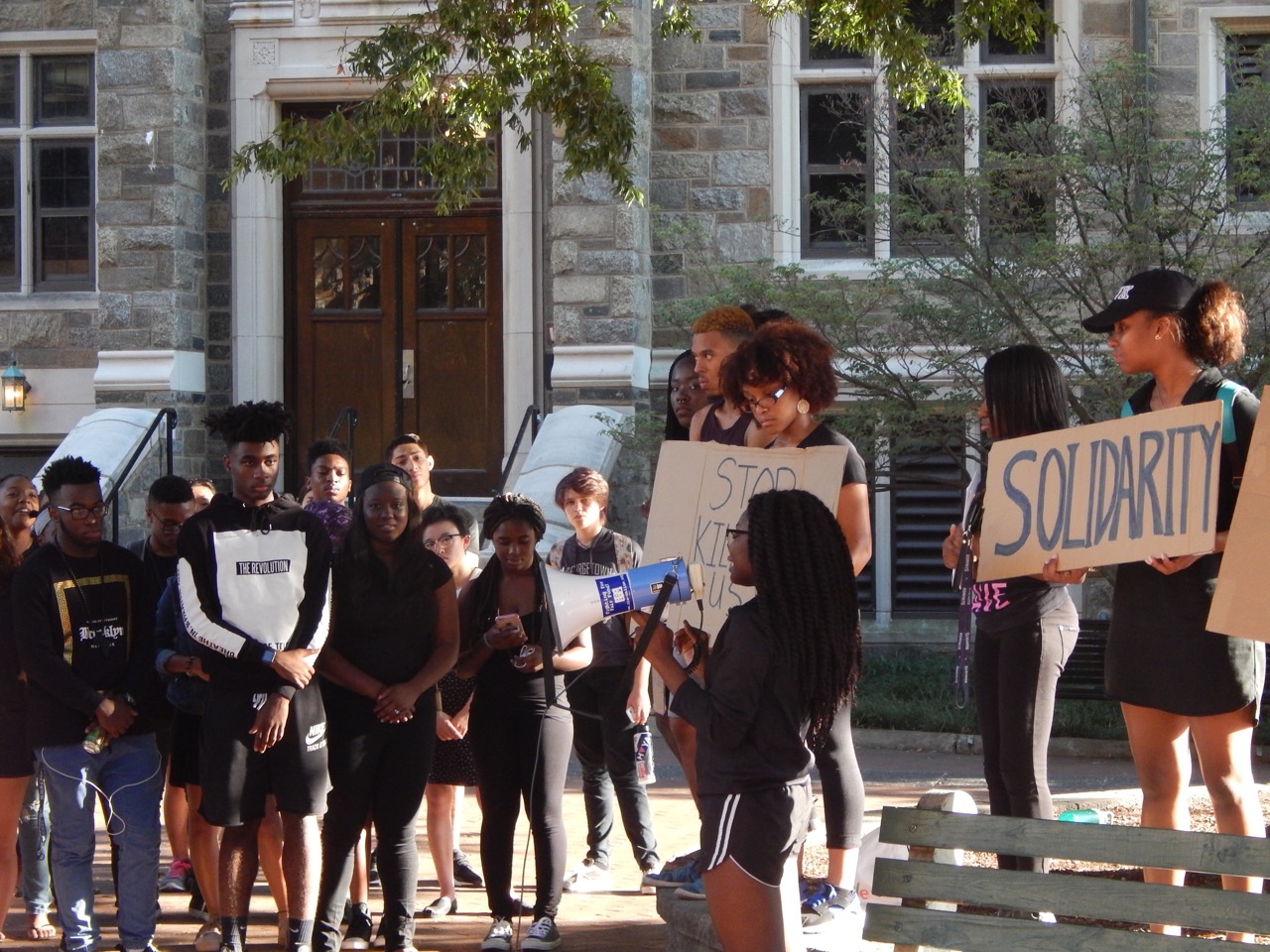 It has become clear as the 2016 presidential campaign has progressed that there has been a  resurgence of racial tensions on college campuses and a backlash against a culture of so-called “political correctness.”

Since the beginning of the fall semester, racist incidents on college campuses across the country have spiked, and it’s only October. Racist students have painted themselves with blackface. They have scrawled swastikas on dorm buildings. They have defaced a “free speech” wall with a crude depiction of a lynching and Donald Trump’s campaign slogan, “Build the Wall.” They have distributed fliers urging white women not to date black men. In response to a racial justice protest over the shooting of a black protester in Charlotte, North Carolina, one even tweeted, “I have a tree with room enough for all of them, if you want to settle this Old West Style.” Even at Georgetown, somebody had drawn and a swastika and the letters “KKK” inside a bathroom at the Medical Center.

Citizen journalism and self-publishing allow people to air their views to the world. In the past, it was difficult to share opinions with anyone beyond an immediate network of friends. Now, everyday people with no particular access to the establishment media can make their thoughts known. However, this can lead to the ability of racists to proliferate their ideas.

Twitter technically condemns hate speech, but that policy doesn’t necessarily stop tweeters. Social media amplifies racist voices and provides an outlet for spreading practically unpunished hate. Donald Trump has retweeted white supremacists, and in return he gets free media coverage, boosting his poll numbers and encouraging his supporters to jump to his defense. This lack of accountability normalizes racism and white supremacy.

It is easy to ignore racial tension when you are not directly exposed to it. If a student grows up in a segregated town, as many Americans do, college may be their first time encountering people of other races. In my senior year at my high school on Long Island, there were five black students in a school of around 750 people. According to the census, Long Island is the third most racially segregated suburb in America, mostly due to historic housing discrimination, a racist practice intended to confine black people to specific neighborhoods. Many students in my school have never interacted directly with black students, thus making it easier to make derisive jokes or offensive comments because there’s no one around to offend.

For students who lived in environments where racist comments were more permissible, college might be the first time where they encountered diversity and were confronted about the nature of these jokes.  The problem is that it’s easy to dismiss criticism if you’ve never received it before. It’s easy to deride the offended party as “too sensitive.” But it’s also easy to retaliate to the other extreme. Racist incidents on college campuses represent a backlash against decreasing social acceptance of racist attitudes. As our society as a whole moves toward condemnation of racism, people who harbor offensive beliefs lash out.

Rebellion against political correctness and so-called “P.C. culture” has only been encouraged, validated, and normalized by Donald Trump. We shouldn’t censor hate speech, even if we could, but it is “deplorable.” When people see a major presidential candidate who is unafraid of offending people, some find it refreshing to think that “finally, someone talks the way I do, thinks the way I do, and is unafraid of defying societal conventions.”

Political correctness is not censorship. It means respecting people and the terms by which they prefer to be addressed. I acknowledge that the right to freedom speech is a fundamental principle upon which our country was founded. All Americans technically have the right to say awful things. But they should think about why they want to say them. If you don’t treat people with respect, they also have the right to call you out on that disrespect, because that’s an expression of their freedom of speech as well.

In order to combat racism and promote inclusive dialogue, many universities are adopting programs that foster diversity and authentic engagement with difference. At Georgetown, for example, all students must take two “engaging diversity” classes, one domestic and one global, in order to graduate. The university claims that this newly-added requirement will “prepare students to be responsible, reflective, self-aware and respectful global citizens through recognizing the plurality of human experience and engaging with different cultures, beliefs, and ideas.”

Diversity education is a start, but it’s not enough to end racism in schools. The diversity requirement at Georgetown is altogether too relaxed. My Introduction to Creative Writing course fulfills both the domestic and global diversity requirements. While it has been an extremely valuable class in terms of improving my creative writing, I can’t say I’ve learned much about diversity thus far. It shouldn’t be this easy to fulfill such an important requirement. Taking classes on diversity may educate students on other cultures, but people don’t change deeply held views after two classes.

We have a presidential candidate who has normalized hate, giving a voice to the hateful side of America that we may have thought initiatives like diversity education had addressed. It will take a long time before we are able to eliminate this ugliness. Diversity initiatives are a start, as they acknowledge the importance of educating Americans about the historical and modern day experiences of different groups of people. But these programs need to be held to much higher standards. In order to effectively teach college students about the problems with racism, classes that fulfill these requirements must deal specifically and solely with issues of diversity and not other, vaguely related topics. It’s only then that we will begin to root out racism and combat incidents on campuses, making our colleges safer and more accepting of all students.

Sienna is a freshman in the college.