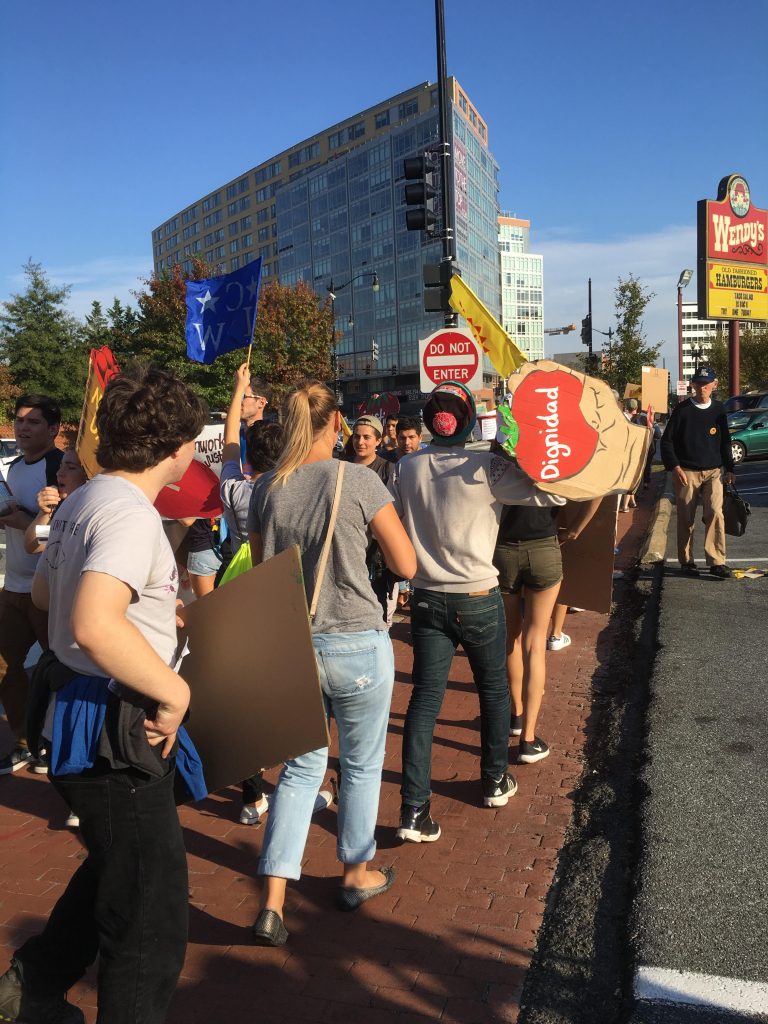 On Oct. 30, the university’s chapter of the Student Farmworker Alliance (SFA) attended a march from the White House to a Wendy’s on New York Avenue in order to protest Wendy’s refusal to join the Fair Food Program. Georgetown’s chapter of SFA coordinated with other university chapters, as well as the Coalition for Immokalee Workers (CIW), DC Fair Food, and the National Farm Worker Ministry.

Protesters marched through the streets of D.C., beginning in Lafayette Square and ending at the Wendy’s Restaurant on New York Avenue, holding signs with phrases including “DC Boycotts Wendy’s” and “Justice for Farmworkers.” The marchers also chanted slogans, including “Up, up with the Fair Food Nation! Down, down with exploitation!” and “Hey, hey! Ho, ho! Exploitation got to go!”  Seven Georgetown students were in attendance through the university chapter of the SFA.

The CIW, a worker-based human rights organization, organized the march, to pressure Wendy’s to join the Fair Food Program, a collaboration between farmers and buyers they introduced in 2011 to ensure humane working conditions.

According to the CIW website, subscribers include Burger King, McDonalds, Subway, Walmart, Whole Foods Market, and Trader Joe’s. But, as Pamela Escalante Gonzalez (SFS ’17) says, “Wendy’s is the last of the fast food chain giants to sign onto the Fair Food Program.” The CIW boycott has been ongoing since March, according to a CIW member.

Originally, Georgetown students supported the actions of the CIW through the Georgetown Solidarity Committee. “Georgetown Solidarity Committee has been involved for many, many years and have always brought down students to Immokalee [Fla., where CIW is based] during Alternative Break sessions or have brought them down to come to the encuentros which are large weekends for leadership development and strategy development,” said Carmen Mason, an organizer for DC Fair Food.  However, this year, a student group was formed on campus specifically dedicated to protecting farmworkers—the SFA. “The reason that [we] took an interest in this because we had worked with the CIW and the Alliance for Fair Food and other Student Farmworker Alliance members before, and we really liked what the CIW’s mission was and how they took in solidarity with students and other movements that affect student’s lives,” Gonzalez said, as one of SFA’s co-founders.

Mason emphasized the impact of students. “It’s important to have student support because Wendy’s specifically targets youth and students,” she said. “So to have students on campuses like Georgetown’s who are boycotting sends a very strong and clear message.”