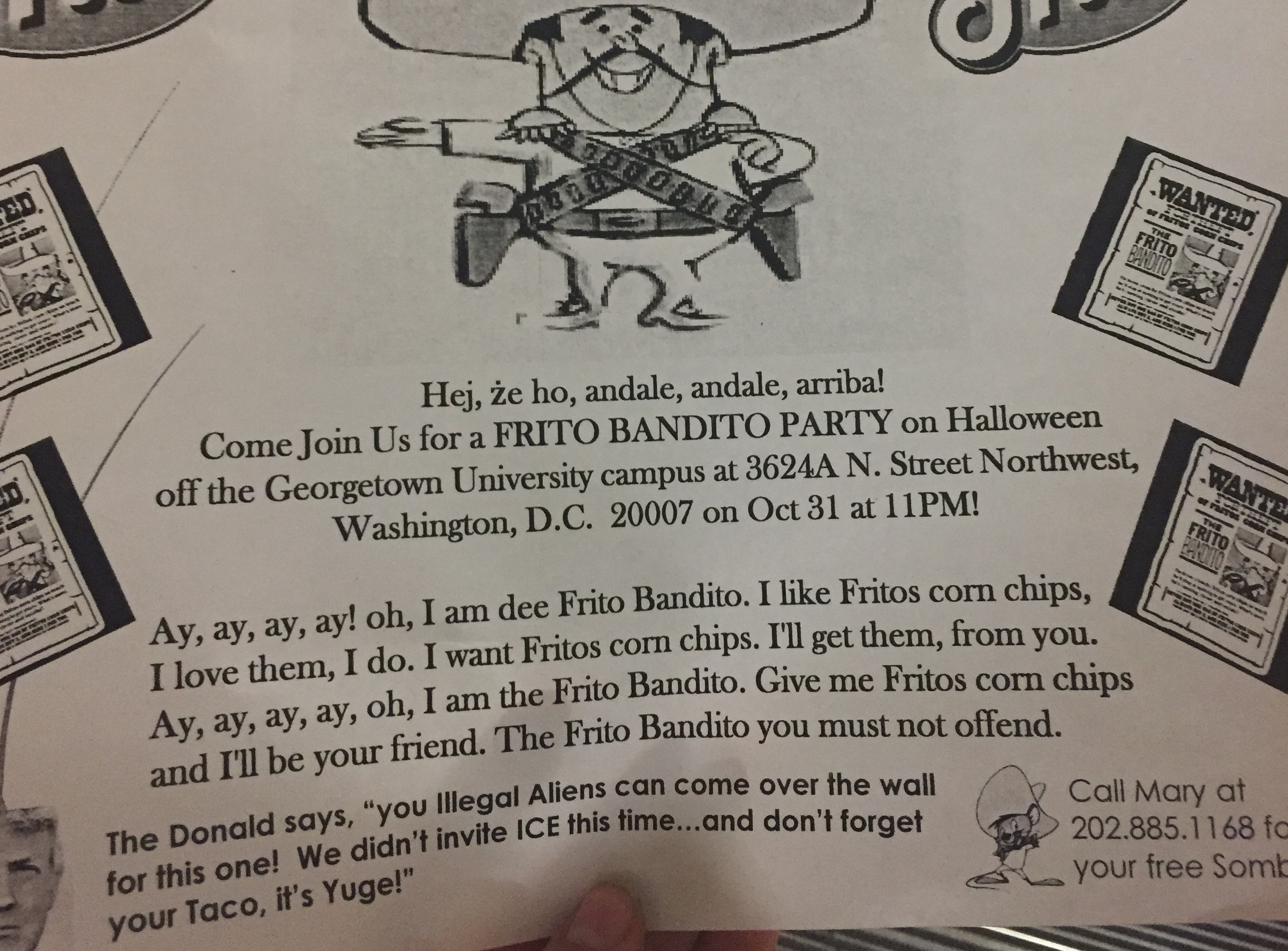 A flier posted at the Spanish and Italian departments and Latin American Studies program offices. The flier was also posted at other D.C. universities. Photo: Cassidy Jensen

Just before 7am on Oct. 31, doctoral student and Spanish instructor Chrissy Bistline-Bonilla discovered a flier glued to the door of the Spanish and Portuguese Department advertising a “Frito Bandito Party,” and featuring Latino stereotypes. Fliers were also found on the doors of the Italian and Latin American Studies Departments. According to an email sent by Provost Robert Groves, similar fliers have been found at other universities.

Bistline-Bondilla said she found one flier on the bulletin board as well as one on the main door of the department. Spanish and Portuguese Department Chair Gwen Kirkpatrick filed a bias report with Public Safety and Georgetown University Police Department (GUPD) is investigating the incident. “At this point this is an open investigation. My Criminal Investigations Unit will be investigating,” wrote Chief Gruber in an email to the Voice. GUPD visited the Spanish department Monday morning after the posters were found.

The fliers featured Fritos mascot the Frito Bandito and Warner Bros cartoon Speedy Gonzales. They also included references to Immigration and Customs Enforcement (ICE) and Donald Trump’s plan to build a wall along the Mexican border. A number listed at the bottom of the flier to call for a “free sombrero” reaches American University’s Center for Diversity and Inclusion.

In an email to students, Provost Groves and Vice President for Institutional Diversity Rosemary Kilkenny condemned the fliers, calling them “offensive.” “While we do not know if the individuals who distributed the fliers are members of the Georgetown community, their actions have caused concern,” wrote Groves and Kilkenny. “This behavior and language has no place in our community.”

Kirkpatrick suspects that someone unaffiliated with Georgetown made the fliers. “I don’t believe that Georgetown students would be so crass and stupid,” she said. Although she does not think the posters represent a negative current within Georgetown, she sees a society-wide bias against Spanish-speaking people. “Even in this university and in the United States at large, Spanish as a language and Hispanic or Latino culture is not valued in the same way as some other cultures,” said Kirkpatrick. She believes that the Spanish and Portuguese department does not receive the same level funding or have the same status as other departments, despite its programs being highly ranked. “We don’t get as much resources for our graduate students as other departments,” she said.

Bistline-Bondilla viewed the fliers as a dumb prank, but was upset by the ignorance she said the statements suggested.“They probably just thought it was funny and didn’t really think about whether or not it would actually upset or hurt people,” she said.  As the expectant mother of a half-Mexican child, she is anxious about bringing her baby into this kind of hostile cultural environment.

Kirkpatrick and Bistline-Bondilla both saw the fliers as aligned with presidential election rhetoric. “I do think the Trump campaign has stirred up some xenophobic and anti-Latino feelings,” Kirkpatrick said.

According to Bistline-Bondilla, the privilege of many Georgetown students can isolate them from the issues and experiences of others. “It’s hard for someone who’s really privileged to relate to that,” said Bistline-Bondilla, “Sometimes we forget that these issues affect real people and it’s much more complicated that Donald Trump’s rhetoric makes it out to be.”

“These are people’s lives we’re dealing with,” she said.