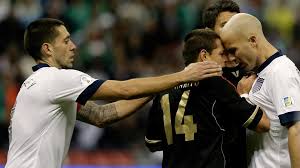 via The Mexican Times

College basketball may be dominating the sports world this week, but this month’s international break means the beginning of the final stage of 2018 World Cup qualifying in CONCACAF. This round is known as the Hexagonal round, given the six teams that make it up. CONCACAF couldn’t have asked for a better start than the two giants of the federation, the United States and Mexico, facing off at MAPFRE stadium in Columbus, Ohio. Both teams are looking to get their Hexagonal campaigns started with 3 points knowing that only the top three teams advance automatically to Russia while fourth place plays an aggregate playoff against Asia’s fifth best finisher.

Mexico leads the all time series with 34 wins, while the Americans have won 18 (+1 on PKs), and the other 14 matches end in draws (this includes the PK match). This series has included four matches in Columbus, all of which have been the USA’s home match against Mexico in the Hex. All four matches had the same scoreline: United States 2, Mexico 0.

Managers Jürgen Klinsmann for the Stars and Stripes and Juan Carlos Osorio for El Tri have released a 26- and 25- man roster respectively for the two qualifying matches of the international break. Each side has its own list of impact players. I take a look at my top 5(-ish).

Not on the roster – The crowd

Although they aren’t on the roster, there’s a reason the US loves playing Mexico in Columbus. Playing at some of the bigger stadiums around the nation (AT&T Stadium, Rose Bowl, Levi Stadium) often leads to a pro-Mexico crowd. Even other games at bigger stadiums (MetLife Stadium, Soldier Field) are large enough that even though they aren’t geographically close to Mexico, they’ll still attract a lot of Mexican supporters due to their sheer size. The US has created the “dos a cero” in Columbus because it truly is a home game for the United States. Cold weather certainly won’t hurt, but the US needs as much help as it can get from its supporters to beat a talented Mexican side. Not dropping points at home is a formula for qualification in CONCACAF. Look for the crowd to be loud and pro-US on Friday.

Jones was one of the team’s best players this summer in the Copa América. Having recently come back from injury, it’s still unclear just how much he can contribute, but a full healthy Jermaine Jones can only be a boost for the US.

Bradley has been at the heart of America’s midfield for what seems like forever, so it’s no surprise that the 29 year-old has worn the captain’s armband since Klinsmann removed the captaincy from Clint Dempsey. The Toronto FC man is the undisputed motor behind the American’s midfield and an inspired performance from him will be key to the USA controlling the game on home soil. Klinsmann will hope he gets 2016 Copa América Michael Bradley and not 2015 Gold Cup Michael Bradley. One typically sees the Americans win and the other typically see the Americans lose. No points for guessing which is which.

Yedlin had a breakout tournament in Brazil, where everyone saw him as the next big thing. But unlike his probable fullback partner Fabian Johnson, Yedlin has seen ups and downs since swapping Seattle for London and joining Tottenham Hotspur. Yedlin sees himself down in the Championship with Newcastle United, and has had seen success and failure for the United States in the past two years. After a good Copa América, Yedlin is likely to start at right back for the Americans and will look to along the right hand side, but it will be his defensive work, which historically has been a Jekyll and Hyde characteristic of Yedlin’s, that could decide the match against a group of dangerous Mexican scorers.

This is set to be Pulisic’s debut in the Hex, and the 18 year-old has a lot of American soccer fans buzzing in a way that has never been seen before. There’s Freddy Adu hype, and then there’s “this kid is tearing up the Bundesliga and clowning Sergio Ramos and Marcelo in the Champion’s League” hype. Pulisic has a willingness to take defenders on and the ability play the risky pass in the final third that can unlock even the best defenses in the world. Klinsmann will likely be hesitant to start Pulisic just like at this summer’s Copa América, but don’t be surprised to see the young midfielder being an impact sub to tilt the game in the Americans’ favor. He might be the single most talented player on either roster, so it would be a shock to see the Dortmund product sit for 90 minutes against a team like Mexico.

Brooks is by far the United States’ best defender, and one of the stars of the future. His ability to play out of the back is combined with size, strength, and pace to allow Brooks to match up well against any striker. He has become more disciplined as he’s gained game experience and was vital to the Americans this summer in the Copa América. With normal center back partner Geoff Cameron unavailable through injury, the Hertha BSC center-back will need to be on top of his game against a certain Javier “Chicharito” Hernandez to give the US any chance of taking a result from the match.

Altidore is in the best form of his career since leaving AZ Alkamaar for an unsuccessful stint with Sunderland in the Premier League. His career has been revitalized in Toronto where he and Sebastian Giovinco form one of the most prolific strike forces in MLS. With Clint Dempsey’s heart issues keeping him out of the lineup, Altidore is the most experienced goal scorer for the US. If Altidore can channel the scoring touch he had in the 2014 World Cup qualifying cycle, the US has a great chance to take three points from Mexico with the home crowd behind them.

Osorio has a reputation as a tinkerman, and throughout the Copa América, he never settled on a proper starting lineup. Most shockingly, he used all three goalkeepers during the group stages, and the lack of continuity showed in a 7-0 drubbing by Chile. It’s anyone’s guess who Osorio will choose for the match in Columbus, but he made sure all his stars were on the roster, so his plan will be to use as many of his difference makers as possible. Whether he can get this right and not be left vulnerable to the US strengths remains to be seen.

Peralta won’t start because of how loaded Mexico’s strike force is, but he just has a knack for scoring. He is the impact sub of all impact subs, not because he’s a handful for the US to mark, but because he doesn’t have to be involved in the game to be a threat. His goalscoring record of 23 goals in 52 caps speaks for itself, and if Mexico needs a goal late, Peralta will no doubt be coming off the bench.

Layun is one of Mexico’s most consistent performers. In the Miguel “Piojo” Herrera days, Layun was used at left back while Paul Aguilar was his partner on the right, but Layun has played both outside back positions before, and has even seen time at holding midfield under Osorio. Osorio’s choice of formation will likely dictate where Herrera plays, but if Mexico plays a 4-3-3 (which I expect), Layun will likely make his usual runs forward from left back. Lethal when  running down the line and crossing with his left, Layun is a right footed player. Like his opposite number Fabian Johnson, he has the ability to cut in on his right foot and play an inswinging cross or unleashing a formidable long shot that can force any keeper into a picture save, if they can even reach it. Layun at his best is an opponent that the US will struggle to keep tabs on, so expect Mexico to look for him early and often if he’s on.

Herrera is already Porto’s captain at age 26, and the central midfield playmaker is one of the best players in the Portuguese league. While Andres Guardado will likely be more of a holding midfield, how Mexico plays often depends on how Herrera plays. When he’s on form, he’s nearly impossible to stop. He has an impressive shot with both feet as well as excellent ball control and vision to spot players all over the field. He will likely match up across from the United States’ Michael Bradley, and if Herrera manages to get the better of that matchup, Mexico will have a dynamic player able to dictate the game and supply their ridiculous strike force. If he can’t, Mexico will lose the ball in places that could leave their back line exposed.

Vela is the problem child for Mexico. He’s had multiple run-ins with the team and wasn’t used in the World Cup in Brazil. This is his first call up in over a year after an underwhelming Gold Cup in 2015 for Mexico. The Real Sociedad winger may not see any time on the field in Columbus, or he could start. If Vela plays, he has the type of skill that initially got Arsene Wenger to bring him to north London in the first place. He could also have no influence on the game, so Vela presents another wild card for El Tri.

Mexico’s most in-form player is one that hasn’t been in the national team picture in ages. In his early days in Liga MX, Fabian had it all, although he never managed to take his club form to the international stage. Osorio hopes that Fabian can change that this international break. Fabian has three goals and four assists for Eintracht Frankfurt in the Bundeslinga, and his potential to drive El Tri forward and add another creative hub to join Herrera and Guardado must have Osorio salivating at the thought of all three of them on the field together. I would be shocked if Osorio didn’t give him the chance to influence the match from the start, as Mexico needs to take a foothold on the match from the get go. Fabian is another wild card for the Mexicans, but one with even more up- side than Vela.

The man speaks for himself. Since his move to Bayer Leverkusen, Chicharito has been unstoppable. He’s always produced for Mexico, breaking onto the international scene in South Africa and scoring twice at the 2010 World Cup on the way to 45 goals in 86 caps. He’s the player the Mexicans always look to for a goal, and in his current form, he’s unplayable. He’ll be a handful for John Brooks to deal with and is Mexico’s best chance to break the “dos a cero” curse.

Mexico is simply too good to lose this match. If the stars fire on all cylinders (keep in mind there’s still a certain Giovani dos Santos to deal with for the US), Mexico is far and away the more dynamic team against a US side that only has Christian Pulisic to turn a game on its head. If the US somehow runs away with another 2-0 win, there’s magic in the grass in Columbus because they have no right to see that scoreline again. 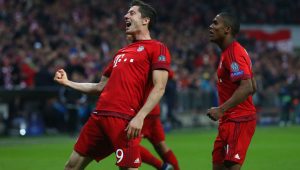