A friend of mine is making out with a guy on her hall when she asks him to keep his hands above her clothes. He doesn’t listen, so she moves his hands and tells him to stop. He apologizes, and they continue. The next morning, she texts me gushing about how great her night was.

Months later, she tells the story again to a friend. The friend tells her that she may have been sexually assaulted, and my friend starts to think about what happened in a different light. She begins to have panic attacks; she has trouble letting her boyfriend touch her. She cries whenever sexual assault is brought up in conversation.

How did this happen? How did a woman who had been fine, laughing and joking become traumatized?

Was it the action—being touched without consent— or was it the label attached to it?

Let’s take another scenario. My friends and I are at a club. A guy grabs a friend of mine and she tells him to stop. He continues to leer at her, and when she goes to the bathroom, he follows her. She tells him again to leave her alone, more forcefully, at which point he does. Later, I compliment her on how well she handled it, but she shrugs it off. She says that she had almost forgotten that it happened.

Could it be that our society has created a collective trauma culture—one where the expectation of trauma is, in itself, traumatizing?

To put it simply, absolutely.

Social justice discussions have come to a point where it’s expected to be traumatized after certain encounters that were once commonplace, and that expectation creates the symptoms of trauma. Have you ever gotten a diagnosis, googled the symptoms, and magically developed the ones you didn’t have before?

This is most prevalent on college campuses. When a controversial speaker came to campus, Brown University set up a room with stuffed animals and coloring books for its students who felt triggered. Coloring books. For 22 year olds. Actions like these create an expectation that enough students are so severely traumatized that they need to be in a room with bubbles and calming music.

People experience things differently, and what I think of as a minor inconvenience may be a life-changing trauma for somebody else. But when my friend is excited about staying up until 6 a.m. kissing this guy, doesn’t think another thing about it for months, and then is suddenly having panic attacks, I can’t help but think it isn’t an organic response to what she experienced that night.

What happened isn’t good—she was sexually assaulted, by the colloquial definition, not the legal one—but her reaction is not proportionate to what happened, and it shouldn’t be considered “normal.”

I’m not suggesting that trauma isn’t valid. Even if all trauma is caused by the society and not the experience, it’s still a legitimate trauma and deserves to be recognized as such. A panic attack is a panic attack, whether it’s brought on by society or chemistry or an experience, and survivors should be treated with empathy. Both men in the above stories need to learn that non-consensual grabbing is not acceptable, and there need to be stricter consequences in place for those who do not listen.

But the societal repercussions we have in place for perpetrators create the expectation that their crimes are so heinous that their victims must be traumatized, and so the victims are coddled and taken care of until they become traumatized simply because of the focus on trauma in their lives.

Saying that those traumatized after being grabbed in a club are a minority is unacceptable, because it makes the traumatized people feel alone. What many have suggested as a remedy is a culture that emphasizes picking yourself up by your bootstraps and trudging onwards. This sentiment suggests that trauma can be overcome by the sheer force of will. It is a 180 degree turn from our current reality.

I propose a middle ground. Here, we do not emphasize trauma; we do not create it where it does not exist. We acknowledge without celebrating. We create a culture where victims are comfortable coming forward but we do not push them into identifying with the trauma label when they would not otherwise do so.

We support without coddling. We accept that not everyone needs a coloring book. We help without pushing. We move on; we heal.

Rebecca is a freshman in the college and the author of the biweekly column, Open Access, for the Voice. 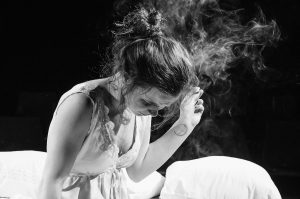