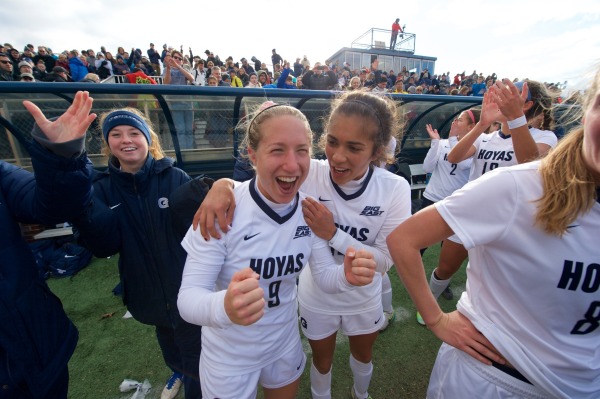 The start of first half reflected the nerves of both teams. Georgetown’s typical poise in possession was replaced by long clearances forward that redshirt freshman forward Amanda Carolan could only chase after in vain, while Santa Clara’s sophomore goalkeeper Melissa Lowder struggled with her kicking early. Georgetown junior defender Drew Topor was forced out of the game with an injury and was replaced by freshman defender Meaghan Nally.

But as the half progressed, the Hoyas regained the confidence that has carried them all season, quickly advancing the ball to the wings for sophomore forward Caitlin Farrell and senior forward Grace Damaska to cross. Lowder’s toughest test of the first half came off a cross from Georgetown graduate student defender Corey Delaney, catching the cross under pressure from Thomas.

The first half ended without a shot on target from either team. Lowder and Georgetown sophomore goalkeeper Arielle Schechtman weren’t needed beyond catching crosses and claiming through balls as neither team was able to dictate the play through the midfield.

The second half was more exciting than the first from the outset. Georgetown junior midfielder Rachel Corboz had two free kicks around the Broncos’ penalty area but was unable to score or set up a teammate on either of her attempts.

Schechtman was called into more action, punching away a high, looping cross from the right wing. Damaska recorded Georgetown’s first shot on goal in the 56th minute before Santa Clara’s senior forward Jenna Roering was played in beyond Georgetown’s defense in the 57th for a one-on-one with Schechtman. Schechtman stayed big for the first shot and made the save, but the rebound fell kindly for Roering to tap into the empty net. Inexplicably, Roering skewed her shot wide to the left. The Hoyas dodged a bullet. 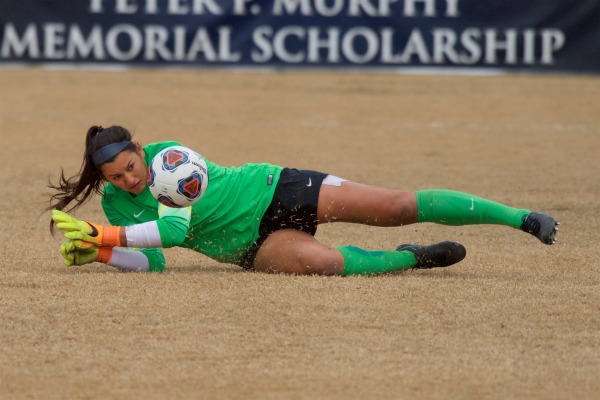 “She took a shot and I was able to get a touch on it,” said Schechtman. “She got the rebound, but thankfully she hit it wide, but one-v-one as a goalie you just have to make yourself as big as you possibly can.”

Two minutes later, the Broncos took a quick free kick from midfield that sprung an attack with the Georgetown defense scrambling. The resulting cross was controlled by the waiting forward, but she was unable to create a shot.

The Hoyas thought they had the breakthrough in the 67th minute. Junior midfielder Chloe Knott steered the ball into the back of the net from a cross by freshman forward Paula Germino-Watnick, but Germino-Watnick was deemed offside before receiving the pass.

Santa Clara wasn’t so lucky nine minutes later. Thomas had the ball on the left wing, running backward towards the middle. Near the corner of the 18 yard box, she uncorked a screaming shot into the top left corner, giving Georgetown the 1-0 lead with 14 minutes to play against a team that they had struggled to break down all afternoon.

The final 10 minutes featured a Santa Clara team throwing everything forward for an equalizer and a Georgetown team doing everything to keep the ball away from their goal. Schechtman punched away a driven free kick in the 84th minute. Four minutes later, redshirt senior forward Julie Vass shot well over Schechtman’s goal from 12 yards out.

But the real drama came from two 90th minute corners. With Lowder in the box, a Santa Clara player was able to get on the end of the first, forcing a save from Arielle Schechtman diving to her left that was then cleared out wide by the Hoyas for another corner. Schechtman came off her line in an attempt to punch the cross clear, but the ball flew just past her outstretched hand. Santa Clara’s header flew high, and Georgetown celebrated.

The Hoyas are the only team remaining in the field that is yet to concede a goal thus far in the Tournament, and their ability to shut teams down is a quality that Head Coach Dave Nolan prizes.

“We’ve got an outstanding center back pairing; we’ve got two very good fullbacks. We lost one today in the game, and we had one of our freshmen, Meaghan Nally, come in and she did an outstanding job, and we have a great goalkeeper” said Nolan. “With our team, there’s a hunger to pressure the ball, and it starts from our forwards all the way through our midfield three. We don’t allow teams a lot of time to settle on the ball and do what they want to do.”

The players showed no signs of the cold after the game as thoughts of San Jose (the site of the women’s College Cup) and Avaya Stadium warmed them up. 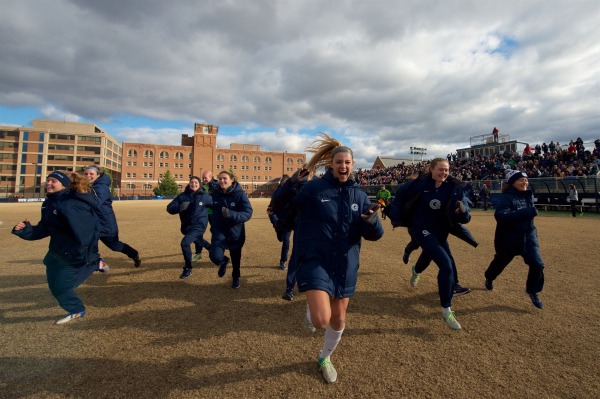 “We’ve worked really, really hard for this, and it’s come down to every single person working hard in practice, and that’s why we’re able to compete on the field,” said Thomas. “Even before August, last spring this is what we wanted to do, and now we need to go and take it.” 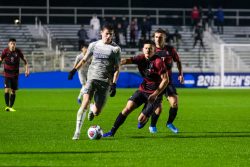