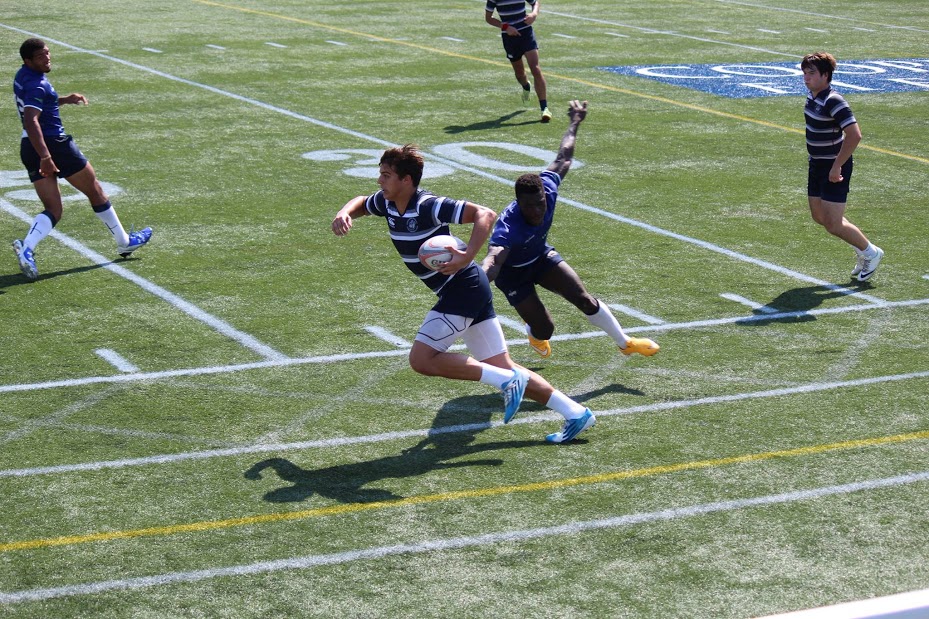 Despite being a very visible club team on campus, the Georgetown University Rugby Football Club (GURFC) plays a sport that is utterly foreign to most other students. But even if it is niche, rugby isn’t just a fad on campus. 2017 marks the 50th anniversary of GURFC’s founding in 1967. In 2001, the team began competing at the Division II level, with the fifteens squad making two runs to the Final Four round of the USA Rugby National Tournament in 2005 and 2009. Starting last fall, the team was promoted to the Division I-AA level, along with longtime rivals Towson and Salisbury.

GURFC fields two different teams for two variations of the game, a fifteen-man squad and a seven-man squad. The fifteens season is in the fall and the sevens season is in the spring, and many players overlap between the two squads. There are fifteen specific positions, but players are generally classified as either backs or forwards. Forwards are bigger but less agile, while backs are small, nimble, and quick.

“There’s all the hard hitting you’d find in football, and some of the strategies you find in soccer. It’s similar to soccer in that the game keeps moving. There’s no timeouts or downs. It’s free flowing,” said captain and junior back Charlie Sullivan.

“There’s a similar ball [to a football], and you want to drive down the field the same way you do in football, go all the way down into the try zone, which is similar to an end zone in football. The difference is you can only pass backwards,” explained freshman back Rick Tamez. “I hadn’t really played rugby before, so at my first practice I was really nervous, but the older guys were really welcoming and helped me learn the game, and I love it now.”

Rugby’s growing popularity on campus over years led to the I-AA promotion, but with GURFC’s jump in division came a jump in the skill of their opponents, many of which are treated as varsity teams by their schools, a status that comes with resources.

“We’re facing an uphill battle here. We’re going against schools that have their own beautiful fields with access whenever they want. They’re getting donations for equipment, and funding from the school… everything we get is from our own dues,” said club president and junior forward Andrew Van Hoek.

GURFC practices two nights a week, two hours a night on Cooper Field (which also serves as their home pitch), but does not have access to the newly constructed Thompson Athletic Center or the varsity athletic training staff.

According to Head Coach Scott Zavrel, training has become much more difficult since the closing of Kehoe Field, the club and intramural field located on the roof of Yates Field House. It was closed indefinitely at the beginning of 2016 due to the poor conditions of the artificial turf surface. While GURFC used to practice four days a week, twice on Cooper Field and twice on Kehoe, training time is now limited to the two days on Cooper.

Nevertheless, the team is striving to operate as professionally as possible.

“We’re not attached to the athletic department, but that’s not going to prevent us from conducting business accordingly,” Zavrel said. “We’re teaching it like a varsity sport.” Zavrel works with six assistant coaches to prepare the team for competition.

“People are getting a lot more serious about the team,” Sullivan said.

Even as a club sport, the team serves as a draw for high schoolers considering Georgetown. Sullivan and Van Hoek played rugby at Fordham Prep in the Bronx, New York and came to Georgetown at least in part because of GURFC. Sullivan chose GURFC over NCAA Division III soccer.

Sophomore back Alexander Hersov, from Johannesburg, South Africa, began playing rugby when he was five. At 13, he joined the team at Wellington College in Crowthorne, Berkshire, England, as well as the London Scottish RFC.

“I wouldn’t have gone to a school without a serious program,” Hersov said. “I reached out to the coaches beforehand and cut applications to schools with programs that didn’t meet my requirements.”

The higher level of play has also required an adjustment period. During the fall fifteens season, the A-side went 1-7, although their sole victory came over traditional powerhouse University of Virginia.

This offseason, GURFC is emphasizing hitting the weight room. The team was composed of smaller players than most of their opponents and plagued by injuries, both problems that are addressed with strength training.

But while spring is a developmental period for fifteens, the sevens season is just beginning.  Here, the team has high hopes. The lack of size which disadvantaged them in fifteens matches is actually a boon for the faster pace of sevens competition.

“We’re a very good sevens team. We want to go to the [Collegiate Rugby Championship] this year,” Van Hoek said. The team certainly has the talent. In the fall, Goff Rugby Report named Van Hoek one of its top 50 forwards, and Sullivan one of its top 50 backs in Division I-AA.

Preparations for the spring are already well under way. On Tuesday evening, the team spent its two hours on Cooper at a near-continuous sprint. Practice ran like clockwork: catch, pass, tackle, repeat.

Sevens play kicks off on Feb. 18 with a conference tournament in Salisbury, Maryland. Other highlights of the season include a trip to Las Vegas, Nevada for the Las Vegas Invitational, a collegiate tournament that coincides with the USA Sevens international tournament, and with luck, a trip to the national championship.