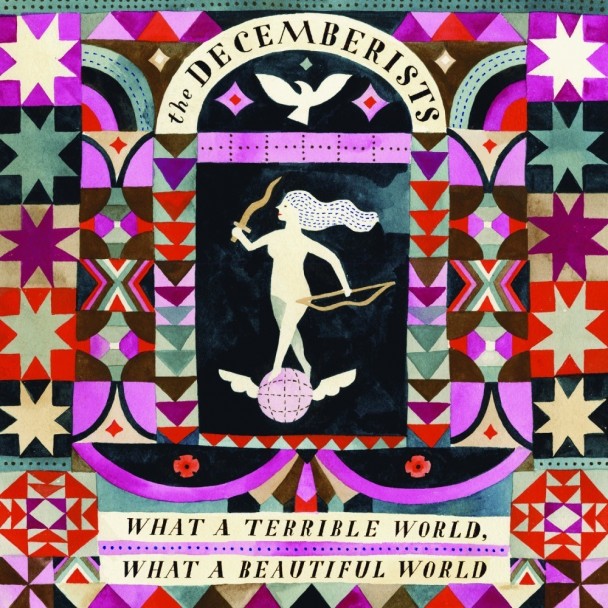 There are few bands that can be compared to R.E.M., the Smiths, and Neil Young through the lense of folk music. The Decemberists have released a number of hit songs of the years, including the very popular “Down by the Water.” The band’s new album, What A Terrible World, What A Beautiful World, sends a moderately successful product to listeners. The album is filled with passionate lyrics and amusing folk instrumentals, yet the Decemberists fall victim to the pitfalls of musical monotony on several occasions throughout their newest release.

Some of the album’s most successful tracks sacrifice the band’s folk-oriented genre. Tracks like “Philomena” take up indie surf rock for a more beachy vibe while others like “Better Not Wake the Baby” utilize an assertive bluegrass element mixed with a somewhat celtic-rock style undertone. This unexpected spectrum of sound is truly something interesting and innovative.

What is most impressive is the effect of new genre experimentation on the band’s natural talent for thought-provoking, poetic lyrics. “Till the Water’s All Long Gone,” blends extremely subtle synth with a moody, introspective, blues guitar to lyrics like “Love was I to lose you My tender rose My limber rose My slender loving daughter.” These artists flaunt their ability to demonstrate love, loss, and thought through their words. However, since poetry can only carry a song so far, many other musical elements must be considered.

Brevity is the soul of… well music that people can actually enjoy all the way through. The Decemberists are most successful when this mantra is maintained, for there are many great songs on this album. They simply cease to be enjoyable when the songs are overlong. “Lake Song” consists of beautifully poetic lyrics that add to an overall emotional image resembling the Smiths, yet it is simply too long. Once the chord progressions become predictable and the choruses are easily anticipated, the inherent enjoyability of the song vanishes.

This idea even carries over into the stylistic repetition. Although “12/17/12” is an enjoyable folk track, it bears so much of a resemblance to other folk tracks on the album, and this makes it difficult to appreciate as a work. Nonetheless, these difficulties do not overshadow the Decemberists’ successes. The band should undoubtedly invest more time in exploring the new styles they discovered on this album.