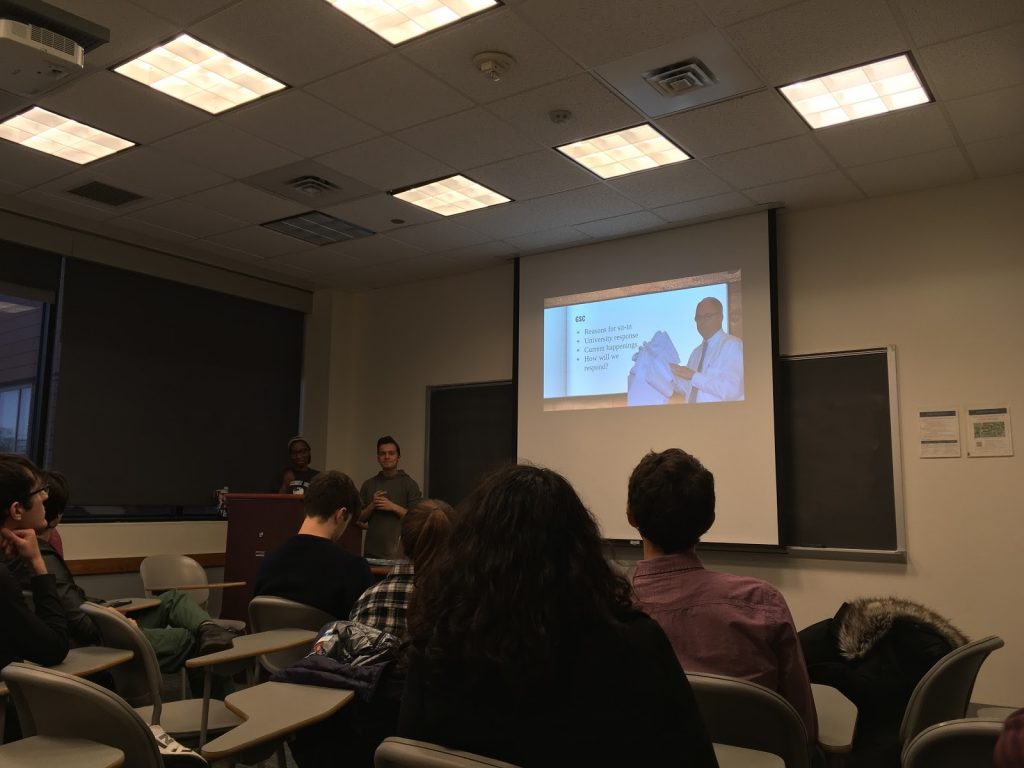 The newly-formed Georgetown chapter of the Democratic Socialists of America (DSA) held their first meeting on Feb. 11, where co-chairs Andrew Adams (NHS ‘20) and Jordan Brown (COL ‘20) discussed the group’s mission and plans for the semester.

While they acknowledged the presence of groups like the Georgetown Solidarity Committee (GSC) that share their views on workers’ rights and other socialist issues, they said that there is still a need for an all-encompassing socialist group on campus. Several of the students at the meeting were previously involved in the Georgetown chapter of New Students for a Democratic Society (New SDS), but Brown, who was also involved in New SDS, said that everyone agreed that a merger between the DSA and New SDS made the most sense for their goals.

“Georgetown kind of has a void of a general leftist organization,” Brown said. “I think DSA is a great place to start.”

Democratic socialism aims to decrease the power of corporations and of money in politics while advocating for the rights of the working class. Brown doubts that DSA will hold events with Georgetown University College Democrats but is not opposed to it.

“I hope for DSA to show the Georgetown community that there’s more than just Democrat and Republican,” Brown said. “The two party system in America is a farce, honestly, that’s just my belief…That binary does not allow for other beliefs to come into play.”

The Georgetown DSA chapter has already started planning events, and is helping out with the “1000 Pizzas” fundraiser in which Manny & Olgas will give 1000 pizzas to the Georgetown community to distribute to the homeless, in return for the purchase of 1000 pizzas. They hope to hold an “Ice Cream Social-ist” event, and want to fundraise to become dues-paying members for the national DSA.

“As of now, we are focused on resistance to the current administration and resistance to oppression in all its forms,” Brown said.

Adams thinks that President Donald Trump has been inspiring more people to be involved in the socialist movement in America.

“With the election of Donald Trump, young people are realizing that not only are these dire circumstances, but that this is an amazing opportunity,” Adams said. “We can capitalize on this moment, we can get people involved, and we can get people active.”

One of the students who came to the meeting, Chelsea Hernandez (SFS ‘20), said that she came because she is involved in other groups with Adams and Brown but also felt that this is an important time for democratic socialism to have a presence on campus.

“Because this organization isn’t necessarily partisan it’s really important because it builds dialogue around issues,” Hernandez said. “It’s a way for everyone to come together and to share ideas…and [it’s] building solidarity among people who want to make change.”