In this interview, the Voice sat down with GUSA Executive Candidates Kamar Mack (COL ‘19) and Jessica Andino (COL ‘18) as they described what their plans for “A Fresh GUSA”. The interview has been condensed for clarity.

The Voice: I’m just going to start by giving you guys the chance to tell me why you decided to run. Walk me through the process of putting the ticket together, and why you did it.

Jessica Andino: When I was thinking about running, one of the important things for me is the Undocumented Student Inclusivity Team. That’s why I joined GUSA in the first place. I wanted the next administration to preserve that, and I advocated for more representation of the students of color into GUSA, and that’s one of the things that got me motivated for running in the first place…GUSA is the institution that connects students to administrators. I want that to be in every policy and policy department that we have.

Kamar Mack: Building off of that, Jessica and I had very similar visions of how we can improve GUSA and how we can improve Georgetown. We want to make sure that everything GUSA does is efficient and impactful. We want to engage student organizations more so that there are no disconnects between initiatives. If you look at everything GUSA advocates for, there’s an existing student organization that is doing that work. We want to make sure that GUSA isn’t reinventing the wheel but rather is understanding what these organizations want to see. That’s also going to help with transparency, which is another big goal of ours. [Students]…have no clue how to access the resources that GUSA has to offer. That’s something that we want to change from an institutional standpoint.

If you look at the big issues that get me and Jessica fired up about how we want to improve Georgetown, the first one that we want to focus on is affordability. It doesn’t matter what income background you come from, Georgetown is getting more and more expensive for everyone…It’s not like we can just wave our magic wand and make tuition go down, but there are a lot of things that we can do to push back against these hikes that have been higher than we think they could have been…That means pushing the university to allocate resources more efficiently. That’s things like informing the student body on how we can preserve energy. Focusing on entrepreneurship so that Georgetown startups can donate money back to the endowment. We look at affordability very holistically.

TV: What issue is most important to your campaign? Is it the affordability you just talked about?

JA: Well, there’s three things that we’re focusing on: College affordability, student health, and entrepreneurship. Kamar touched a little bit on college affordability. One of the reasons that we chose student health is because it affects every student. It doesn’t have to be physical. It also encompasses mental health, and we want to put an emphasis on that. If you go to the student health center, most of the time people don’t have the best experience there, and we want to improve students’ experiences and their access to the resources. Making sure that there aren’t any cost barriers that keeps people from accessing these resources.

For mental health, personally, when I came my freshman year, academics took a toll on my mental health. I improved it through my own habits, but if mental health wouldn’t be such a stigmatized issue, students would take more advantage of the opportunities available. This is why I feel very strongly about student health.

One of the models that we want to bring is one that resembles undocumented student inclusivity. When I was in my position, I reached out to UndocuHoyas and Hoyas for Immigrant Rights, and we brought students in to voice their opinions to administration. That’s one of the things that we found effective. Once you have a lot of students advocating for these issues to administration, the administration is more receptive to address those issues.

We’re envisioning these and calling them policy coalitions. We would work collaboratively with other student leaders on campus to talk with administration.

KM: I think your question really hits at a priority that we have. With all of our goals, we like to have concrete steps. There are short term things that we like to look at right out of the gate, and some things that we know will affect Georgetown long-term…If you look at our entrepreneurship platform, there are things that we want to get into place for this coming spring and next school year. But also, this will have benefits for ten to fifteen years. If we’re pumping out 10 to 15 viable strong startups per year, that’s going to do a lot for our endowment.

What’s great is that Georgetown already has that talent. If you look at all of those organizations on campus. Look at the Corp. Look at all these clubs. They’re all student-run. In my mind, I think we have the potential to be the best school for entrepreneurship in the country.

TV: Something we’re asking everybody is to critique the previous administration. It’s been a little less than a year that those guys have been in charge, what worked well? What didn’t work well for them?

KM: One thing that I would say has worked well for them is that they have been able to do a lot in terms of master planning. That was the big job of their administration, because the campus plan was under negotiation…I think they negotiated the campus plan really well. They protected our right to live off campus for a year. That was a big win. They saved Brown House for a year. That was a big win. I think they handled that really well.

One thing I personally will say as a critique of their administration is the way that they have approached issues of diversity. One thing that I would like to see is a GUSA that doesn’t stop at identity and doesn’t say, “Oh, well you are a black student, therefore you must know every issue of the black community.”

A white student who has gone to every single BSA event may have a very strong understanding of the issues that are salient to the black community.

I 100% do not believe that Enushe and Chris tokenize people. I do not believe that at all, but I will say that Jessica and I want to approach diversity by engaging different communities and making sure that every community is represented in GUSA, which will then bring more of the descriptive diversity that we want.

TV: Something you guys have mentioned a lot is the entrepreneurial/ startup culture Why is that so important to you guys? What about that specifically?

KM: We need more Georgetown students to be able to launch these ideas, and one of the reasons why it’s one of our main planks is that there is so much room for growth. If you look at something like dining, there’s a lot that we want to do for dining, but we just signed a dining contract. The relationship with Aramark is pretty strong. They had a Dining Open House, which is not something that they do. If you look at something like dining on campus, there’s not as much room for improvement as an area like entrepreneurship. A lot of things need to happen, and a lot of things need to happen soon if we want to get to the level that we can be.

TV: What snack are you bringing to the debate?

KM: Snack of choice? I’m going to bring Trail Mix, but I’m going to pick the raisins out, because raisins are my least favorite food on this Earth. 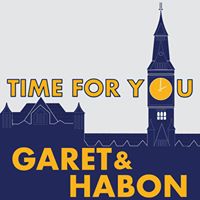 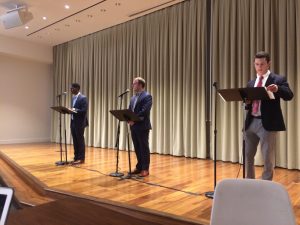