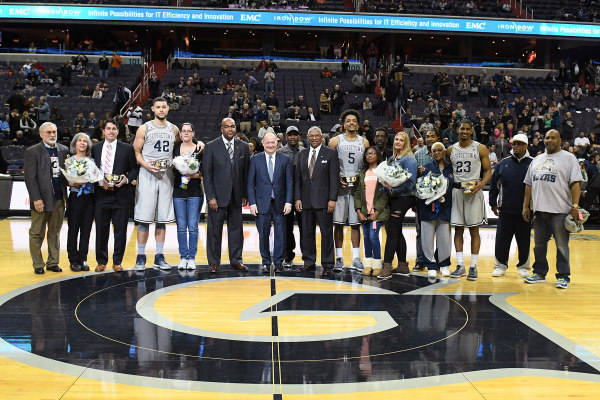 The Georgetown men’s basketball team (14-17, 5-13 Big East) was unable to contain the balanced scoring of No. 2 Villanova (28-3, 15-3 Big East) on Senior Day at the Verizon Center, falling to the Wildcats by a final score of 81-55. Georgetown was led by graduate student guard Rodney Pryor’s 21 points and seven rebounds. Villanova utilized the three-pronged attack of senior guard Josh Hart, senior forward Kris Jenkins, and sophomore guard Jalen Brunson, who scored 21, 19, and 17 points, respectively. Hart added six rebounds and four assists in the victory.

The loss is Georgetown’s worst home defeat to Villanova since the 1949-50 season, when the Hoyas lost to the Wildcats by 28 points. Georgetown has finished the season with its most conference losses in program history. The loss solidified Georgetown’s first back-to-back losing seasons since 1971-72 and 1972-73. Villanova finished conference play with its worst record since the formulation of the new Big East, but are still regular season champions. In each of the previous three seasons, the Wildcats finished with a 16-2 conference mark.

Georgetown’s first half offense relied exclusively on Pryor, who was hot from the opening tip. The graduate student scored 11 straight points, nine of which came from behind the arc, for the Hoyas in the span of six minutes to open the half. His third three-pointer of the game put the Blue and Gray up by two, 13-11, with 12:54 remaining in the half. A layup from junior guard L.J. Peak gave Georgetown a four point lead a minute later. Hart immediately responded with a three-pointer of his own.

Over the next ten minutes, Villanova unleashed a 27-8 run, which included two three-point field goals from Hart. Georgetown was plagued by foul trouble and constant turnovers during this stretch. The Hoyas committed 11 turnovers in the half, compared to just five from the Wildcats. Peak, who is second on the team in scoring per game, played just 11 minutes in the half after picking up three early fouls.

“(The turnovers) killed us,” said Georgetown Head Coach John Thompson III. “You can’t have careless turnovers against a good offensive team like that.”

The Blue and Gray were able to cut the Villanova lead down to 10 points by the intermission after a quick 5-0 run in the final minute of play. Senior forward Reggie Cameron, Jr. made a deep three-pointer over the Villanova defense as the buzzer sounded to end the period, capping the scoring at 38-30. Heading into the locker room, Pryor had scored 13 points, but the next closest Hoya, sophomore center Jessie Govan, had scored just five. Villanova, meanwhile, had five players score five or more points in the first half, including nine points from both Jenkins and Hart.

To open the second half, both teams struggled to score from the field. Georgetown, however, used five made free throws to cut the Villanova lead down to just four, 39-35, with 16:42 to play. The teams exchanged baskets for the following four minutes, but the game remained a single-digit affair the much of this period. A jump shot from sophomore forward Marcus Derrickson at the 10:00 mark made it just a six point game, 49-43, in favor of the Wildcats.

Over the next four minutes and 52 seconds, Villanova went on a 16-4 run, to open up their largest lead of the game to that point, 65-47. The run was aided by two consecutive three-pointers from Hart, which Georgetown was unable to recover from.

“Our defense disappeared,” Thompson said. “What really stands out to me is those two three-pointers from Hart… He’s a worker. I’m not sure there’s anyone in the country who plays as hard as he does.”

Georgetown was forced to play pressure defense in an attempt to close the deficit, but Villanova countered with quick ball movement, hot shooting, and backdoor cuts to snap any hopes of a comeback.

Georgetown committed 20 turnovers in the game, which is the second time in three games the team has committed 20 or more. Villanova managed 19 points off of these turnovers and scored 22 points in the paint compared to Georgetown’s six. The Wildcats outscored the Hoyas in fastbreak points, 12-0.

When Thompson was asked about his reaction to the recent noise surrounding the future of the program, Georgetown Sports Information asked that all questions from the press be related to the game.

Georgetown will now head to New York City for the Big East Tournament. The team will play on Wednesday night in the first round against St. John’s (13-18, 7-11 Big East) at 7:00 pm.

“We go in with a clean slate. We need to win four games,” said Pryor. Should the Hoyas win the Tournament, they would be guaranteed a spot in the NCAA Tournament. 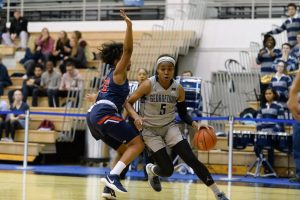