The Trump family’s ties to Georgetown

On a rainy day in January just four miles from Georgetown’s Hilltop, Donald Trump took the oath of office to become the 45th President of the United States. He was surrounded by a number of former Hoyas, and two months later, these Hoyas have continued to serve the nation in the new administration

While Trump himself attended the University of Pennsylvania’s Wharton School of Business, two of his children and many of his staff have attended Georgetown. His second son, Eric Trump (MSB ‘06), graduated with a degree in finance and management.

Eric Trump also serves as a member of Georgetown’s Business, Society and Public Policy Initiative (BSPPI) advisory board. The MSB launched the initiative in October 2014 to create a forum between leaders in the business and policy realms with teachers and students of the school.

“The initiative provides students, as well as business and political leaders and the general public, a greater understanding of the challenges facing corporations. More broadly, it will provide a nonpartisan, global venue to address critical business issues of the day,” the BSPPI website reads.

Because the board does not control any university funds, Eric can continue to serve on the advisory board even after his father’s election, according to James Moore, the managing director of the BSPPI and one of Eric Trump’s former professors. “The BSPPI board of advisors is just that – a board of advisors.  It is not a board with fiduciary responsibility,” Moore wrote in an email to the Voice. “He, like other members of the board, will be working with me to provide advice and appropriate support to the work we are doing on behalf of both the business school and the university.”

At the Republican National Convention last July, Eric Trump met with members of the College Republicans, for a breakfast at the convention. “His generosity in granting students this opportunity is an example of a Hoya serving other Hoyas, and we hope he keeps his alma mater in mind should a similar opportunity arise for our fellow students to learn more about the political world,” Christian Paz (COL ‘19), vice president of the Georgetown University College Republicans wrote in an email to the Voice.

The president’s daughter, Ivanka Trump, was a student in the MSB as well, but she transferred after two years to Penn’s Wharton School of Business, where she graduated in 2004.

Outside of his family, some members of President Trump’s staff are also Georgetown alumni. His former campaign chairman, Paul Manafort (MSB ‘71, LAW ‘74), graduated with a degree in business administration in 1971, and from Georgetown Law just three years later.

In December 2016, a group of 173 current students and recent graduates of the Master of Science in Foreign Service program published an open letter to Bannon in the Voice. They asked that Bannon stay true to the values of the School of Foreign Service and the greater Georgetown community.

“Since its founding in 1919, Georgetown University’s School of Foreign Service has been committed not only to international engagement, but to an ethical global community founded on respect for the rights and inherent dignity of every individual,” the letter reads. “We hope you can be a voice for ethical global engagement, in the spirit of our Georgetown community.”

University spokesperson Rachel Pugh wrote in an email to the Voice that the university has a long history of alumni serving in the top spots of the nation.

“Georgetown produces dedicated public servants and we’re honored to have a number of alumni serve during each Administration,” Pugh wrote.

Meredith Forsyth (SFS ‘19), chair of Georgetown University College Democrats executive board, wrote in an email to the Voice that the students and faculty of the university have a new responsibility to live out the university’s Jesuit values to show that alumni like Bannon, the former executive of the right-wing Breitbart News and a leader of the “alt-right” movement, are not representative of the Georgetown community as a whole.

“It is the onus of both students and faculty of Georgetown to demonstrate that Bannon’s and Trump’s actions are not reflective of true Hoya values, such as women and men for others and cura personalis,” wrote Forsyth. “We have a special and weighty responsibility that requires us to be bold in denouncing and resisting the rhetoric and actions of these alumni.”

Paz also commented on the Hoyas in the new administration, but provided neither criticism nor praise for the alumni.

“Georgetown is renown for its fantastic political and business education. We are aware of Mr. Bannon’s connection to Georgetown through a graduate school extension program. We have no other comment regarding the president’s strategist,” Paz wrote in an email to the Voice.

In a Q&A with Eric Trump, released in the BSPPI March 2015 newsletter, the president’s son reflected on how his choice to attend the university has affected his career after graduating.

“Georgetown and the McDonough School of Business are amazing institutions,” said Trump. “I could not have picked a better university and business school to have prepared me for the business world.” 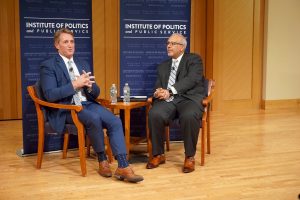 This is what Tiffany Trump typically eats in a day

[…] May of 2017, news broke that Trump would be following in a learned family tradition by attending law school at Georgetown University — the same grad school attended by President Trump’s second son, […]

[…] May of 2017, news broke that Trump would be following in a learned family tradition by attending law school at Georgetown University — the same grad school attended by President Trump’s second son, […]