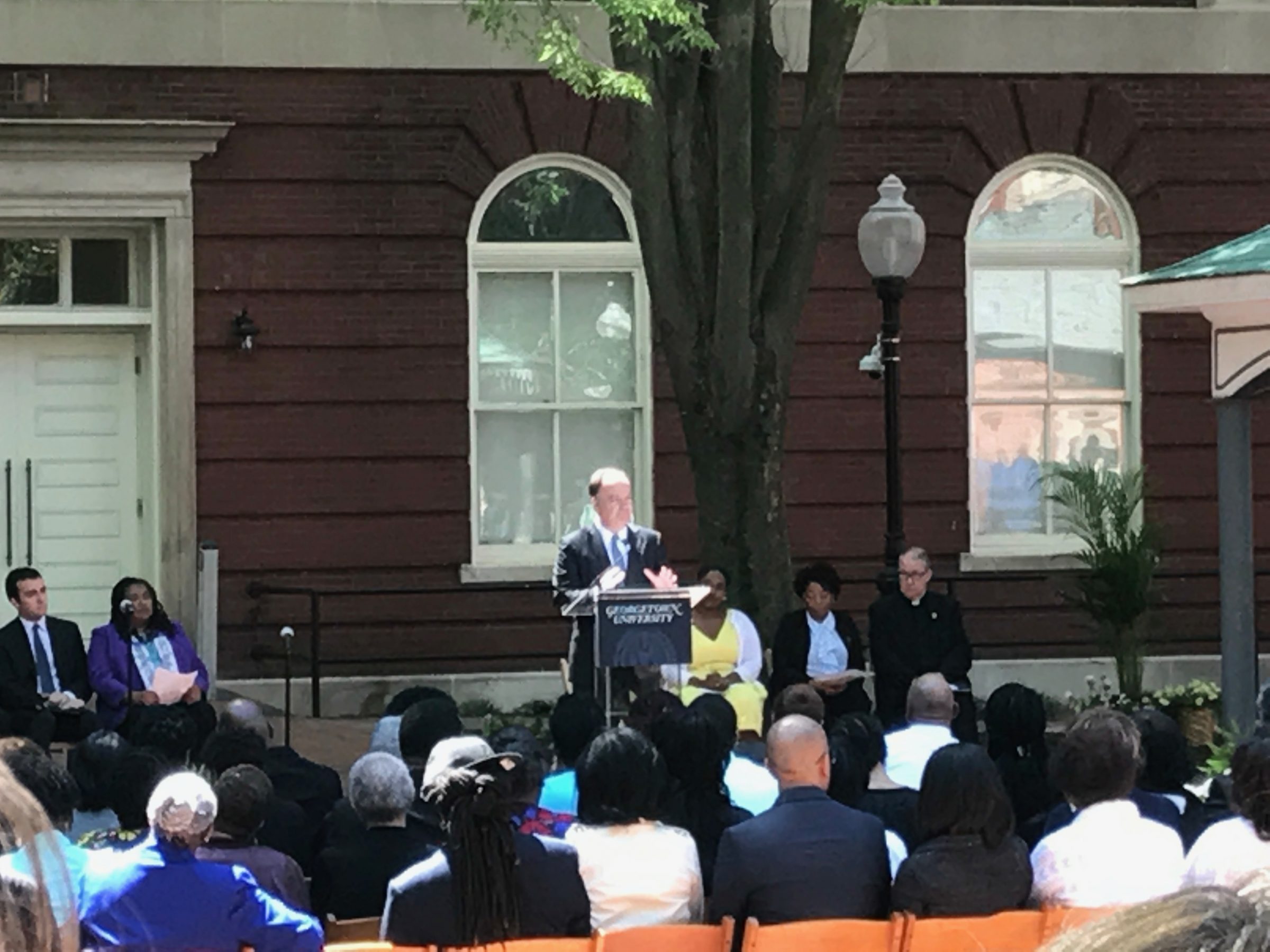 Georgetown University renamed Freedom Hall and Remembrance Hall to Isaac Hawkins Hall and Anne Marie Becraft Hall to commemorate the 272 slaves sold by the university in 1838. To celebrate the dedication, the university held the Liturgy of Remembrance, Contrition, and Hope, welcoming descendants of the 272 slaves to Gaston Hall and Dahlgren Quadrangle for a religious service and celebration on April 18.

University President John DeGioia welcomed guests and attendees to the dedication ceremony in Dahlgren Quadrangle, where he announced the new and permanent name of the building formerly known as Freedom Hall. The speakers included Ayodele Aruleba (C’17), Connor Maytnier (C’17), and professor Marcia Chatelain of the Working Group on Slavery, Memory, and Reconciliation, Karran Harper Royal, the executive director of the GU272 Descendants Association, and Jessica Tilson, a descendant of the Hawkins, Hill, Scott, Butler, and Diggs family lines.

The descendants of the 272 slaves participated directly in leading the liturgy by reading passages and excerpts, making remarks, and by reading intercessions. Jeremy Alexander, descendant of the Mahoney family line, read the Intercessions for Hope, which outlined the intentions of the reconciliation process. “May a commitment to those pushed aside and forgotten be renewed, may a sense of personal accountability for their struggles abide, and may the light of love radiate out and heal abiding wounds of our nation,” Alexander said.

Tilson, a microbiology student from Baton Rouge, Louisiana, spoke on the two disparate roles that Georgetown University has played in her life. Tilson told the story of her two premature children, one who passed away, and one born with the same condition who survived survived due to advances in medical research from Georgetown University. “The same institution that sold my ancestors is the same institution that has finally found a cure for the deadly disease that had taken my son’s life and spared my daughter,” Tilson said.

The past two years have been marked by an impetus to reconcile Georgetown’s past transgressions and to remember the victims of slavery. To begin the reconciliation process, the Working Group on Slavery, Memory, and Reconciliation, which DeGioia established in 2015, recommended that the university rename Mulledy and McSherry Hall, two buildings previously named for the Jesuit priests involved in the 1838 sale. In late 2015, Georgetown University temporarily renamed these buildings Freedom Hall and Remembrance Hall.

Isaac Hawkins was the first slave listed on the 1838 sale document, and is recognized in honor of all 272 slaves. Anne Marie Becraft, known religiously as Sister Mary Aloysius, founded in Georgetown one of Washington’s first schools for black girls in the 1820s. ”Renaming Remembrance Hall after Anne Marie Becraft offers recognition… of her heroic efforts on behalf of the oppressed under the noses of the white administration… on our campus who could readily conceive of her, her family, and her community as chattel,” the working group read in a statement.

The renaming and dedication is the first step in the process of reconciliation. The university has expressed preliminary plans to do more, including direct engagement with the descendants of the 272 slaves. The university will also grant preferred admissions status for the descendants of the 272 slaves, which means that descendants will have the same level of consideration as applicants whose family members attended or work at Georgetown.