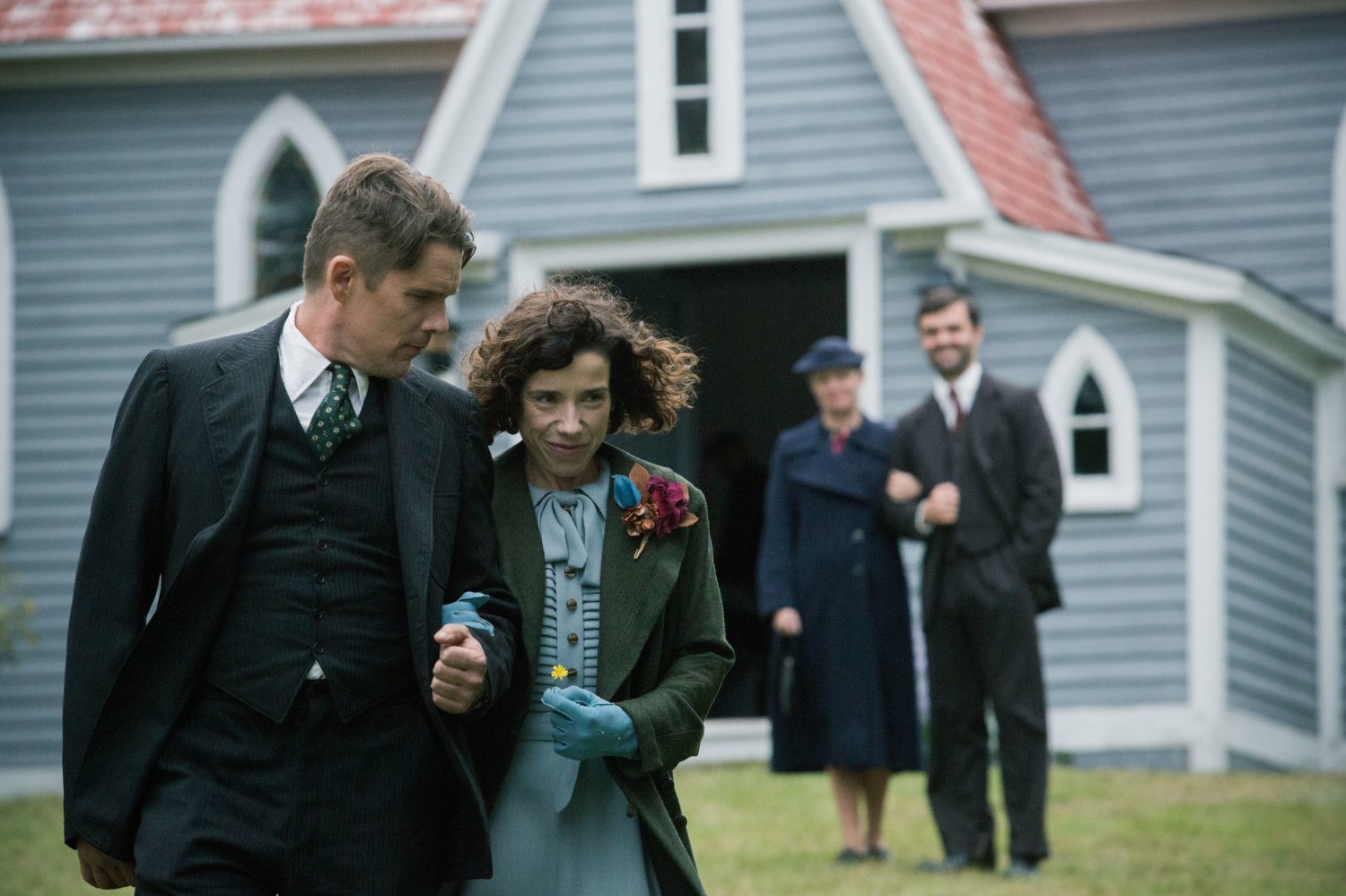 Maudie begins with a close up between a painting and an artist. A small woman paints flowers and smiles in delight at her talent as a title card introduces her as “Maudie.” Maud Lewis (Sally Hawkins,) born in 1903, was a Canadian folk artist crippled from an early age by arthritis. Despite her affliction, Lewis found a passion for painting early in life, and in her later years, her paintings caught the attention of fans around the world. Maudie tells the life story of Maud and her relationship with her husband Everette (Ethan Hawke). The film is carried by the talents of Hawke and Hawkins. The natural filming locations, background folk music, and simple dialogue softly delivered by Hawkins, gives the two-hander film a beautiful quaintness.

Crippled by her arthritis, Maud walks with a limp. She has lived through years of isolation and has a quiet personality, making her an outsider to the town around her. One day, Maud reaches a breaking point. She becomes tired of being treated as a child by her aunt who takes care of her and her brother who has had enough of her. Maud leaves her town to work as a housemaid. She becomes employed by Everette Lewis, a hot-tempered, socially isolated bachelor whose home is a car ride away from town. Maudie follows Maud and Everette’s relationship as they struggle to find common ground. Maud starts off unsure in her new independence but is steadfast in her quest to make the arrangement work, and Everette’s aggressive colors shine through early on. As time passes, however, the pair finds a beautiful, simple commonality .

Scenic Nova Scotia is the backdrop of the story. Wide lens shots are used to establish the isolation of the Lewis’ home, as well as to highlight stunning natural landscapes. Rustic music compliments the slow feel of the countryside where Maud and Everette live. The result of these cinematographic efforts is a complete immersion in a different, old-fashioned time and culture.

The power of this film can be found in the relationship between Maud and Everette. Hawk delivers an impeccable performance, and Everette’s temper lays an unshakeable tension over the film. The core of Everette’s personality remains as his character develops, but Maud’s remarkable kindness changes him in subtle ways that adds charm to their later scenes. Sally Hawkins gives what will go down as the performance of her career as she becomes the painter whose art charmed a generation and whose name has since tragically been forgotten. She nails the mannerisms of the quiet, disabled woman and brings new life to the memory of Maud Lewis. What eventually exists between Maud and Everette is a rough love based on hard-earned mutual understanding. The message is simple: differences can be overcome.

There’s a gorgeousness to Maudie. Between the bites of tension and the charm of occasional sweetness, there’s a continuous old-fashioned feeling that is transportative. Maudie is a story  worth knowing and provides a powerful lesson about overcoming differences. The film may not reach a widespread audience, but there’s a profound beauty within this simple story that proves that a small film can be a great one.