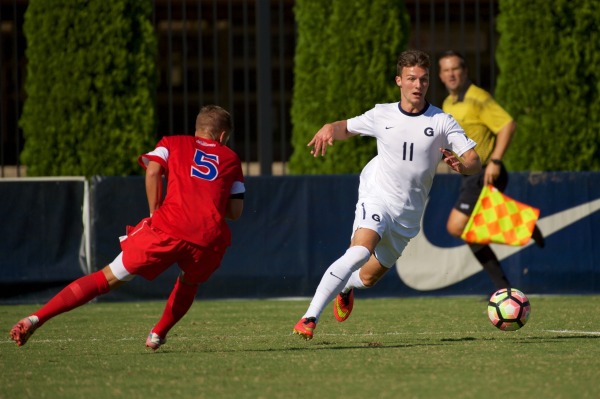 From the opening whistle, the Blue and Gray dominated possession, creating several scoring opportunities early in the game. Despite repeatedly cracking through the American defense, several crosses into the box narrowly missed the outstretched feet of Georgetown’s attacking corp, resulting in no goals for the dominant side in the match’s beginning stages.

While Georgetown couldn’t find the back of the net for the first ten minutes of the game, a solo effort from Lochner broke the dry spell for the Hoyas in the game’s twelfth minute. Lochner received a pass near midfield and drove up the left-center of the pitch. Just as American senior goalkeeper Shaun Quinn came off his line to challenge Lochner, the junior slotted a left-footed shot into the top-right corner, giving Georgetown a well-deserved 1-0 lead.

Georgetown continued to dominate possession for the remainder of the half, thanks in large part to stout defending from both midfielders and defenders. The defense allowed just two American shots and did not surrender a corner kick in the first half.

Strong defense on one end of the field strengthened a relentless offensive attack on the other, and Achara added a goal to Georgetown’s tally in the 41st minute. The sophomore forward used his searing pace to outrun American defensemen to a ball played through by freshman forward Derek Dodson. Again, Quinn came off his line, but Achara maneuvered past him and slotted the ball into the empty net to give the Blue and Gray a two goal advantage just before halftime.

“It was awesome [to score],” Achara said after the game. “I haven’t scored in a long time. You know, I was out [with multiple injuries] last year. But, I think it’s exciting for me and for the team.”

The game slowed down significantly in the second half, with possession being much more balanced between the two sides. American doubled its shot total from the first half, while Georgetown managed just two shots in the period. American substituted Quinn at the half for sophomore goalkeeper John Mino, who recorded one save. For Georgetown, junior goalkeeper JT Marcinkowski, who competed in the U-20 World Cup for the United States earlier this year, saved three shots.

“JT didn’t have a whole lot to do today, which is always a nice sign,” Wiese said. “That’s always a good sign for a back four.”

At the end of the final 45 minutes, which featured 23 combined fouls, Georgetown remained on top to capture a previously-elusive season-opening win.

“It’s been a long time since we’ve won our opener. It just helps because if you lose your first game or your first pair of games, you’re always chasing your .500 record back to try to get yourself eligible for the postseason. So it’s nice to get that first win. Anytime you win on the road is great,” said Wiese.

The Hoyas have a quick turnaround, as they host Coastal Carolina on Monday at 1:00 pm. That game opens a three-game home stand for the Blue and Gray. 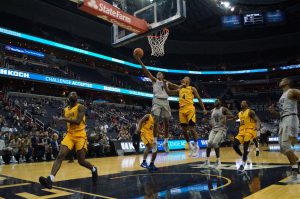 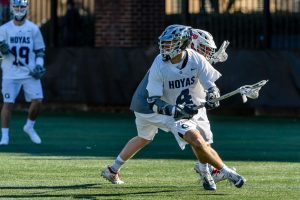