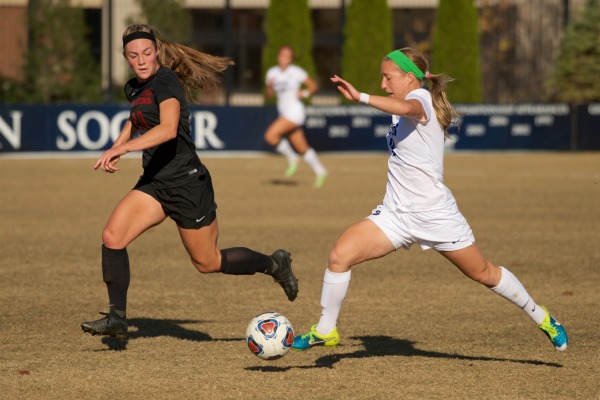 In a dominant performance, the No. 11 Georgetown Women’s soccer team (3-1, Big East) defeated the Loyola Maryland Greyhounds (1-3, Patriot League) by a score of 5-0 on Sunday afternoon at Shaw Field. Junior forward Caitlin Farrell scored two early goals for the Hoyas, who pressed their opponents throughout the game.

After struggling early in their past two games against George Washington and Delaware, Georgetown dominated possession from the first minute on. Starting strong was a point of emphasis for Head Coach Dave Nolan.

“When you play these kind of teams and they’re getting numbers behind the ball, you need to score early,” Nolan said. “We were able to get a couple early which opened up the game a little bit.”

The Hoyas created a number of early chances before Farrell opened the scoring by tapping in a cross from sophomore forward Casey Richards in the 14th minute. Less than five minutes later, Farrell added another, also assisted by Richards, after a beautiful turn around her defender in the box.

“Casey had a really nice cross,” Farrell said of the buildup to her second goal, “And then I felt the defender on my right shoulder so I thought I should turn. And then I just shot it and it went in.”

Senior midfielder Rachel Corboz added a third for the Hoyas in the 33rd minute, guiding a low cross from freshman midfielder Isabelle Fuchs into the back of the net.

Rather than rest on their laurels, Georgetown maintained its intensity into the second half.

“It’s definitely important to not step off the gas and keep going,” Farrell said. “You don’t want to give them a chance to get back in the game.”

The Hoyas were quick to add a fourth less than three minutes after the restart when sophomore midfielder Carson Nizialek pounced on a spilled cross from Loyola goalkeeper Sumer Rahe and poked the ball into the goal.

In the 89th minute, Corboz added her second of the game and Georgetown’s fifth by firing into the bottom corner from the penalty spot after senior midfielder Chloe Knott was brought down in the box.

Overall the Hoyas outshot Loyola 16-1, with the Greyhounds’ only chance of the game coming when Loyola defender Mary Corcoran headed a corner directly at Georgetown goalkeeper Arielle Schechtman.

Despite a commanding performance from the team, Nolan felt that the Hoyas have areas to improve before their next game against No. 1 ranked Stanford.

“We need to get a little bit better pressure on the ball. I thought there were times today when we got ourselves in trouble where we had numbers around the ball and we were too passive,” Nolan said. “Against a good team like Stanford, two passes will have them on the other side of the field 15 yards from goal, so we can’t afford to do that.”

“It’ll be tough going out there, playing in their home field with all their home fans,” Farrell said, “But we’re definitely up for it.” 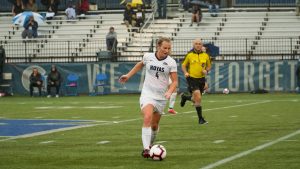 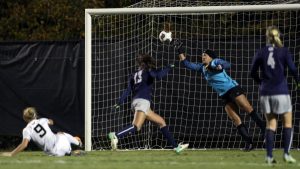 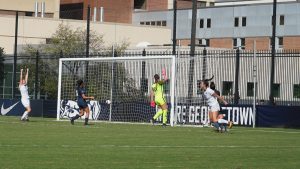