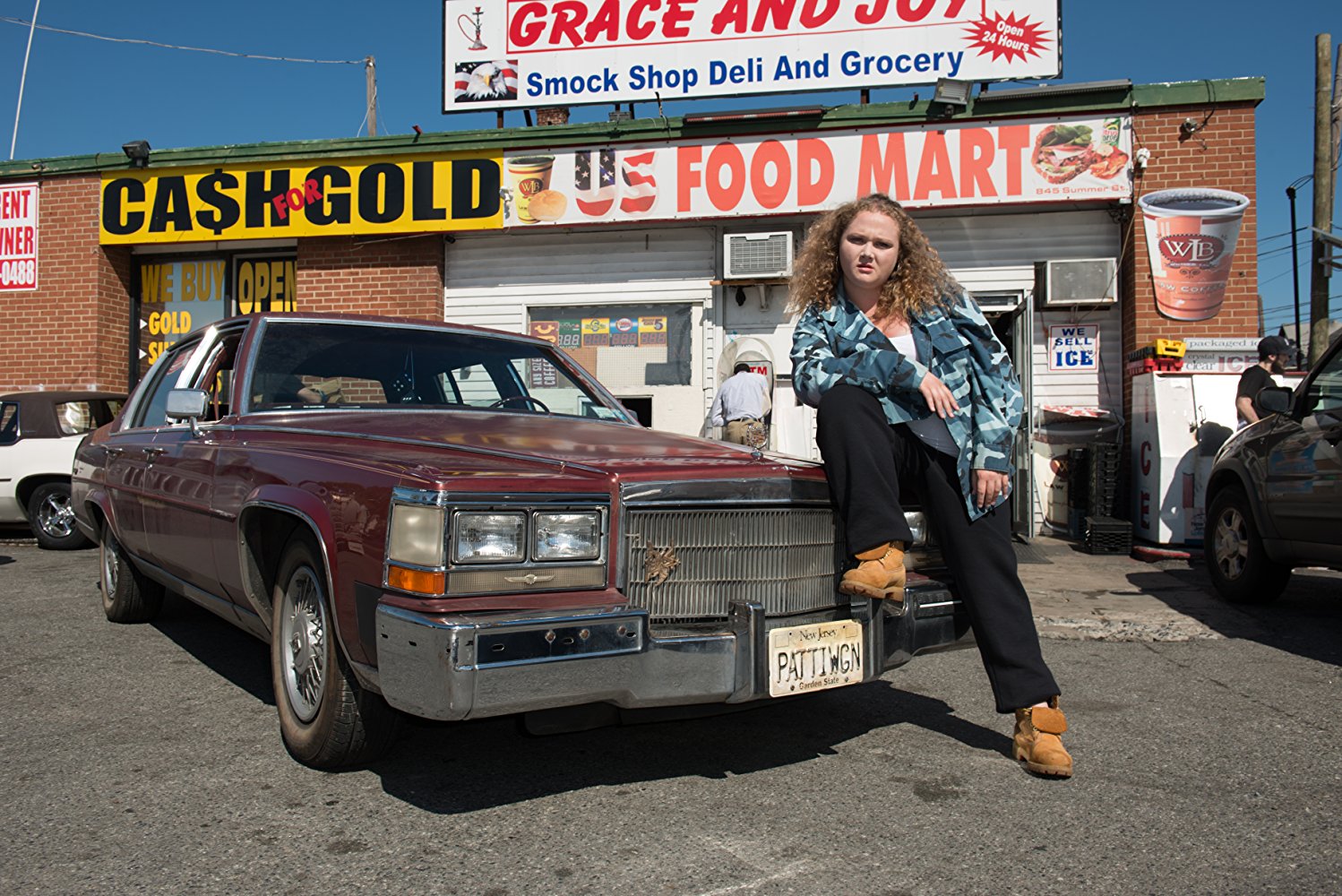 Fluorescent green light cuts through billowing smoke as producer O-Z (Sahr Ngaujah) introduces Patti (Danielle MacDonald) — Killa P — onstage. The crowd roars with approval as Patti ambles onstage. Suddenly, an alarm blares and Patti groggily comes into reality. We watch her morning routine as she makes her way through her small, dingy house, rapping “mylifeisfuckingawesome” into the bathroom mirror, and then checking in with her sick grandmother. Within the first few minutes of Patti Cake$, director Geremy Jasper gives us an intimate view of Patricia Dombrowski’s life, baring her hopes and dreams while introducing the less than ideal state of her home life.

Patti Cake$ is filmmaker and musician Jasper’s infectious and endearing directorial debut. In addition to directing, Jasper penned the screenplay, and wrote Patti’s original songs. The film is a rather inspiring, socially conscious, and self-aware look at Patti’s life in the first act, but falls in predictability in its second and third acts as viewers watch Patti surmount obstacles in typical underdog fashion.

Patti is a 23-year-old aspiring hip-hop artist working menial jobs to provide for her family in her northern New Jersey suburb. Her only support stems from her grandmother (Cathy Moriarty) and her best friend Hareesh (Siddharth Dhananjay). Everyone else seems to call her “Dumbo”, yelling the taunt outside of their car windows or in the middle of rap battles. People mock Patti for her weight and dismiss her dreams, with no one believing that she can make it in rap.

In an impromptu rap battle at the local gas station, Patti’s opponent does more than taunt, his rhymes alternating between sexual humiliation and fat-shaming. The film doesn’t shy away, instead registering real pain as MacDonald looks close to tears. It is a refreshingly real moment in a film that is ultimately lost to cliche. But Patti isn’t one to pity, and she gives back as good as she gets.

Patti finds a surrogate family, and the film succumbs to convention when she forms a band with Hareesh (whose nom de mic is Jheri) and a black punk rocker (Mamoudou Athie) who goes by Basterd. The band, called PBNJ, is rounded off by Patti’s grandmother, whose raspy voice provides an element of assurance for Patti and the group. After Patti and Jheri follow Basterd to his hidden shack in the woods behind the cemetery for the first time, we get a set of training montages, flashing back and forth between the group cutting tracks and Patti navigating the various obstacles of her life.

The best scenes come from Patti’s interactions with her alcoholic, embittered mother Barb (Bridget Everett), a has-been hair band crooner who can’t comprehend her daughter’s desire to rap. Everett, best known for her raunchy comedy and a real life cabaret act, seamlessly slips into the comical, pitiful role of Barb. Her own failed efforts to make it in the music industry cause her to lash out at Patti. A scene of Barb belting out karaoke at the local bar where Patti works immediately cuts to Patti holding back her hair as she pukes in the grimy bathroom is particularly painful. Barb can be pathetic, and sometimes is, but Everett portrays her as hyper-self-aware, revealing Barb’s genuine talent beneath the layers of pettiness.

Patti Cake$ could have gone wrong in many ways. The story of a white suburban blonde trying to be a hip-hop sensation has notes of cultural appropriation. But Jasper tackles them head-on. One character accuses Patti of being a “culture vulture.” In another scene, Patti asks her mother “Why don’t you act your age?” and Barb bristles and retorts “Why don’t you act your race?”

MacDonald’s performance is one of the film’s key strengths. Although Patti Cake$ is crisply edited and deftly shot, the film would fail to land without her. She portrays Patti’s fierce confidence and guarded defensiveness with ease and sincerity, and she delivers Jasper’s songs effortlessly. It’s impossible not to root for her.

The movie is filled with newcomers in addition to MacDonald. Both Dhananjay and Athie make their acting debuts, and complement MacDonald’s performance without being overshadowed by it.

Patti Cake$, however, fails to innovate after courting Sundance indie convention (the underdog finds a quirky makeshift family and together they overcome life’s obstacles) for most of its second and third acts. Its application of well-used underdog elements is, frankly, irritating. Patti butts head with her boss over valuing her art over her work. Someone close to Patti dies to push her to the edge and to give the film emotional gravitas. The “training” montages, slow motion power walks, and the moment when Patti looks up in the middle of a performance to see her mom coming in late to the shows all serve to make the film utterly unremarkable.

Patti Cake$ succeeds when it shows the intersection of different people and personalities in hip-hop and how African American vernacular and cultural signifiers have become a part of many people’s speech and art — it is particularly ironic when white characters say someone isn’t “street” enough. The film’s portrayal of the working-class Northeastern U.S. is compelling and the desire to throw oneself into music and into art to get away from the drudgery of low-paying jobs and ever-increasing bills is sharp and well-done.