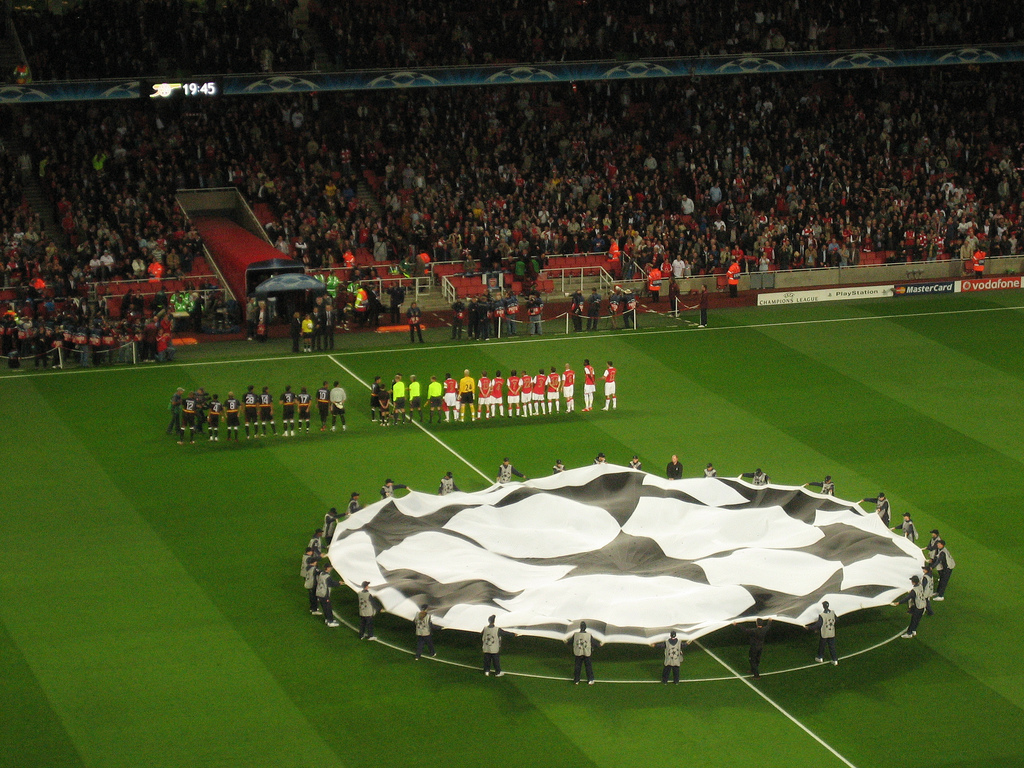 HERE COME THE VIOLINS!!!!! (You must play this music on repeat as you read this article. It just isn’t the same otherwise).

With matchday two in the UEFA Champions League coming up, we at Halftime take a look at the five must watch matches of the round. For the group tables, click here. For the full fixture list, click here.

Who can forget the two matches these teams brought us in last year’s group stage? Peter Bosz loves to entertain and with the wealth of attacking midfield options available for BvB feeding the freak of nature that is Pierre-Emerick Aubameyang, this isn’t a side that will sit back to try to absorb pressure from Los Merengues. On the other side, Zidane’s team is looking for an unprecedented Champions League three-peat. With the plethora of attacking talent that is Cristiano Ronaldo, man-bun Gareth Bale (significantly less clutch than short hair Gareth Bale), Marco Asensio, and Karim Benzema, Real isn’t a side that struggles for goals. And that doesn’t even mention Luka Modric, midfield perfection personified, Toni Kroos, or the god that is Keylor Navas against a point blank shot. Dortmund gets the nod because this match is in Germany.

Group E is all knotted up. Every team has one point to its name, though Liverpool had three in the bag until they, in classic Liverpool fashion, bottled it. Defender Joe Gomez even managed to get sent off in stoppage time. This match is captivating because it’s always fascinating to see whether or not Liverpool implode. We know that Jurgen Klopp’s side will push forward, and, assuming Philippe Coutinho’s reintegration into the side continues in Europe, have the potential to brush aside any defense in their path. But any team with Simon Mignolet doing making questionable decisions (just look at this whole penalty sequence with Jamie Vardy), especially given how suspect Joel Matip and Dejan Lovren look, can just as easily throw it all away. The match hinges on Coutinho. If he’s switched on, even with the limited minutes he likely sees, Liverpool wins.

With the Catalans rolling, a win in Lisbon could see the Blaugrana cruising into the knockout stages. Luis Suárez finally scored over the weekend, and Barça showed that they can win without Lionel Messi. The Argentine (please can we give Ray Hudson and beIn Sports the Champions League?) was shadowed for the whole match against Girona, but Barcelona found other ways to score besides just depending on the world’s most naturally gifted player. Coupled with Paulinho actually looking like a good player and having a real right back in Nelson Semedo (as gifted as Sergi Roberto is, the experiment with him at right back did not work), the Spanish side has looked unbeatable since the international break. Marc-Andre Ter Stegen will make the save that he needs to make, but who can resist watching Messi in full flight?

Let’s call it the Diego Costa derby. With the Spanish striker forcing a loan move back to Atlético through a self-imposed exile in Brazil (because Costa doesn’t give a fuck) Chelsea manager Antonio Conte finally relented. What makes this match more interesting is that Conte and Atlético manager Diego Simeone are the same person. They both feed off energy and walk animatedly though their respective technical areas, barking instructions to their players. Both are defensively solid and like to have their players buzzing around to create opportunities for the counter attack. Will it be good soccer to watch? There are certainly enough quality players. Antoine Griezmann, Yannick Carrasco, Koke, Saúl Ñíguez, Eden Hazard, Alvaro Morata, and Pedro all figure to feature. But while any of these players can produce silky play, this could also be a chess match between two teams that thrive on opponent’s mistakes. I’m leaning to that one. Set piece headers will probably produce goals. God knows Diego Godín scores those. But then there’s goalkeepers Jan Oblak and Thibaut Courtois. These teams are evenly matched.

Will Neymar and Edinson Cavani be petty on the field? Is Diego Forlán watching, ready to immediately pounce on Dani Alves again and call him Neymar’s bitch? So many questions and so much drama is brewing in Paris and we’re still in September. At least Kylian Mbappé seems to want to work hard. One thing PSG definitely has going for them though is that they’re mad. They were held to a goalless draw against now 12th place Montpellier, so if the attackers aren’t royally pissed off now, there’s nothing Unai Emery can do to get them to play. Bayern’s prospects are fairly normal. Robert Lewandowski is very very good, Thomas Müller will work hard, Arjen Robben still manages to cut in on his left foot (even though the entire world knows that’s exactly what he will do), Thiago is still sick, the back line is practically impenetrable, OH WAIT!! MANUEL NEUER HAS A BROKEN FOOT!! And with backup goalkeeper Sven Ulreich doing this, expect PSG to pepper his goal, especially in France.