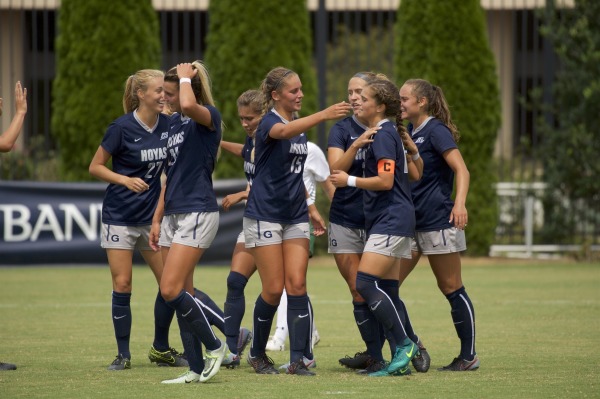 Seton Hall junior goalkeeper Laura Dramis was immediately busy with Nally directing an early header into the Dramis’s hands. The Hoyas found success with crosses, both from live play and set pieces. In the space of two minutes midway through the first half, junior forward Caitlin Farrell found sophomore forward/midfielder Paula Germino-Watnick unmarked in the box, then senior midfielder Rachel Corboz found Farrell unmarked from a corner. Both headers flew safely into Dramis’ hands.

“The qualities we have of some of our attacking players is to get wide and try to get behind them and get crosses either in the air to the back post or to get closer to goal and then pull balls back to the penalty spot,” said Head Coach Dave Nolan. “On another day, we probably could’ve had another two in the first half.”

Freshman midfielder Grace Nguyen and Carolan each had half chances at goal before Nally broke the deadlock two minutes before halftime. Nally picked the ball up on the halfway line and drove down the right flank before cutting inside onto her left foot. After taking a touch inside, she then hit a shot that looped over Dramis’ head and nestled into the top corner to put Georgetown up 1-0.

“I’ve been working on that shot for a little bit with [Assistant Coach] Kristen [Meier],” said Nally. “I was hoping it would go in, and when it did, it was a nice little surprise.”

The Hoyas outshot the Pirates 14-1 in the first half but still looked to be moving in slow motion in the opening period.

“In the first half I felt that we were probably at 60 percent. We just weren’t as sharp as we needed to be,” said Nolan. “I said that if we could get it up another gear, we could score three or four.”

Both sides had a goal disallowed for offside early in the second half. Farrell drove a cross into the box from the left that nestled into the far corner, but Germino-Watnick’s run and dummy from an offside position impeded Dramis’ view of the ball. On the other end, Seton Hall’s forwards were slow to keep up with the Georgetown defenders as they pushed up out of the box after a free kick, so the thumping volley that followed didn’t count.

Shortly thereafter, Carolan doubled the Hoyas’ advantage in the 55th minute. Farrell easily turned her defender on the right wing before floating a cross between the two Seton Hall center backs. Carolan took her chance with aplomb, directing the free header from six yards out into the corner past the diving Dramis for her third goal in the last two games.

Less than a minute later, Corboz hit an inswinging corner from the right side for Pak to attack at the far post. The midfielder’s bullet header made the score, 3-0 Georgetown, and suddenly the Hoyas smelled blood in the water.

Georgetown continued to press the Pirates as Nolan made subs to rest his key players. In the 81st minute, Georgetown scored two goals in quick succession once again through Menta. Her first was an interception from a loose backpass to poke the ball past Dramis. The second came forty seconds later after a through ball from Nguyen put her in behind the defense. Dramis made the first save, but Menta got her own rebound and slotted into the gaping net.

“I scored one goal in the beginning of the season, but that was a long time ago,” said Menta. “It was nice to go out there and score some goals and it makes me feel like myself again.”

“They know at some point they’re going to have to come chase it a little bit,” said Nolan. “We got the goals in key moments. I think it was an efficient performance but it certainly wasn’t our best.”

Georgetown looks for its fifth straight victory when it hosts Creighton (2-9-1, 0-3-0 Big East) on Thursday afternoon. Kickoff is slated for 3:00 p.m. 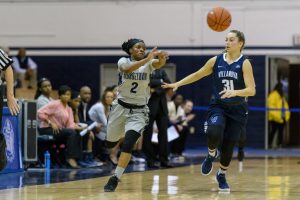 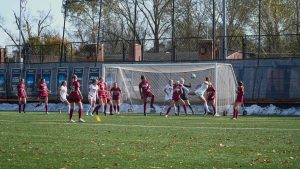 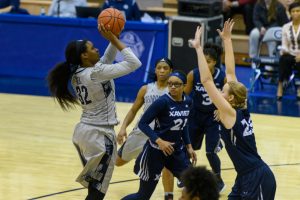