Every year, the Baseball Writers’ Association of America votes for the Cy Young Award, given to the best pitcher of each league during the regular season. Over the years, there has been a lot of controversy over what exactly constitutes as “better.” Can a relief pitcher win the award? What if a pitcher’s season was cut short due to injury, but he was the best pitcher while he was healthy? Which statistics really matter? I take a look at all these questions as well as submitting my own ballot as to who should win the Cy Young in each league.

This is a two horse race between Corey Kluber of the Indians and Chris Sale of the Red Sox. Both pitchers are among the league leaders in basically every relevant pitching category. They hold the top two spots in ERA, WHIP, H/9 (hits per 9 innings), BB/9, K/9, strikeouts, and BB/K ratio. The one big statistic where they do not share the top two spots is WAR, or wins above replacement. I’m not fully bought by sabermetrics, but I do think they hold some significance and validity. Among AL pitchers, Kluber is first and Sale is third, but Kluber has an 8.0 WAR while Sale has just 6.0, which is a pretty big gap. Furthermore, in every statistical category I mentioned before, besides strikeouts and K/9, Kluber holds the lead. As for ERA and WHIP, Kluber leads by a large margin (0.65 and .101 respectively).

Now, Sale does have one huge advantage going for him, and that is strikeout numbers. Sale leads the league with a ridiculous 308 strikeouts, 43 more than Kluber. On top of that, he averages 12.933 strikeouts per 9 innings, 1.220 more than Kluber. These numbers are insane, but they would not earn Sale a vote from me. There’s not much better to watch than Chris Sale racking up 14 strikeouts over seven innings. It’s awesome. But what if Sale gives up three runs over those eight innings? If you ask me, I’d rather have seven scoreless from Kluber with six strikeouts. I don’t care much about how a pitcher gets his outs as long as he gets them.

Bottom line, both pitchers had outstanding years. Kluber was just a little better all-around, so he’d have my vote.

As for the National League, the race is a little more interesting. There are three realistic contenders, Clayton Kershaw of the Dodgers and Max Scherzer and Stephen Strasburg of the Nationals. This is an intriguing conversation because Kershaw has arguably pitched much better than the Nationals’ duo, but threw only 175 innings over 27 starts.

Kershaw was leading the NL Cy Young race until July 23, when he exited the game with a back injury. He missed over a month, but was just as dominant after he returned from the disabled list. He won the ERA title by a decent margin of 0.2 earned runs over Scherzer. Kershaw even eclipsed 200 strikeouts despite his injury, and nears the top of most other relevant categories. Scherzer, however, was there for the Nationals all year long, logging 31 total starts (though his postseason status is now in jeopardy). Kershaw may have been better over a shorter season, but Scherzer had a greater impact. If Kershaw didn’t have the back injury, he may have made four or five more starts, but who knows what would have happened in those starts. Pitching a full season comes with plenty of wear and tear, so that could result in decreased effectiveness in a handful more games.

My fellow Dodger fans will ask why haven’t I discussed that Kershaw has the most wins in the National League, despite making four fewer starts than Scherzer. The relevance of a pitcher’s win-loss record has become a hot topic over the last decade, and I think it’s an irrelevant statistic. A starting pitcher’s record does relate to how well he pitches, but it also has a lot to do with his team’s offense and bullpen. A starter can throw a complete game and give up one run, and still lose if his offense can’t muster a run. He can also get a win by giving up five runs over five innings if his offense bails him out. Or, a pitcher can leave the game in line for the win, only for his bullpen to blow the lead.

We have to remember that, while both the Dodgers and Nationals have two of the best offenses in the majors, their bullpens differ greatly. The Dodgers bullpen had the 4th best ERA this year, while the Nationals had the 23rd, and they were even worse before they picked up Sean Doolittle, Brandon Kintzler, and Ryan Madson at the deadline. Three times this year, Scherzer left the game with the lead only for the bullpen to blow it and leave him with a no-decision. To further my point, Jason Vargas of the Royals lead his league with 18 wins, despite a mediocre 4.16 ERA. Win-loss records just have too many other variables to factor into the Cy Young discussion.

Strasburg, who sustained an elbow injury around the same time, is in a similar situation to Kershaw. He ended up making only 28 starts, though he put up numbers just as impressive as the other two.

Ultimately, season-long durability is just as important as effectiveness. Because of his full season, Scherzer gets my vote even though some of his numbers aren’t as impressive as Kershaw’s.

If not Sale or Kershaw, Dodger and Sox fans will still ask about their closers Kenley Jansen and Craig Kimbrel. Both closers have had amazing seasons. Jansen recorded 41 saves with a 1.32 ERA while allowing just seven (yes, you read that right) walks all season, and Kimbrel had an equally impressive 35 saves and 1.43 ERA. But there’s a reason why the MLB has Reliever of the Year awards for each league, and that is because relief pitchers simply don’t have as much of an impact as starters. The ability to shut the game down in late innings is essential for any championship team, but that wouldn’t matter if a starting pitcher can’t preserve the game for six or seven innings. Jansen and Kimbrel faced 258 and 254 batters this year, respectively. To put that in perspective, Kluber faced 777 batters this year. It’s not even close. These closers were dominant this year, but we can’t compare their impact to the likes of Kluber and Scherzer.

If anyone with a BBWAA ballot vote is reading this, I hope I gave a convincing argument. If not, I won’t complain if you vote for that guy Kershaw and solidify his already Hall of Fame resume.

The MLB Roundup: As the Fat Lady Sings 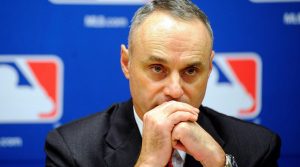