The Georgetown field hockey team (9-9, 1-5 Big East) ended their season on Saturday evening with a win over La Salle (8-8, 3-5 A-10), by a score of 5-4. Senior midfielder Joanna Hawkins, and freshman forwards Cami Osborne and Nell Van Schaak all scored for the Hoyas, while the Explorers were led by goals from freshman forward Rialee Allen, junior forward Mackenzie Karcher, and senior midfielder April Stein.

The first half of the game featured an offensive explosion from both teams. The scoring began in the third minute on a Georgetown penalty corner when Hawkins scored with a shot off of a rebound from La Salle sophomore goalie Emma Provost’s pads.

In the 14th minute, the Explorers were able to capitalize on a fast break with a goal from Allen, who was assisted by senior forward Jess Hoffman. The tie did not last long, however, as Georgetown immediately drew another corner. Junior midfielder Helena Masiello received the ball and sent a shot that deflected off of Van Schaak’s stick into the goal to put the Hoyas up 2-1. Four minutes later Osborne scored on a pass from freshman forward Ali Cronin to put the Hoyas ahead 3-1 and give Osborne her 12th goal on the season, making her just the second Hoya to ever do so.

The scoring did not stop there as Allen scored again for the Explorers, only to be followed a minute later by a second Hawkins goal, bringing the score to 4-2. With three minutes remaining in the first half Karcher was able to convert a shot on a pass from junior midfielder Logan Oh to bring the Explorers within one.

The second half began in similar fashion to the first, with an Explorer’s goal from Stein, who squeezed the ball past Georgetown junior goalie Chloe Verwiel and into the corner to even the match.

From then on the game was back and forth with both teams generating numerous chances. With ten minutes remaining, Van Schaak tallied again for the Hoyas to put Georgetown ahead 5-4 and seal the victory for the Hoyas.

The Hoyas outshot the Explorers 29 to 12 and had 15 corners to La Salle’s three.

“We penetrated their circle over 40 times on Saturday night. We were able to capitalize off set pieces which was a plus for us and something we had been lacking in past games. So that was good to see,” Soares said.

This game marked the conclusion of the Hoyas season, who failed to make the Big East Tournament with a 1-5 conference record.

“We will spend a large portion of the offseason focusing on how to take care of the small details,”  Soares said, “because if we can do the small things well then we’ll be able to do the big things well down the line.”

She highlighted the work of the freshman class, who contributed greatly to this Hoyas team.

“We brought in a freshmen class that: Cami [Osborne] had 26 points on the season, Nell [Van Schaak] had 15, Jax [van der Veen]had 12, Ali [Cronin] had 15, Anna Farley had 18. So that’s a lot of points from five freshmen, and we’ll look to see them continue to progress and develop as they continue their careers here on the Hilltop.” 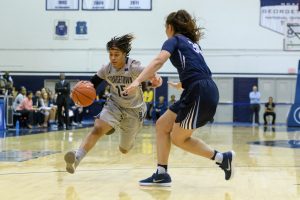 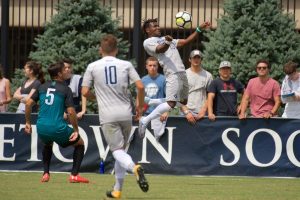