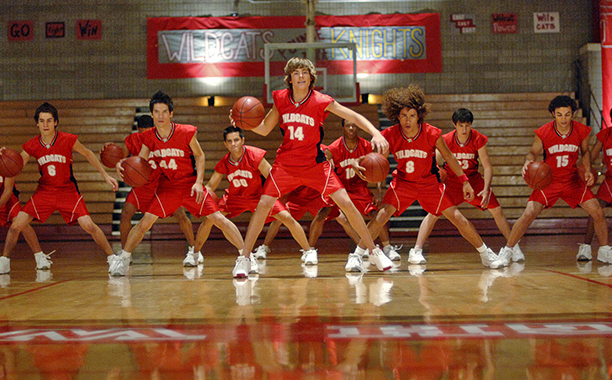 The Georgetown basketball season is about to begin, and the spirit of the season is upon us. Basketball is packed with energy, excitement, emotion, and trials—which translate beautifully to the silver screen. The film industry—and Disney especially, as it turns out—has delivered; the Voice presents our thoughts on the best of the best.

This documentary follows the stories of two young black men growing up in the inner-city of Chicago, William Gates and Arthur Agee, who dream of one day playing in the NBA. Although basketball is the thread that connects all of the issues tackled in the film, it is not just a basketball movie. Woven in the stories of these two young men are the issues of drug use, welfare, education, family dynamics, the success narrative sold to young black men, and the tension between dreams and reality. This movie is so good that its lack of an Oscar nomination caused the Academy to change the process through which it nominates documentaries. It is that good. I will concede, however, that this movie is extremely long. Clocking in at just under three hours, taking the time to sit and watch can be somewhat of an undertaking, but a worthwhile one nonetheless.

This documentary isn’t about basketball specifically, but it’s the embodiment of the the “basketball” I have always known. I lived the first 14 years of my life in Cleveland, the city that failed to win, well, anything, for 52 years. It was the only city with three major sports teams to have failed so severely for so long. My dad, born in Cleveland the year after the Browns’ 1964 championship victory, suffered the misfortune of enduring the entire drought without even the nostalgia of a Cleveland victory.

The original version of this film provides an in-depth history of Cleveland’s losses and near-misses, the close relation between the sports industry, the city’s economic struggles, and its place in the world. Shortly after the Cleveland Cavaliers’ 2016 NBA championship victory, the film was re-released with an extended ending, documenting Cleveland’s sudden change of fate. Watching the film, and the extended segment in particular, reignited the emotions I had experienced in the moments after that fateful seventh game: pride, release, excitement, awe. For anyone who has ever questioned why Cleveland fans have stayed so loyal for so long, or why we will always love our city, or for anyone intrigued by the transcendental power of sports in a community, Believeland is a must-watch. You might even begin to respect Cleveland itself—maybe.

If anyone tries to tell you that High School Musical (2006) is not a basketball movie, they are wrong. The story is a simple one of two students from rival cliques in high school, Troy (Zac Efron) and Gabriella (Vanessa Hudgens), who find each other despite being in different social circles. Add some songs in there and you have a perfect musical about high school—a High School Musical.

But, this classic Disney Channel Original Movie isn’t just a musical; it’s a compelling sports movie. Troy Bolton goes through all the challenges that a typical star basketball player would in any basketball movie. Troy faces the pressure of living up to his dad, of the basketball coach’s expectations, of being the star of the team, and of having interests that lie outside of basketball. The song “Get’cha Head in The Game” is a perfect example of this. “Why am I feeling so wrong? / My head’s in the game, but my heart’s in the song,” Troy sings as his teammates dance around him on the court with basketballs.

And, just like any sports movie, there’s a big game to win at the end. There’s also a scholastic decathlon and callbacks for a musical, and that’s the beauty of High School Musical. It’s a basketball movie that’s also a musical and a teen rom-com. It’s got a lot of heart with an endearing message about doing what you love, even if it seems that the things you love contradict each other. And, yes, it has plenty of basketball as well.

The opening musical number of “Now or Never” is everything a basketball film should aspire to be. It’s an ode to teamwork and a ballad of finality—these 16 minutes are their final moments to represent East High on the court and they’ll be damned if it ain’t their finest. For our generation, the High School Musical films are classics (yes, they are). The final outing of this trilogy brought the angsty epic to the big screen with more cinematic choreography. Highlights include the Broadway-style Sharpay showcase “I Want It All” and the West Side Story-influenced junkyard frolic of “The Boys Are Back.” High School Musical 3 is among the most cinematic of our modern musicals, and brings to the forefront issues of choice and destiny. The question we all still find ourselves grappling with, of where our futures will take us, is at the heart of HSM3. Who doesn’t feel like Troy when he’s trapped in a spinning hallway during the powerful “Scream” number?

But anyone who wonders how all this is going to turn out has either not been paying attention or has forgotten that Disney is in the business of creating dreams. There’s so much formula to HSM that the FDA should license the franchise. But that’s perfectly all right. This series is intended to be good, clean, escapist fun for hard times. It is Dirty Dancing without the dirt, and it delivers by grounding the characters in relatable situations revolving around personal angst, the dichotomy between athletics and creativity, and the struggle of mapping out one’s future. After all, isn’t that what basketball is all about? We’re all in this together, we’ll face these struggles together, and we’ll prevail together.

Disney Channel Original movie and cinematic classic Full Court Miracle (2003) is a typical sports movie. Veteran actor Alex D. Linz (of Home Alone 3, Max Keeble’s Big Move) provides a gripping performance as Alex Schlotsky, a freshman at Philadelphia’s Hebrew Academy. When “Schlotz’s” basketball team flounders leading up to the Liberty Tournament, he turns to former UVA basketball star Lamont Carr to coach the team. Like most sports movies, it turns out Carr may be the reincarnation of Judah Maccabee, the hero of the Hanukkah story.

Schlotz goes on to fake a hospital internship, con his dean, pass his history test, save Carr from homelessness, and convince him to give up on his dream of playing in the NBA to permanently coach the Academy. Not bad for a 14-year-old. During the climax, Schlotz is in the finals when a storm causes a power outage, and the generator only has enough oil for a few more minutes of play…You see where this is going.

Director Stuart Gillard, this film is truly a mitzvah.

All 86 minutes are chock full of aha! moments for anyone who appreciates Irish culture—although, I can’t speak to how an Irish citizen would view the potato chip factory scenes. Still, this sports film ties basketball into the magic and wonder of an ancient Irish folklore tradition, a rare treat for an American industry that consistently overkills the proven profitable American genres. Gaelic sports make for the perfect frame for climactic tension in a sports movie, especially when paired with basketball.

In typical Disney fashion, Hoen concludes the adventure with a lesson. Sure, some might call a spontaneous rendition of “This Land is My Land” sung by families of diverse ethnic backgrounds a little campy. Well, call me a sucker. This Aesop-style moral hit home.

If you have 90 minutes, a basketball, and a magic Celtic coin, The Luck of the Irish is worth your time.