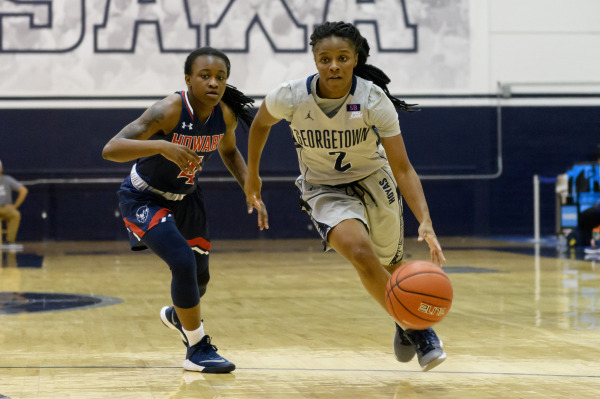 Coming off a tough loss to George Washington (2-3 Atlantic 10) last Sunday, the Georgetown women’s basketball team (2-1 Big East) travels to Nashville, Tennessee, for the Challenge in Music City, a three-day tournament beginning on Friday. Taking place in Nashville’s Municipal Auditorium, the round-robin style competition will showcase four Division I women’s basketball teams for the first time. The Hoyas will play Auburn (2-1 Southeastern Conference) at 8:30 PM on Friday, Chattanooga (2-3 Southern Conference) at 8:30 PM on Saturday, and Northwestern (4-0 Big Ten) at 3:30 PM on Sunday.

Georgetown will get its first chance this season to face teams that featured in last year’s NCAA tournament. Auburn and Chattanooga both made the tournament back in March, each losing in the first round.

Auburn, coached by former Georgetown head coach Terri Williams-Flournoy, began the season with a loss to Virginia Tech (5-0 ACC), but has won two straight games since then. The Tigers are led by junior forward Janiah McKay who has averaged 19.7 points per game to go along with 5 assists per game and 4.3 rebounds per game. Freshman forward Unique Thompson has also impressed early on, averaging a double-double coming into the tournament.

Chattanooga has had an up-and-down start to the season. The Mocs dropped their first three games but picked things up thereafter and come into Nashville on a two game winning streak. Senior guard Keiana Gilbert leads the team in scoring, averaging 14.4 points per game.

Northwestern may not have made the NCAA tournament last year, but it has gotten off to the best start of all four teams. The Wildcats remain undefeated at 4-0 and most recently defeated Santa Clara (1-3 West Coast) at home. They have four players averaging double digit scoring this season, including junior forward Pallas Kunaiyi-Akpanah who has also grabbed 12.3 rebounds per game.

For the Hoyas to succeed in Nashville, they will need to avoid the erratic offensive play that haunted them in the first half against George Washington. Senior forward Cynthia Petke and junior guard Dionna White will look to continue their hot starts to the season to take down these strong non-conference opponents. Petke, who was named to the Big East Weekly Honor Roll, is averaging 15 points and 14.3 rebounds per game. White leads the team in scoring and is second in the Big East with 20.3 points per game, while also grabbing a conference high 12 steals.