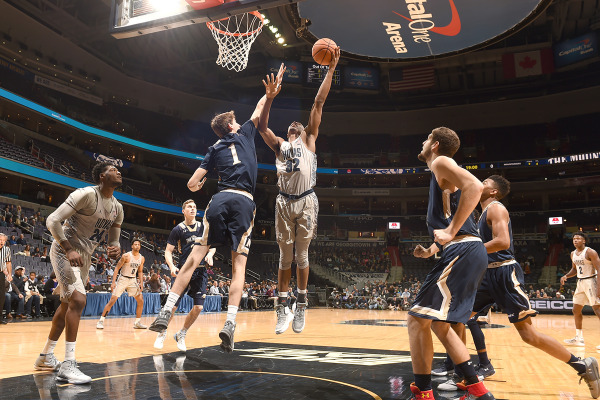 The Georgetown men’s basketball team (4-0, Big East) will return to Capital One Arena on Tuesday to take on the Maine Black Bears (1-5, American East) in attempt to keep its perfect season alive.

The Hoyas are coming off of a 82-76 win over Richmond (1-5, A-10) on Saturday. The Spiders provided Georgetown with its first real test of the season, but the Hoyas were able to scrape out the victory, as all five starters scored in double digits for the Blue and Gray. Junior forward Marcus Derrickson led the Hoyas with 16 points and nine rebounds, while senior guard Jonathan Mulmore added 15 points and eight assists.

The Black Bears are coming off of a win over Quinnipiac University (1-5, MAAC) after losing their first five games of the season. Maine will be led by 5-foot-11 senior guard Aaron Calixte, who averages 14.7 points per game this season.

As KenPom’s 334th ranked Division I team out of 351, the Black Bears should prove to be an easier task for the Hoyas than the Spiders.  Maine enters the game shooting .368 from the field and .302 from three, compared to the Hoyas who average .522 from the field and .471 from behind the arc.

Georgetown junior center Jessie Govan, who dominated in the Hoyas first three games, averaging 21 points and 14.3 rebounds per game, will look to return as a dominant factor, after scoring 14 points and grabbing six board against Richmond. Govan should command the paint and boards, as the Black Bears do not have anyone on their roster who compares to the 6-foot-10, 270-pound big man’s size.

Tipoff is scheduled for 8:30 p.m., and the game will be broadcasted on FS1. Follow @GUVoiceSports for game day updates and breaking news.