Georgetown Must Reckon With Bill Clinton’s Past 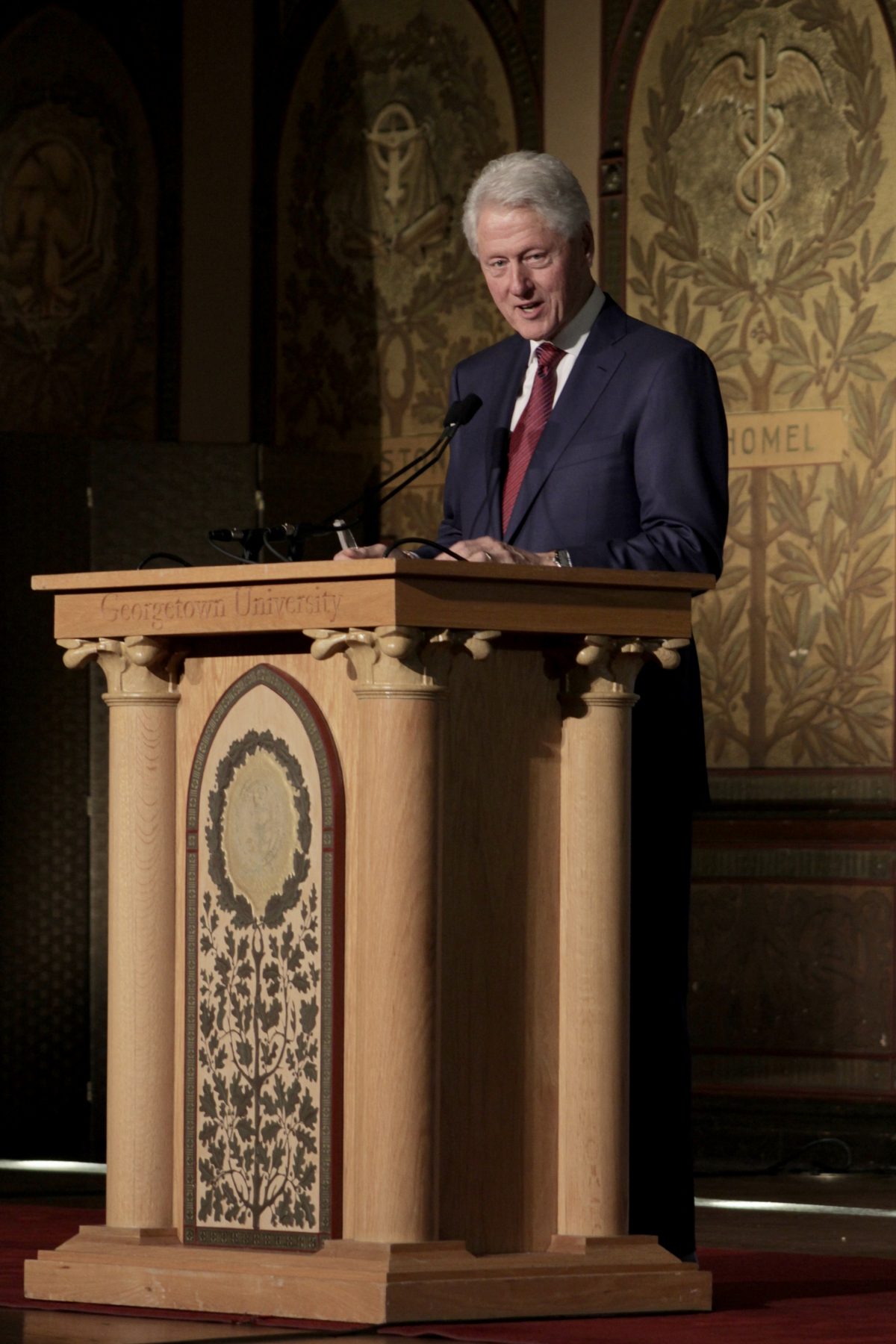 In the weeks since The New York Times and The New Yorker reported allegations of sexual assault against Harvey Weinstein, the floodgates have opened for similar accusations against powerful men in Hollywood and politics. Victims have come forth with accusations against Kevin Spacey, Louis C.K., Republican candidate for U.S. Senate Roy Moore, and Democratic Senator Al Franken, among others.

These controversies have sparked one of the largest conversations about sexual assault and sexual harassment in the United States since Anita Hill’s accusation against Justice Clarence Thomas in 1991. Since the allegations against Weinstein, women and men took to social media to share their own stories of sexual assault and harassment using the hashtag “#MeToo.” This movement has created what seems to be a watershed moment in America’s history with sexual assault. Now, more than ever, it seems as though victims are being believed as they share their stories, forcing a national reckoning over the reported behaviors of predatory men in power.

As the nation addresses its issues of sexual assault and harassment, this editorial board calls on Georgetown University administrators and students to do the same.

While not reported in recent years, accusations of sexual harassment, assault, and rape against Georgetown alumnus and former President Bill Clinton surfaced in the late 1990s. At the time, the three women who publicly accused Clinton of sexual assault were dismissed and victim-blamed by Democrats and feminists alike.

As an editorial board, we firmly believe and support survivors of sexual assault. We ask that the university do this as well by finally believing the women who accused Clinton of sex crimes and separating themselves from the former president. President DeGioia should write a letter to the university’s students and faculty stating that this campus is a safe space for survivors. In addition, we should not allow an accused sex offender to speak on campus. We recognize that we cannot ask the world to stop associating Clinton with Georgetown. However, the university can take steps to make it clear it does not and will not support Clinton in the future.

A separation from Georgetown’s most famous alumnus certainly won’t be easy, but it is morally imperative that the university demonstrate its refusal to tolerate sexual misconduct. If this campus wants to have a real and productive conversation about issues of sexual assault in the future, it cannot continue to ignore the accusations against Clinton and continue to invite him to speak on campus.

When allegations against Kevin Spacey were first reported, the university quietly took down a picture of him that hung in Healy Hall. Severing the relationship with Clinton cannot be done in the same way. Georgetown’s administration must publicly condemn the actions of Clinton and, by doing so, affirm its support for victims of sexual assault. This decision to separate Georgetown University from Clinton cannot be quiet or cowardly.

Earlier this month, GU Politics held a “Clinton 25” symposium on campus to celebrate the 25th anniversary of the election of former President Clinton, and he gave the keynote address to a tightly packed Gaston Hall. On Blue and Gray tours of campus, prospective students are shown Clinton’s freshman dorm. It is without doubt that Georgetown benefits from its association with Clinton, but it has benefited for far too long. It is important, now more than ever as the nation faces an opportunity to change how it addresses sexual assault and harassment, that Georgetown too makes the choice to hold perpetrators of sexual assault and harassment responsible for their actions.

While we ask that the administration reckon with accusations against Clinton and its relationship with him, we ask that the student body does the same. As we strive to have greater conversations about sexaul assault on campus, Georgetown students must keep in mind what figures they uphold and what they stand for. Waving cardboard cutouts of Clinton’s face at basketball games and camping out overnight to see Clinton speak in Gaston Hall fails to confront or condemn his wrongdoings.

Reckoning with the allegations against Clinton should be part of the larger conversation that students and campus organizations are having about sexual assault on campus. Solving the issue of sexual assault on college campuses will never happen from the top down. The problem can only be solved through student understanding and action. Students, along with the administration, must face these tough conversations and difficult decisions about what we want this campus to be and what people we want to represent it if we are ever going to see real change.

If we as a student body want this campus to be a safe space for all survivors, a campus that believes victims of assault, and a campus that refuses to tolerate sexual assault, sexual harassment, or violence of any kind, then we cannot continue to hold Clinton on a pedestal, and we ask that the university similarly cease to do so.