Mike Mussina Belongs in the Hall of Fame 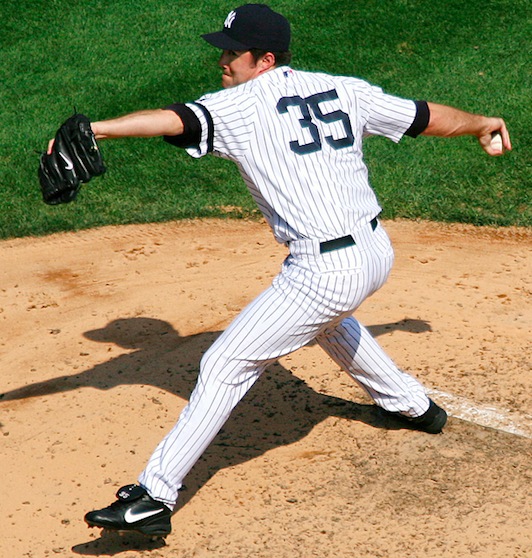 When Aaron Boone launched the first knuckleball he saw from Tim Wakefield into the left field stands to win Game 7 of the 2003 ALCS, he vaulted himself into Yankees lore for eternity. He also apparently put himself into the discussion for Yankees manager, but that’s a subject for a different article. If you ask a baseball fan today, there are one, maybe two things that they remember from that game: Boone’s home run, and Grady Little’s controversial decision to leave Pedro Martinez in to pitch through a Yankees rally. But neither of these iconic moments would have been possible if it weren’t for the clutch pitching of an unsung hero in his first career relief appearance.

In Tom Verducci’s “The Yankee Years,” Joe Torre spoke about how he had promised Mike Mussina that he wouldn’t be brought out of the bullpen in the middle of the inning after Mussina told Torre that he’d be available for Game 7. After staff ace Roger Clemens struggled over the first four innings, though, all bets were off. Down 4-0, with runners on the corners and nobody out, Torre had no choice but to go to Mussina to stop the bleeding. And stop the bleeding he did. He struck out Jason Varitek on three pitches. Then, on an 0 and 2 count, he induced a groundball double-play from the dangerous Johnny Damon. With six pitches, Mussina authored his signature Yankee moment.

Mike Mussina’s career was marked by “almosts.” He came one strike away from a perfect game in 2001, and he also came three outs away from a World Series win in the same year. There was always something elusive about Mussina’s career, something he was chasing. He has been on the Hall of Fame ballot for four years: in 2017, Mussina received 51.8 percent of the vote, in 2016, 43 percent, in 2015, 24.6 percent, and in 2014, 20.3 percent.One thing is clear, however: whether from a statistical angle, or from the context in which Mussina pitched, he undoubtedly belongs in Cooperstown.

The statistics speak for themselves. There’s Mussina’s 82.7 career WAR, the 19th-best number among qualifying pitchers since 1901. He has the 33rd best ERA+ in the same timeframe, along with having the 19th-most strikeouts, the second best strikeout-to-walk ratio, and seven Gold Gloves over the course of his career. He also finished in the top six for Cy Young award voting nine different times, finished his career with a 3.00 ERA in his World Series starts, and won at least 11 games in 17 straight seasons. It’s far too easy and unfair to write Mussina off as never having won a ring or a major pitching award. He was defined by his consistency.

Looking beyond the pure numbers tells an even more impressive story. Mussina pitched for the Baltimore Orioles from 1991-2000, and the New York Yankees from 2001-2008. Both of these teams played in the powerful AL East during the height of the steroid era. Mussina was able to author those remarkable statistics without resorting to cheating, further bolstering his case.. The only real moment where Mussina’s consistency waned was in the 2007 season, where he pitched to a career-high 5.15 ERA. But in 2008 he bounced back in style, reaching 20 wins for the first time in his career before retiring, becoming the first pitcher to retire after a 20-win season since Sandy Koufax did so in 1966.

Examining the whole body of work will reveal that Mussina’s successful playoff moments far outweigh his struggles. He outdueled Randy Johnson twice in the 1997 ALDS, which his Orioles won in four games, before recording an ALCS record 15 strikeouts in Game 3 of the 1997 ALCS, which his team lost (and then proceeded to lose the series four games to two). After arriving in New York, Mussina pitched brilliantly in the 2001 ALDS (more on that later) and the 2001 ALCS. In Game 1 of the World Series that year, he struggled, lasting only three innings. In Game 5, though, with the series tied, Mussina delivered eight strong innings, holding the Diamondbacks to two runs and keeping the Yankees in the game. His World Series form was perfected by 2003, when he held the Florida Marlins to one run over seven innings in Game 3, his final World Series appearance.

Mussina had a number of playoff games where he pitched well, only to see his team shut down. A matchup with Tim Wakefield in Game 4 of the 2003 ALCS saw Mussina receive a hard-fought 3-2 loss, and a matchup with Johan Santana in Game 1 of the 2004 ALDS saw Mussina’s seven inning effort wasted as the Yankees were shutout 2-0. And Mussina was one of the few to escape blame during the epic 2004 Yankee collapse in the ALCS. He took a perfect game into the 7th inning in Game 1, which the Yankees won, and then pitched six-plus innings of two-run ball in Game 5 to hand the bullpen a 4-2 lead. He was never quite the same after 2004, with a solid Game 1 start, a disastrous Game 5 start in the 2005 ALDS, and a decent seven inning, four-run performance in Game 2 of the 2006 ALDS, his final postseason start. His last postseason appearance came in Game 4 of the 2007 ALDS, where he had the unenviable task of cleaning up after Chien Ming-Wang’s horrendous start in which Wang gave up four runs in one-plus innings.

Perhaps the best indication that Mussina has been forever overlooked is his other shining moment in a Yankee uniform. During the 2001 ALDS, the Yankees dropped two games in a row to the Oakland Athletics and travelled to Oakland facing the impossible: no team that had lost two straight games at home during a five-game series had come back to win the series. Facing elimination in Game 3, the Yankees sent Mussina to the mound. He turned in a gem: seven shutout innings holding a 1-0 lead, sparking a three game comeback from the Yankees. Of course, his start isn’t remembered from that game. An obscure shortstop by the name of Derek Jeter turned in one of the unlikeliest defensive plays in history, relegating Mussina’s performance to the annals of history.

Mussina’s career has been a story of consistency that few other pitchers have rivaled in history, let alone during the peak of the steroid era. If baseball wants to address its checkered past with steroids in earnest, the least it can do is reward the players who played the game honestly and brilliantly. Mike Mussina belongs at the head of that pack, as he has more than earned his place in Cooperstown.