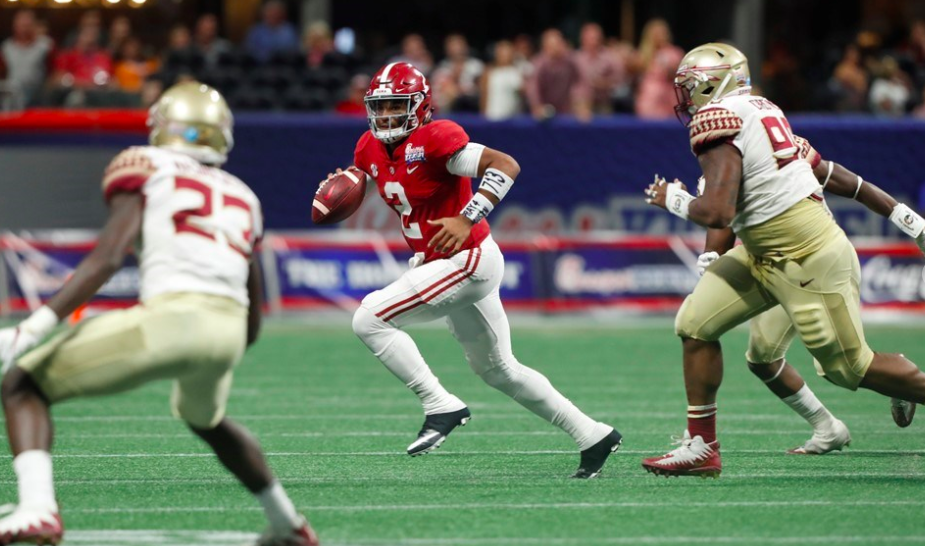 The people of Alabama are yelling ROLL TIDE once again as the Crimson Tide have won their fifth national championship in nine years. It seems these days that nothing could go wrong for Alabama. Year after year they play close to perfect football, make the playoffs, and give their opponents hell. Their head coach, Nick Saban, is one of the reasons they have managed to be this good in recent years. He is cunning, composed, and serious at all times. He genuinely cares about each and every one of his players individually, but always ends up doing what is best for the team. While enjoying the temporary satisfaction from his sixth natty, he will soon have to return to the humourless creature that is Nick Saban. It’s a tough life, but has proved to pay off. But before Saban can go back to developing his star players, he needs to decide who will be his starting quarterback next season. He has handled this problem before, but this time it’s different. If he makes the wrong decision, Alabama’s future could crumble.

Going into the final game of the 2017-2018 season, the ‘Bama community seemed like they knew what lay ahead. Despite being one of the younger players on the roster, 19-year old Sophomore Quarterback Jalen Hurts led his team to their second straight title game. Last season, Hurts decided not to redshirt in hopes that he would start as a true Freshman. Jake Coker had just graduated leaving the role of QB1 up for grabs. Hurts’ confidence and determination ultimately paid off when he beat out 5-star recruit Blake Barnett and Junior Cooper Bateman for the starting role. Unlike Coker, who had to wait until his Senior year to start, Hurts showed the Alabama faithful and Saban that he was naturally skilled and could beat out his older teammates. He has a decent arm, and can run better than most QBs, which is where he has found most of his success.

This fall, ‘Bama fans received yet another player to be excited about: Quarterback Tua Tagovailoa. When Tagovailoa was recruited by Alabama, everyone knew he was good, but they didn’t know if he was mature enough to take over Hurts’ job. Plus Hurts solidified his status in his first two years going 26-2 heading into the 2018 National Championship. That record includes wins against top 10 teams and victories in two semi final games. There is no doubt that Hurts can play. But when you look at his performance in big games, such as the 2017 final against Clemson, and this year’s Iron Bowl, not only has he lost, but he has looked like a completely different quarterback.

Hurts failure in games like these isn’t because he cracks under pressure or because his talent suddenly vanishes. It’s because he’s just not that good. I love Jalen and think he’s done a great job leading this Alabama team, but he’s not the next A.J. McCarron. He is a solid college player, but is not cut out for playing QB at a professional level. He started out as a double threat. He could throw well and his running game was phenomenal. But his biggest strength ended up being his biggest weakness. He started to rely on his run game too much. It pretty much went like this. Take the snap, drop back, look for Calvin Ridley, throw him a pass. But what about when Ridley was double covered? He would run. That was it. Hurts was a one-dimensional passer. If he couldn’t place the ball in Ridley’s arms, he wouldn’t place it in anyone’s but his own. Sure, he racked up a lot of rushing yards, but he also got sacked a lot. And eventually, teams caught on.

This year in the Iron Bowl, he had a lot of trouble throwing the ball and the result was a depleted Crimson offense. Two games later, in the National Championship, it got worse. Hurts started the first half but threw the ball only eight times. Of those passes, only three hit their intended destinations. His poor performance amounted to nothing as the Tide entered the locker rooms with a big, fat goose egg. Saban, unwilling to let history repeat itself, sent true Freshman Tagovailoa into the game and the momentum immediately switched. The rookie threw three touchdown passes and proved to be a solid scrambler as well. After Tagovailoa’s 41 yard bomb to DeVonta Smith in OT to win the game, I don’t think anyone had a doubt about who next year’s starter would be.

So what’s next for Hurts? Many people immediately suspected he would transfer, but a gracious “no ‘I’ in team” type interview seemed to show Hurts’ respect for his teammate and coach. I don’t think transferring is the best option for him, and I honestly don’t believe he will. If he can’t play quarterback at the college level, how does he expect to play in the NFL? The glory of the ring came with that subpar realization. That leaves him with two real options: he could try and fight to keep his spot or he could switch positions. The persistence of Hurts leads me to believe he will try and keep his job, but persistence will not be enough to beat out the Freshman phenom in Tagovailoa. The native Hawaiian is often called the next Marcus Mariota, who happens to currently be starting for the Tennessee Titans in the NFL playoffs. That’s going to be tough for Hurts to compete with. If he wants to ever see a shot at the NFL, he is better off following in the footsteps of Ohio State’s Braxton Miller. Miller suffered a shoulder injury during his Senior year, allowing redshirt Sophomore Cardale Jones to lead the team to a National Championship. After being permitted a medical redshirt for the next season and realizing that the competition was too much, Miller returned to Ohio State as a wildcat/wide receiver mix. Being incredibly athletic and fast, Miller shined in his new role and was drafted as a receiver by the Houston Texans.

Transforming into a wildcat/running back type threat is the only option that makes sense for Hurts. He can run like hell and break tackles like nobody’s business, but has serious trouble throwing the football. Having Hurts in the backfield could be huge for both him and ‘Bama next season, especially since RB Bo Scarbrough declared for the draft. And if he succeeds, he will have a shot at the NFL just like Miller. While Saban insists the quarterback competition is still undecided, most people know that Tagovailoa will prevail one way or the other. He displayed his cannon of an arm in the Championship and proved the doubters wrong about his age and maturity. Is it possible now that we could see both Hurts and Tagovailoa on the field together?

Teddy Carey Teddy is a junior and currently an Assistant Halftime Leisure Editor. He is an avid fan of Gaelic hurling and the state of Arkansas. In his free time, Teddy advocates for the raising of NBA hoops because the league is currently too easy.

Bruce Cassidy and the Sundance Kids
Falling back: Women’s basketball drops fourth straight after an 0-2 weekend