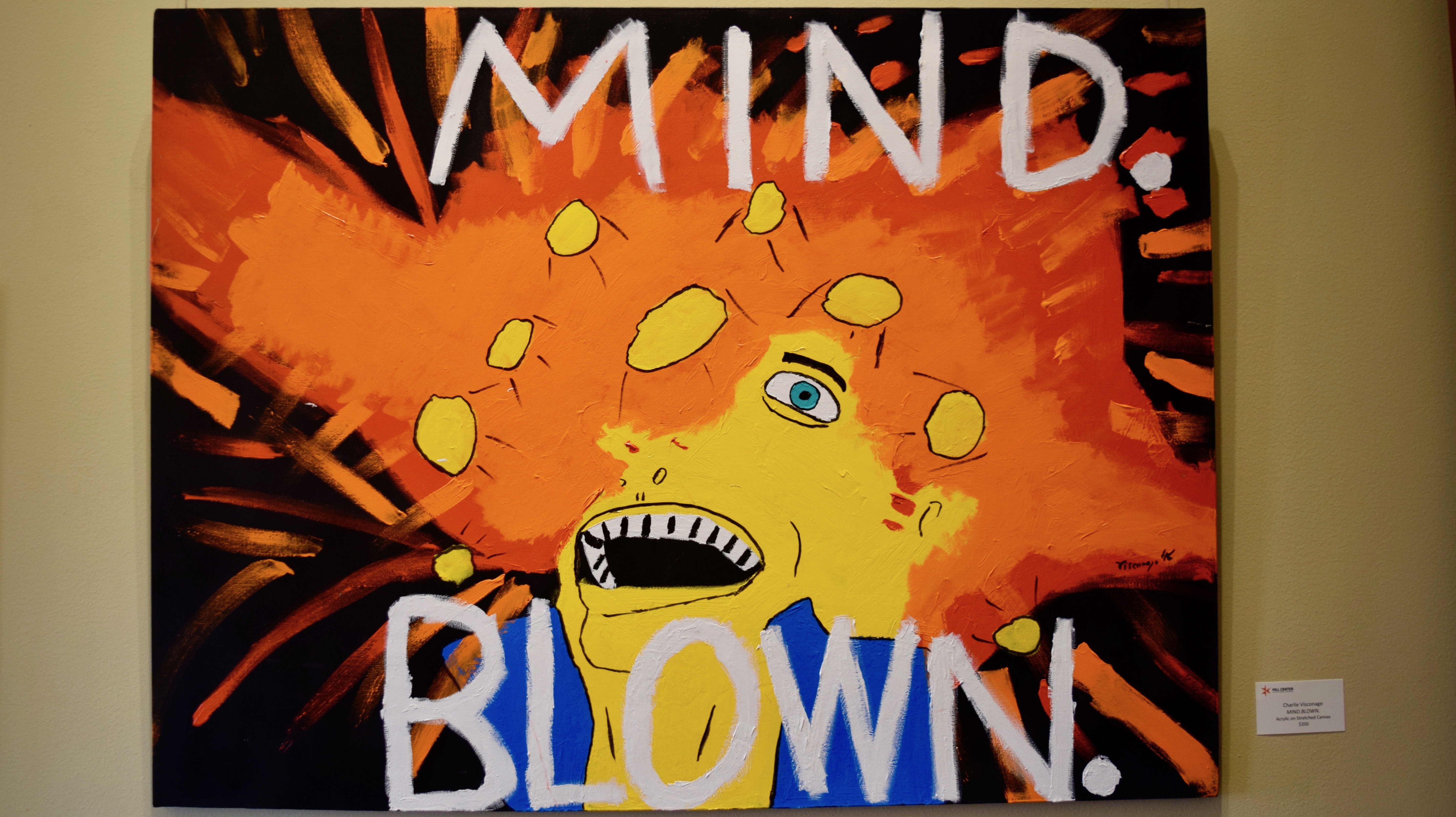 Front and center in the second room of Charlie Visconage’s exhibit—“Cool Guy Alert!”—is a 40×30 inch acrylic painting of a man’s face. His blue hair is dishevelled, his red lips are puckered and chapped; the deep bags under his eyes are highlighted by fluorescent blue paint, and his five-o’clock shadow pulls his tired look together. The painting is entitled “ME, SELF PORTRAIT”—and this is cool guy, Charlie Visconage.

“Cool Guy Alert!” will be showing at the Hill Center at the Old Naval Hospital through Feb. 25. Through the bright colors, messy brushstrokes, and hilarious blend of pop cultural and political references in his work, it is clear that Visconage uses painting as a way to cultivate his passion for humor and creativity.

Self-taught pop artist Visconage is the former host of a local talk show—The Charlie Visconage Show—on which he and co-host Taylor Durant interviewed a variety of talented D.C. comedians, musicians, and interesting individuals such as artist Dana Ellyn, comedic writer Akilah Green, and Frank Walker, the creator of the international suicide prevention website PostSecret. Twenty episodes of the show were aired over the span of 2011-2013. On Visconage’s website, he writes, “At the time, the show felt like my only way to express my need to perform. Today, I still express that need in a different way through painting.”

“ME, SELF PORTRAIT” illustrates an element of Visconage that is present in all of his paintings—a carefree spirit. His depiction of himself as slightly unkempt and down to earth matches the large, visible brushstrokes that constitute his style of painting. His often easygoing hand invites the audience to follow his painting process where the brushstrokes can be seen. Where he paints clear outlines of his subjects or the words on the canvas, he does not always paint inside the lines. Even the outlines themselves are often not smoothly shaped—to him, there is no such thing as a perfectly round or straight line. There are sharp corners, small dips, and an ever-changing line thickness. These “imperfections” paired with the use of bright, radiant colors are essential to creating Visconage’s cartoonish depiction of the world.

Brilliant colors jump off the canvas and are the driving force of Visconage’s work. His use of color sometimes matches the real world and other times does not, blurring the lines between reality and fantasy. For instance, in “CHAMPAGNE PAPI,” Drake is depicted with brown skin yet his hair is bright blue. In fact, the further away the color scheme gets from reality, the less human the subjects seem. “XOXO” features a woman with red skin, green hair, and yellow lips, all of which almost get lost behind her shimmering gold, Wonder Woman-esque facemask. Save for her conventionally female body and hair, she is less relatable than the more human “ME, SELF PORTRAIT”. Even the animals defy traditional color schemes, leaving a question of how intentional each color choice is—or if Visconage just values the adventure of color chaos.

“Cool Guy Alert!” is primarily a collection of Visconage’s 2016 and 2017 works, so it tends to echo the recent political and pop cultural climate. Not only does the exhibit include Drake and Kanye West references, but it also features a rather poignant tribute to Prince, with the title “YOU’RE GONNA BE LONELY WITHOUT ME”—likely an allusion to Prince’s lyric “It’s gonna be lonely without you.” On a more political note, “I’M AFRAID” shows a man who looks like a Founding Father winking and touching his index finger to his thumb showing that he is “A-okay” while the ominous words “I’M AFRAID” are sprawled next to his head.

Although most of the pieces in the exhibit are merely fun to look at and decipher for political and cultural messages, a few stand out for their raw and striking criticism of modern technology culture. “SOCIAL DEATH” depicts a demonic-looking person that is distressed and holding out a broken Nexus 6 with a crying emoji on the shattered screen. The phone is surrounded by a golden glow as if it were a holy artifact. The same eerie implication of the effects of contemporary reliance on social media and networking is shown in “TIME MERCH 2.0.” The painting features a person who has had half of their face removed, yet all that is underneath is a collage of logos for companies like Twitter, Snapchat, and Facebook. What makes the painting even spookier is the bloodied, removed flesh that has been drawn into the lower right corner of the canvas, indicating a loss of humanity to social media.

Among all the paintings in “Cool Guy Alert!”, the centerpiece is undeniably “19 FART’N TURTLES” which depicts exactly what you might imagine—19 turtles swimming together and releasing clouds of green gas. It is the largest, most expensive piece for sale in the exhibit, and it has an entire wall to itself, save for a short blurb about Visconage. It is clearly his pride and joy and for a good reason. It is impossible not to crack a smile when you look at the piece, and the longer you try to seriously analyze it, the funnier it seems to become. “19 FART’N TURTLES” is an absurdly hilarious painting that unequivocally showcases Visconage’s sense of humor and love of art.

Charlie Visconage’s paintings are bright, entertaining, and fun to both look at and try to decode.  His art is relatable and engaging, each painting a puzzle with subtle, and blatant, cultural references. The laughter and knowing nods that follow the “A-ha!” moments of solving each puzzle make “Cool Guy Alert!” an amusing and enjoyable place to spend the afternoon. The impression left by Visconage’s work can be described in the two words written boldly across the last painting visible on the way out of the collection—”MIND. BLOWN.”