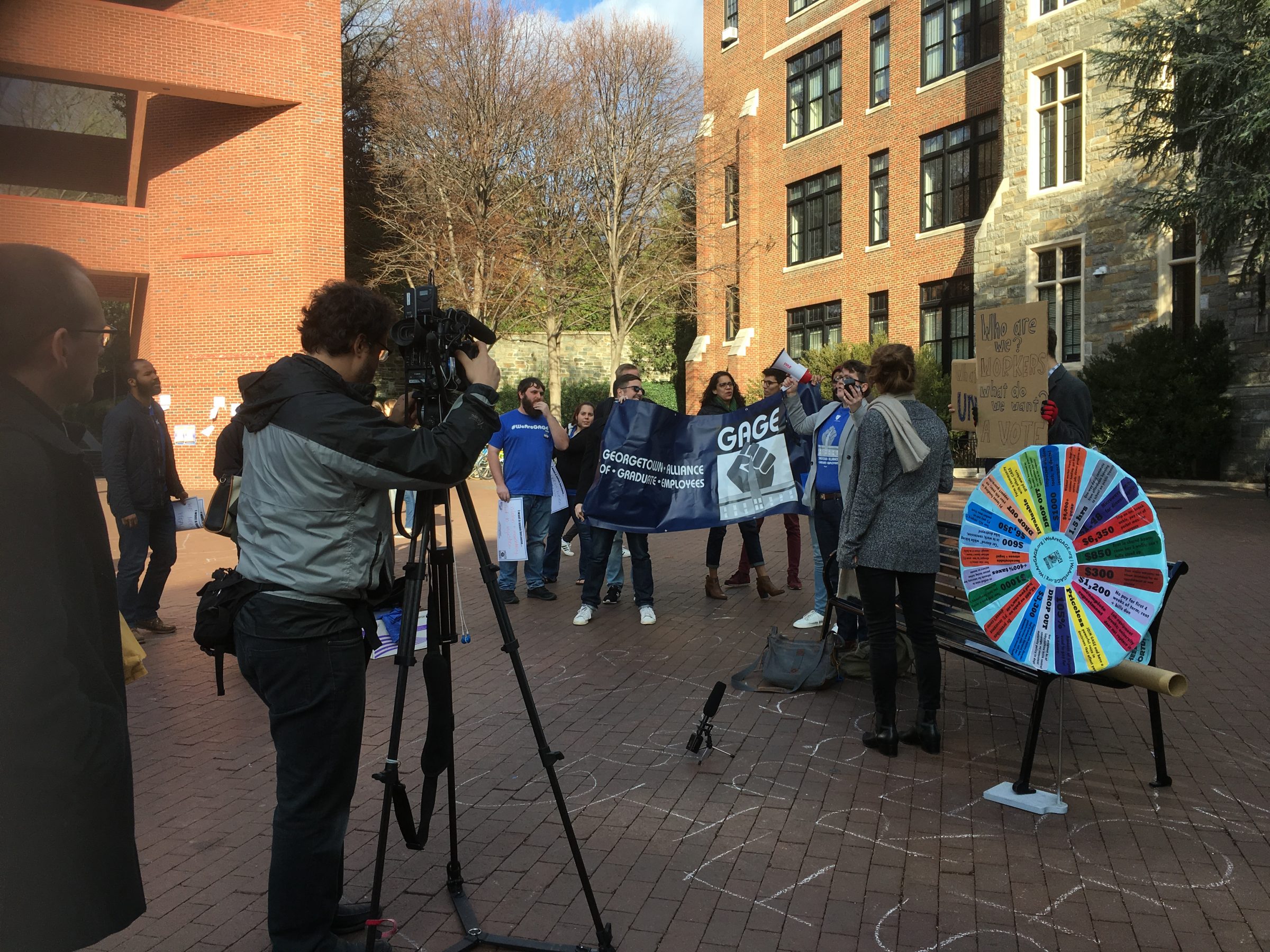 Georgetown University will consider a Georgetown Alliance of Graduate Employees (GAGE) proposal to allow a neutral arbitrator to conduct an election on the recognition of a graduate student union by the administration.

In an email to the student body on Jan. 10, Provost Robert Groves and Executive Dean Edward Healton wrote that the university received a proposition from GAGE to have a private organization unaffiliated with the National Labor Relations Board (NLRB) conduct an election to decide whether the university will recognize the union.

“[T]he university is seriously considering this proposal to determine whether it might provide an opportunity for a framework that recognizes that our graduate students’ relationship with the university is fundamentally an educational one, while also responding to some graduate students’ desire to have a stronger voice in our continuing work to create the conditions under which they can flourish,” wrote Groves and Healton.

In December, the university decided not to voluntarily recognize GAGE as a union on the basis that graduate students were fundamentally students, not workers. According to the decision, working graduate students involved in research or teaching are not covered by Georgetown’s Just Employment Policy which protects the right of workers to organize.

A majority of the members on the university’s Advisory Committee on Business Practices (ACBP), a group dedicated to advising the administration on campus labor issues, resigned in protest over the university’s decision not to recognize GAGE or consult the ACBP on the matter.

The ACBP members present passed a unanimous resolution in support of GAGE’s recognition and then resigned from the board in a Dec. 7 meeting.

“This partial reversal from their steadfast denial of our legal status as workers to now being willing to negotiate a third party election is the DIRECT result of our collective actions and our support from faculty, alumni, undergraduates, fellow grad workers, and the Georgetown Community as a whole,” GAGE wrote in the post. “[W]e plan to keep up the pressure to ensure that the voices of our workers are heard and that they have a seat at the table.”

If the university allows a third-party organization to arbitrate a vote, it will join other universities in the decision to bypass the NLRB, including Cornell University and New York University. Cornell held an election for official recognition of the Cornell Graduate Student Union in April 2017 through the American Arbitration Association (AAA), but the results were determined by the AAA to be too close to decide.

Hailey Huget, a sixth-year PhD student, noted that an election outside the NLRB would mean the university could not sue the federal government to overturn the vote. She explained that this sort of challenge could even result in the overturn of the NLRB’s 2016 decision that allowed graduate students to organize collective bargaining units in response to a suit from Columbia University’s graduate student union.

“Overturning the Columbia decision would take away collective bargaining rights for grads all over the country, something GAGE (and we very much hope the Georgetown administration) is not interested in doing,” Huget wrote in an email to the Voice.

The university released a webpage along with its new decision which includes guidelines for faculty to discuss unionization with students as well as resources to learn more about graduate student unionization at Georgetown.

“Georgetown is deeply committed to working with all graduate students to provide a supportive academic environment in which our students can flourish,” reads the website. “We encourage all students to work with us in our ongoing efforts.”

Union election negotiations continue as GAGE agitates for an agreement