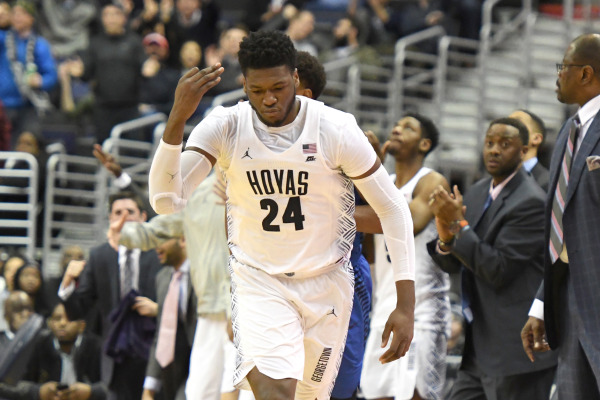 The Georgetown men’s basketball team (13-7, 3-6 Big East) could not hold on to its late lead Wednesday night, falling 74-73 to DePaul (9-11, 2-6 Big East) in heartbreaking fashion. It was a back and forth affair at Capital One Arena right up to the very end when junior guard Eli Cain sunk the game winner for the Blue Demons with eight seconds remaining to hand the Hoyas their sixth conference loss midway through the Big East schedule.

DePaul took an early 4-0 lead, but by the first media timeout, the game was knotted up at seven. This was just one of eight times when the score was even in a hotly contested matchup . The game remained close until just after the under-eight minute timeout when DePaul freshman forward Paul Reed flew in for a putback layup as Georgetown failed to box him out. This gave the Blue Demons a seven point lead, their largest of the game at that point.

After the game, DePaul head coach Dave Leitao spoke about his team’s ability to win the battle on the glass. “They are a very good rebounding team, but we’ve done a good job all year long,” he said. “Rebounding is the one staple we’ve done all year long.”

Following a game in which his team was outrebounded 38-27, Georgetown head coach Patrick Ewing spoke about his frustrations. “We have to be a better rebounding team if we want to be successful,” he said. “The brunt of it is on [junior forward Marcus Derrickson’s] and [junior center Jessie Govan’s] shoulders.” Govan and Derrickson, the Big East’s second and fourth leading rebounders respectively, combined for just eight boards against DePaul.

Two free throws from Cain at the 4:11 mark of the first half brought the Blue Demons’ lead to 12 before a three-pointer from Georgetown freshman guard Jamorko Pickett put an end to the 7-0 run. The Hoyas had trouble stopping Cain throughout the game, as the junior totaled 27 points on 10-15 shooting, far exceeding his season average of 11.8 points per game.

Ewing was frank about his team’s struggles to defend the game’s leading scorer. “He just made shots. That was just it. He made shots.”

Pickett made another three and sophomore guard Jagan Mosely followed that up with a layup on the next trip down to top off a 10-2 run from the Hoyas in response to the Blue Demons 7-0 spurt. Going into the halftime break, Georgetown trailed just 37-33.

The Blue Demons began the second period with a commanding 15-7 run, including three three-pointers, and took a 14 point lead just over five minutes in. A minute later, though, Derrickson sparked a 13-0 run for the Hoyas with back to back three-pointers to bring them within just one point. Two possessions later, Derrickson, who led Georgetown with 23 points overall, handed his team its first lead of the half with a reverse layup at the ten minute mark.

Leitao was always conscious of his opponent’s ability to get back into the game. “I kept saying during our timeouts ‘They’re gonna come back,’” he said. “‘We’ve got to counter-punch.’”

Neither team would lead by more than two for the remainder of the game. Pickett hit a three-pointer to give the Hoyas a 63-61 advantage, but DePaul immediately responded with two straight baskets at the seven minute mark. The eighth, and final, tie of the game came with 2:06 remaining as Derrickson sunk two free throws. With just over a minute to go, DePaul senior forward Tre’Darius McCallum tipped in a three-point miss by junior guard Max Strus to give his team a two point advantage. Ewing called a timeout and drew up a play that saw Mosely find Derrickson for his fourth three of the game, giving Georgetown a one point lead with 50 seconds to go.

During postgame interviews, Mosely reflected on the play and his recent chemistry with Derrickson. “I’ve been playing with Marcus since I got to campus,” he said. “Pick and pop is kind of what we do.”

The Blue Demons were unable to score initially on their final possession, as Strus missed a three-pointer from the right side, but the Hoyas were unable to corral the rebound and DePaul got a second chance to win the game. The ball went to Cain who dribbled left, pulled up, and hit a well-contested mid-range shot to put his team on top. Georgetown had no timeouts remaining, so Mosely dribbled the length of the court only to miss a runner from the right side in the final seconds.

Cain led all scorers with 27 points while his teammates, Strus and Reed, added 19 and 11, respectively. Derrickson topped the Hoyas with 23 points, while Pickett scored 19 and Mosely notched 10. Georgetown’s leading scorer on the season, Govan, was noticeably quiet, putting up just five points on 2-7 shooting.

Despite the disappointing result, Mosely told reporters about his teammate’s positive locker room message. “Marcus [Derrickson] was the one that spoke up today. He said, ‘The season’s not over. We still got time. Not a lot of time but we still got time.’”

The Hoyas next face off against Creighton (16-5, 6-3 Big East) on Saturday away in Omaha, Nebraska. Tip-off is slated for 8 p.m. ET. Follow @GUVoiceSports on Twitter for live updates and breaking news. 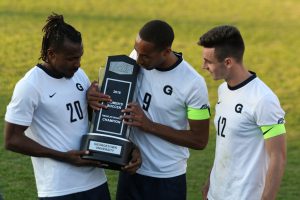 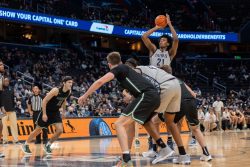 Georgetown falls on the road to No. 20 UConn in another defenseless blowout 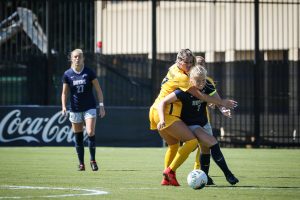